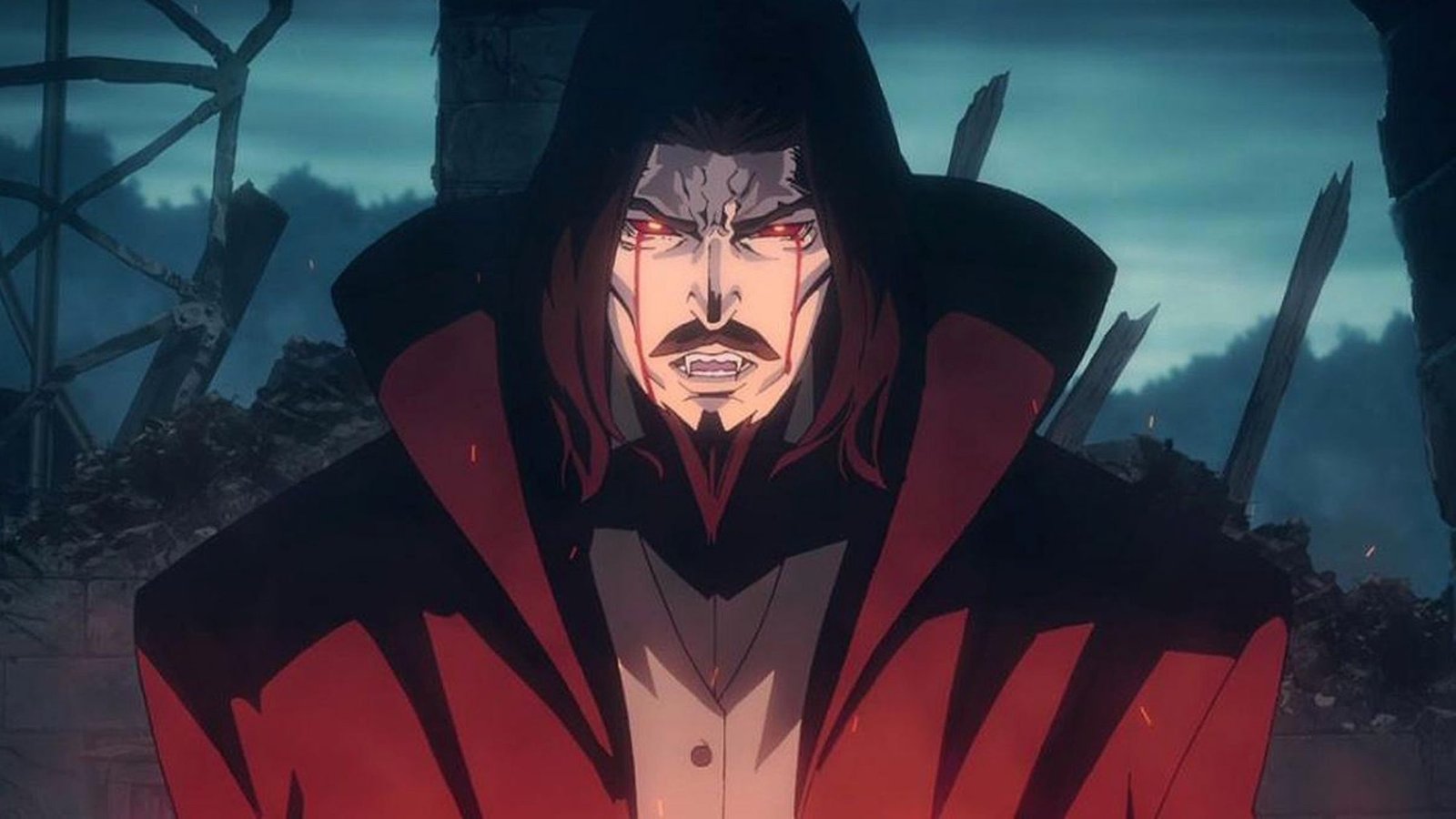 Here we will talk about the anime series 13 Animes Like Castlevania, and Castlevania was a truly fabulous feast for the viewers making a separate place their hearts with their amazing characters and a beautifully sequenced story. This was very popular among youths and teenagers and had a great demand among them.

This was a drama, dark fantasy, action, adventure, and horror-based anime produced by Frederator Studios, mua film, and tiger animation with a total run of 32 episodes and was aired on Netflix streaming services with a running time of about 22 to 31 minutes.

The story goes on as there was a vampire named count valid Dracula Tepes and he announced that the people of whole Wallachia will pay their lives after his wife was burned after being falsely accused of witchcraft. He founded an army of demons to overrun the country which led to fear among the people about their lives and had distrust too. To counter this, Trevor Belmont, who was an outcast monster hunter stands against his forces along with the magician sypha blades and Dracula’s dhampir son Alucard.

This was so popular among the fans that they started demanding anime series which are similar to Castlevania. Sir, here we are with the 13 Animes Like Castlevania.

This is the first series of 13 Animes Like Castlevania, the show based on an action, suspense, urban fantasy-based anime produced by brain’s base on JNN (MBS, TBS, CBS) and was aired from January 8, 2010, to June 25, 2010, with a total run of 24 plus 2 OVA episodes.

The Story goes as a young boy named Mikasa Ryugamine who dreams of living in a big city ends up moving to Ikebukuro to attend naira academy with his friend and he comes to know about mysterious gangs and their peculiar and absurd way of styling and abilities of members of it and also different adventures of them.

This is the 2nd series of 13 Animes Like Castlevania series, It is an alternate history, mecha, and military-based anime with two seasons aired, the first one was produced by the sunrise studio and was aired from October 6, 2006, to July 29, 2007, on JNN (MBS) with a total run of 25 episodes. The second season was aired from April 6, 2008, to September 28, 2008, with a total run of 25 episodes too.

The story of the anime goes as and exiled Prince Lelouch VI Britannia had grief in his heart about his mother’s brutal murder and wanted justice from his father, but was not paid attention by him. Throughout the whole series, he is in a chase of acquiring power to provide justice to her dead mother.

This was an adventure, fantasy, and martial arts-based anime produced by Nippon Animation and was aired from October 16, 1999, to march 31, 2001 on FNS  (Fuji TV) with a total run of 62 episodes.

The story of the anime goes as a young boy named Gon freecss was told throughout his life that both his parents were dead. But his father’s apprentice told him that they were still alive, which lead him to leave for an adventure of finding him and exploring various characters and adventures throughout the series.

The story of the anime goes as the lead Tatsumi, who was a fighter, leaves for the capital to search for a way of making money to assist her poverty-stricken village along with her two childhood friends and came to know that the noble family, who hosted her intended to kill her just like her friends and as the story continues, she ends up being a part of the Night Raid, which was a revolutionary force.

MUST-READ|| Who Does Tatsumi End Up With In Akame Ga Kill?

It is an adventure, epic, and historical anime produced by wit studio and was aired from July 7, 2019, till the present date on NHK general TV with a total run of 24 episodes.

The story of the anime is all about the Vikings and their adventures. It goes as fifteen years ago, Thors snorreson, who was a Viking commander, won a sea battle and lived a peaceful life with his wife Helga. In the year 1002, his son thor Finn started to long for seeing the paradise called Vinland and then his adventures continue throughout the whole series meeting amazing characters and difficulties too.

It is a dark fantasy and supernatural thriller anime and the first season of it was produced by Pierrot and was aired from July 4, 2014, to September 19, 2014, on Tokyo MX, TV Aichi, TVQ, TVO, AT-X, Dlife with a run of total 12 episodes.

The story goes on as a student named kaneki, who somehow survived a deadly encounter with her date rize kamishiro, who revealed herself as a ghoul in front of him and tried to eat him too. He was rushed to hospital and after a transplant of an organ from a ghoul, he was also transformed into a half-ghoul. He started to crave to eat human flesh and tried to eat his own flesh too. A coffee shop “Anteiku” was run by ghouls who thereafter taught him how to live his new lifestyle. He had a lot of adventures thereafter which is really worth watching.

It is a mystery, science fiction, and supernatural thriller anime produced by bones studio and was aired from April 6, 2007, to September 29, 2007, on JNN (MBS, TBS) with a total run of 25 episodes.

The story goes on as ten years ago before the events of the series, A ‘ heaven’s gate ‘ appeared in South America followed by ‘hell’s gate’ in Tokyo creating havoc on the landscape and manipulating the sky. At that time ‘contractors’, the people with special abilities, capable of supernatural feats started to counter the situation without revealing it in the public. The events shown in the series are surely going to give you goosebumps and you would definitely cherish the feeling while watching it too.

The story of the anime goes as a man named guts was a mercenary and was taken by the mercenary group which was also known as the band of hawks. It is continued as their leader Griffith sacrificed his followers for becoming one of the god’s hands and to continue his dream of ruling a kingdom of his own. There are a lot of adventures and characters which are really going to make you feel amazed and excited.

This story is based on an assumption that after demise, people are sent to one of the many mysterious bars run by bartenders serving as arbiters inside a tower in the afterlife. They have to compete in death games with their souls in the line. People who died at the same time were sent to a quindecim bar.

It is a mystery, psychological thriller, and supernatural thriller anime series produced by Madhouse studio which was aired from October 3, 2006, to June 26, 2007, on Nippon TV with a run of a total of 37 episodes.

The story goes on as a high school student named Light Yagami finds the death note, which was a mysterious black notebook that had the ability to kill anyone if the user knows both name and face of the target. He uses the book to kill high-profile Japanese killers and then international killers and had a lot of encounters and adventures throughout the whole series.

The story is shown about the Taisho era in Japan. It continues as tanjiro kamado and his sister Kazuko kamado seeks a cure for the nezuko’s demon curse. Both get entangled in the affairs of a secret society known as the demon Slayer corps. Which was involved in waging secret warfare against demons going on for centuries. The demons were actually former humans who sold their humanity for the sake of power.

It is an adventure, dark fantasy, and steampunk anime series which was produced by bones studio and was aired from October 4, 2003, to October 2, 2004, on JNN (MBS, TBS) with a run of a total of 51 episodes.

The story goes on as Hohenheim and Dante perfected methods for making the philosopher’s stone and achieved immortality by transferring their souls and intellects into other bodies as they age. Hohenheim was gradually overcome with the guilt of taking lives to make the stone and left Dante behind. The story is really mysterious and full of actions and surely will make its viewers thrilled after watching it.

It is an adventure, dark fantasy, sword, and sorcery anime series which was produced by madhouse and was aired from April 4, 2007, to September 26, 2007, on Nippon TV with a run of a total of 26 episodes.

The story of the anime begins as there was a fictional medieval island where humans are plagued by Toma ( humanoid shape-shifters that feed on humans ). The organization was a group that created human yoma hybrids to kill yoma for some price. The female warriors in the series were wearing armored uniforms and were known as ‘claymores’ among the public. In the series, yoma and claymore are warriors and are powered by demonic energy called yoki, which provides the shapeshifting abilities and extreme strength.