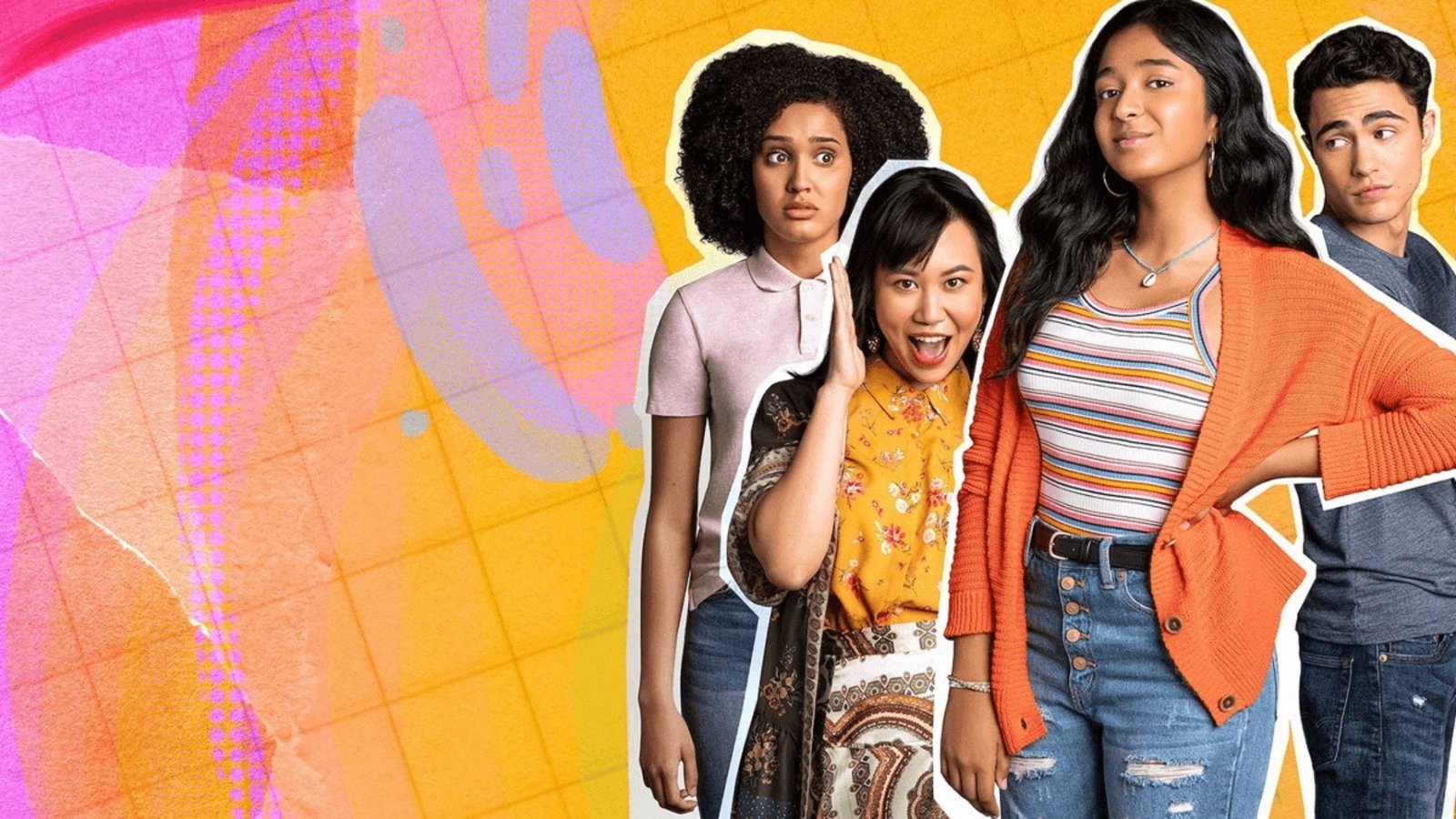 We all have been through that time when we have just ended a series and are sitting there in front of the screen thinking what now? “What do I do now on the bus ride back home? What about when I have a meal? Or when I cannot sleep and it’s 3 in the night?”

Never have I ever is just one of the shows that can do that to you. It is not shocking given that its creator is the great Mindy Kaling herself. The series shows a young Indian American girl Devi that goes through some tough, comical, and romantic times as she slowly walks into adolescence going to her high school. The cast of the show has done a great job not just in the series but also with their charming personalities and looks that have kept the audience hooked to the show.

So, if you too are thinking the same do not worry, we have got you covered. Here is a list of 13 shows that shall interest you and save you from missing Paxton and Devi that much. Read along to find the suggestions and start right away.

For a British version of the show you can go ahead and watch this series.  If you judge by the name, you’ll think it is all about sex but the show is much more than that. Being the son of a sex therapist, the protagonist Otis learns a lot about sex education which leads him to start a little business at school. The show is filled with heart-touching stories about the discovery of sexual preference, sexual health, and sexual assault.  It’s a group of individuals with diverse personalities going through day-to-day relationships which makes it more relatable.

A Netflix original, On my block is a tv series that shows four close-knit friends going through the drama that is high school while sharing some laughs, emotions, and relationships. This series stands out from others and is at the same time much alike to Never have I ever because they both are a representation of what is life in high school as a person of color. The series is set in a made-up block called Freeridge in Southcentral Los Angeles. As the lead cast, the show has Siera Capri playing the role of Monse Finnie, Ruby Martinez Jr playing Jason Genao, Jamal Turner playing Brett Gray, and Cesar Diaz playing Diego Tinoco.

Just like Never have I ever Gilmore girls is a show that beautifully highlights the relationship of a mother and daughter. The series has Alexis Bledel playing Rory Gilmore and Lauren Graham playing Lorelai Gilmore and over the original seven seasons has had some amazing supporting cast like Melissa McCarthy who plays Lorelai’s best friend, Scott Patterson who plays Lorelai’s love interest among many others. This is an old series that ran for 7 seasons but then 13 years later the series came back for a miniseries named Gilmore Girls: A year in life.

In 2011 MTV brought forward a tv series that has Ashley Richards playing the lead character Jenna Hamilton. Though the time and year of schooling are different for both the shows there seems to be a lot of things common between them. Just like Devi Jenna faces a mishap that puts her on the map of her high school. After an accident that others misconstrue as a suicide attempt, a now-famous Jenna starts a blog to convey her feelings which in turn leads her to get close to the popular kid Matty played by Beau Mirchoff. Matty does not want his friends to know about this but a yearning Jenna goes through a struggle of hiding the same. During this, she meets a third wheel Jake played by Brett Davern that makes her question if Matty is the kind of guy she wants to be with.

Based on the famous book SIMON VS THE HOMOSAPIENS AGENDA by Becky Albertalli was made a movie named Love, Simon.  This is about a young teen that goes through the pressure of accepting his sexual orientation which is different from what the social convention dictates and revealing it to his friends and family. As both the book and the movie were such a success the audience was gifted with a beautiful tv series Love, Victor.  The role of Victor in the series is played by Michael Cimino who asks for help on the issue from Simon from the movie played by Nick Robinson. The series brought the movie character and threaded him to the story in a beautiful way.

Never have I ever covers both the aspects of Hollywood’s version of high school – relationships and friendships. The beautiful portrayal of the bond between Devi and her friends is something that makes us want to call the old schoolmates and have a good laugh.  Set in the 90s Irish town London Derry, Derry girls is a series that shows the friendship of a group of girls who go through the troubles of relationships, get popular while bringing some disorder in their otherwise mundane lives. The Irish accent makes it a little tricky to get the fast jokes but it’s worth a watch.

Set in Los Angeles this is a story of two teenagers trying to make it through all the social and high school drama while joking around and representing what the young generation that time goes through in a funny yet subtle manner. Although the storyline sounds common to several other such movies and series the comedy and fantastic youth portrayal by the actors makes it stand out. The lead cast of the show is Esther Povitsky playing Esther and Benji Aflalo playing Benji. The show could not be very popular hence got canceled by the network after two seasons but to the ones who enjoy laughter it still deserves much more credit.

For this show before we tell you more let’s ask you something? Do we have to reel you in to watch this? Even when the show starts the co-creator that gave us Never have I ever? The Mindy Project is series that shows the life of a young gynecologist living in New York trying hard to manage her love life and career. While she is good at her job, she hardly has any luck finding a good mate. The storyline again might sound common to various other shows but it is the amazing comedy from Maling’s end playing Dr. Mindy Lahiri that makes it so different.

This is an amazing teen comedy-drama produced by Judd Apatow and Paul Feig which was telecasted on NBC. The series has a very charming cast with Linda Cardellini as Lindsay Weir, John Francis Daley as Sam Weir, James Franco as Daniel Desario Samm Levine Neal Schweiger, and many others. The setting of the show is in a town in Detroit shows Lindsay and Sam going to the same school but joining two polar different groups. While Lindsay joins the group called Freaks, Sam joins the group called Geeks. The story is wrapped around the teenage life and interaction of the two groups.

MUST-READ| 8 Shows Like Suits To Watch If You Really Love The Show!

Saved by the bell is an American comedy series that throws light on high school life, both its comedy and challenges. The show was originally made in 1993 but a reboot of it was made in 2021. The audience did not expect the new show to be as good as the old one but much to their surprise this one turned out to be even better.  Graced with an amazing new cast like Mario Lopez and Elizabeth Berkley Lauren this show also makes a reference to the old cast and is a very funny and heartwarming series to enjoy in a single run.

Just like Devi Jane the virgin’s Jane has a tough household and goes through a hard time becoming more mature with life. The show is about the life of Jane who lives with her mother and grandmother and following the teachings of her grandmother decides to save herself for her husband when a gynecologist appointment goes wrong by the doctor impregnating Jane by accident. This s the watershed moment in Jane’s life which leads them to go through various tough times and also creates a love triangle that he both emotional and extremely funny to watch. The show also shows the life of a cancer survivor and has some really funny narration by Anthony Mendez.

We love Never have I ever for the love and friendship but what stands out? What is it that we find thrilling? Well, that’s undoubtedly the amazing love triangle where with Devi we too keep juggling our feelings for both Paxton and Ben, we have arguments over it with our friends counting the cons and pros as if it is all our very own. If that is how you feel too do watch this show that keeps throwing the love triangles on you and through the run you will keep switching from one pair to another without blinking of course as the on-screen chemistry of the characters is what interests you here.

What makes Never have I ever really emotional is the hardships and hatred our Devi has to face while doing nothing wrong but being caught in a bad situation. Also being a person of color doesn’t bode well for both Devi in Never have I ever and Chris in this series. The series has a strong and amazing narration by Chris Rock on whom the series is loosely based. It shows his journey of surviving in a school is the only black kid.

So just as promised above are 13 amazing tv series worth binge-watching once you face the hard time of ending Never have I ever. Enjoy them while you wait for the return of Devi in season 3.

MUST-READ| 13 Shows Like One Tree Hill You Should Be Watching Right Now!