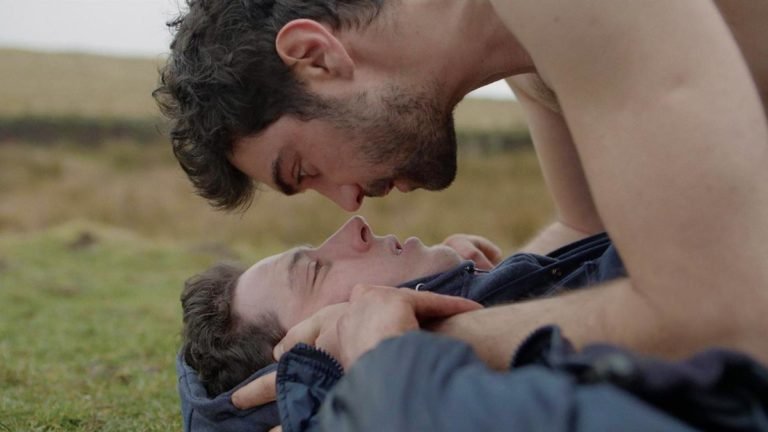 Netflix is a treasure trove of films from many genres and themes. There is a great deal of LGBTQ+ movies to watch on Netflix, whether for pride month or just for fun. It’s always exciting to learn about movies that tell stories that defy stereotypes. Netflix offers a diverse selection of gay films, a good many of them which have gone on to become timeless masterpieces. The inventory of LGBTQ-centric entertainment has never been richer, with award-winning drama series, romantic comedies, and dramatic documentaries.

Before the outbreak, LGBTQ community meeting spaces were already failing, and the homosexual community is now more divided than ever. Good gay cinema was almost non-existent for a long time, or it played into outdated, tokenizing stereotypes. At first, producing lesbian, gay, bisexual, and transgender films was extremely difficult due to societal biases. However, as time has gone, the perspective has shifted, and the reels now depict various shades of love. Even with this in mind, heteronormative stories have dominated mainstream cinema for decades.

Netflix, thankfully, has a plethora of titles in cinema, television, and humor to help you recall what it’s like to be a part of a community.

To celebrate diversity and pride, here are some of the best gay movies to watch on Netflix.

Henry Golding and Parker Sawyers of Crazy Rich Asians star in Hong Khaou’s compelling drama about a young Vietnamese British man’s homecoming to his hometown. Kit, a British man of Vietnamese ancestry, traveled back to Saigon for the first time in almost 30 years after leaving with his parents at the end of the Vietnam War when he was six years old. He plays an expatriate returning to his kins in Vietnam, and he carries his gay soul seeking effectively. Meanwhile, a romance blossoms with a guy enacted by Parker Sawyers, which is aided by the two characters’ obvious heated chemistry. Some viewers may complain about the fact that the heterosexual Golding plays a gay character, but what’s most quietly innovative about “Monsoon” is that it doesn’t make a show out of homosexuality at all. Monsoon gained significant critical acclaim as a romantic comedy with poignant messages about recognizing one’s roots.

It comes across as a typical indie film at points, but it ultimately subverts many of the genre’s preconceptions. The film also deftly depicts challenges that are specific to queer teenagers. Fionn O’Shea plays Ned Roche, the only out gay boy at an all-male boarding school obsessed with rugby. The part garnered O’Shea a (well-deserved) prize at the FilmOut San Diego LGBT+ film festival for best actor in a leading role. To wrap it up, this Irish movie is about romance, kindness,self-recognition, and the triumph of good over evil.

Also Read: Sydney To The Max Season 4 Release Date: Is It Renewed?

This intense, acclaimed coming-of-age story is punctuated by some exquisite eye candy elements! The plot includes both young homosexual love and heartbreaking tragedy. This plot, as the bodies on show, is a work of art, told in a non-linear manner with tension and surprise. It may be disrespectful to spoil it. The film, written by Christophe Charrier, is a personality study in which a homosexual man reminisces about his adolescent years and a formative experience that continues to haunt him to this day.

I Am Jonas is a great movie, and the finest of queer movies on Netflix right now, whatever you want to call it. This French drama has a limited scope, a short run time, and a personal story. The film is a journey through a gay man’s character and reflections of his adolescent years and a formative experience that continues to haunt him to this day.

The cinematic adaptation of Joe Mantello and Ryan Murphy’s successful revival of a landmark play centered on a gathering of gay men in 1968 New York City. One of the most lovely aspects of the movie is the story’s trajectory. Zachary Quinto, Matt Bomer, and Jim Parsons are among the ensemble cast members. The 1968 Off-Broadway production was revived and brought to Broadway. It was well-received by critics. It was translated into a film by the same cast, which is currently available on Netflix and captures the spirit of being a queer man in the 1960s—a time when many people’s roots were wiped from public view.

This film begins like any other teen film: Alex Truelove (Daniel Doheny), a high school senior, wishes to have intercourse with his sweetheart. This one, however, has a twist. He falls for Elliot (Antonio Marziale). But don’t worry: it’s still got all the classic adolescent movie tropes: a little angst, charming moments, and sexual exploration. In a nutshell, Alex Strangelove follows Alex Truelove (Daniel Doheny), a well-rounded high school senior with a beautiful girlfriend Claire (Madeline Weinstein), and clear plans about the future before him, and wants to complete his last adolescent milestone by losing his virginity. When he meets a good-looking and pleasing gay kid from the next door in the town, things get complicated, and he unwittingly embarks on a roller-coaster journey of sexual identity.

The highest-grossing LGBTQ film in Taiwan’s history is now available on Netflix in the United States. Patrick Kuang-Hui Liu’s drama, based on true events, depicts the tender love between school-going teens during the fall of martial law. Homophobia was rampant during the period, and openly gay people were usually shunned by society. A-Han and Birdy’s narrative develops against this backdrop as their relationship blossoms into something more.

Sudhanshu Saria wrote and directed the romantic Indian movie Loev (pronounced love). It stars Dhruv Ganesh and Shiv Pandit as two best mates who go on a weekend trip to the Western Ghats and explore their complicated emotional and sexual relationship. Dhruv Ganesh, the film’s lead actor, died of tuberculosis shortly after the film’s completion. The picture is dedicated to him in this way. He plays Sahil, a New York-based artist who has just had a disagreement with his love Alex in the film.

Funny Boy is based on Shyam Selvadurai’s novel of the same name, and it tells the story of Arjie, a teenage Tamil boy who lives in Sri Lanka during the build-up to the Sri Lankan Civil War. The film follows Arjie’s sexual development from a little boy to an adolescent who falls for his male classmate in the years leading up to the 1983 upheavals, as political tensions between Sinhalese and Tamils rise. Arjie’s personal awakening intertwines with rising exterior turmoil when he falls in love with a friend of his. Deepa Mehta, an acclaimed Indo-Canadian filmmaker, initially gained international acclaim in 1996 with “Fire,” a revolutionary homosexual romance that was suppressed in India after screenings resulted in violent demonstrations and the destruction of cinema theatres.

Though “Funny Boy” is a lot more chaste film, its representation of the 1983 riots, often known as “Black July,” the anti-Tamilian pogroms that kicked off Sri Lanka’s 26-year civil war, may cause greater controversy. Mehta has weaved these nuances with a painterly touch, stacking the competing forces of social and behavioral identity into a turn of color, emotion, and memory, as if with a breezy wave of a hand.

When his late father’s primary insurance beneficiary is discovered to be his hidden male lover, a teenager kid named Song finds himself in a convoluted triangle. Song’s mother battles with her grief and possession, desperate not to lose another loved one’s favor to the elusive man, while Song’s allegiance is stuck between the two struggling widows and widows. “Dear Ex” loosens the tension and focuses the audience’s attention on love itself — whether it’s between male and male, male and woman, or mother and son — as a film directly about how queer identity interacts with supposedly straight marriage.

Prateik Babbar, Neeley Mehendale, and Anjali Sivaraman feature in Cobalt Blue, an Indian romantic drama film written and directed by Sachin Kundalkar. It’s based on the same-named novel, which tells the narrative of siblings who fall in love with the same person, and how the events that follow ruin a traditional Marathi family. The film was supposed to premiere on Netflix on December 3, 2021, but it was pushed back to April 2, 2022. Cobalt Blue depicts a universe when it was still illegal to love someone of the same gender.

After a disastrous breakup, a gay guy (Jesse Plemons), a failing gay comedy writer in New York, comes home to his conservative family in Sacramento to be with his dying mother. That means returning to a traditional, pious home and reuniting with a family from which he has been alienated for a long time. Molly Shannon plays a cancer-stricken mother in this beautifully comedic semi-autobiographical drama directed by Chris Kelly.

Colin Firth plays George Falconer, an English professor in 1962, in this Tom Ford drama. He is mourning the loss of his partner, Jim, but Jim’s family refuses to accept him. George makes the decision to take his life, but he realizes there is more to life when he decides to do so. George examines the days of his lives, the simple routine things, and has a revelation of feeling, and a comprehension of life comes to George; and because of how the tale has been told—full of modest appreciations—Tom Ford’s A Single Man finishes with a kind of completion that feels too perfect.

A group of down-on-their-luck Broadway performers upends a quiet Indiana town by rallying behind a schoolgirl who simply wants to go to prom with her girlfriend. In this musical directed by Ryan Murphy, Meryl Streep, Nicole Kidman, James Corden, and Kerry Washington lead a megawatt cast. In this Netflix film, there are old-fashioned, unwanted, and religious undertones at play; it’s a message of inclusivity, that’s the story’s brand, with musical moments thrown in for good measure.

Also Read: How to Watch That Dirty Black Bag Online From Anywhere?

Circus of Books is a documentary film directed by Rachel Mason, written by Rachel Mason and Kathryn Robson, and featuring Karen Mason, Barry Mason, and Rachel Mason that was released in 2019. Circus of Books, a bookshop and gay pornography business in West Hollywood, California, and the Silver Lake district of Los Angeles, is the setting for the film. Rachel Mason follows in the footsteps of hybrid documentarian Kirsten Johnson but adds a dash of Borscht belt humor, Jewish culture, and gay history to the mix. Her affectionate tale of her parents, Barry and Karen Mason, and how they came to own one of LA’s most prominent gay cruising venues is the ideal blend of personal exploration and compelling storytelling. Karen is the film’s comedic star and the typical Jewish character.

The film King Cobra is an adaptation of Andrew Stoner’s book Cobra Killer. It depicts the story of actor Brent Corrigan’s life and the assassination of Bryan Kocis. Bryan Kocis, through his label Cobra Video, was producing gay pornographic films at the time. Dive into the alley of homosexual pornography, with some steamy moments.

Michael Mayer directed and Chad Hodge wrote Single All the Way, a 2021 Canadian Christmas romantic comedy film. When a gay guy (Michael Urie) visits home for Christmas, he convinces his closest buddy (Philemon Chambers) to pretend to be his boyfriend, only to be put up on a blind date by his mother (Kathy Najimy). Also starring Luke Macfarlane, Barry Bostwick, Jennifer Robertson, and Jennifer Coolidge are Luke Macfarlane, Barry Bostwick, Jennifer Robertson, and Jennifer Coolidge. It’s not uncommon for people to believe that two best friends should date. Especially when it includes two gay men who have lived together for the previous nine years in the same apartment! At the very least, this is how all straight people feel about their homosexual pals. The rest, though, is the turning moment.