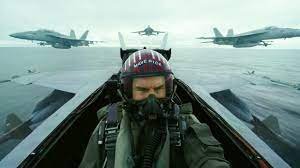 When we say Top Gun, we instantly click upon the aviation-themed cult classics that still stay the most relevant even years after their release. After these many years, Top Gun Maverick is itself a genre specification. The team of director Tony Scott and Tom Cruise playing the role of a Maverick Air pilot where multiple combats are glorifying the US aviation and with a hint of romance in the center had gained huge limelight and viewership. The story has no typical villain mode in it. It is just a story, a classic cult starring Tom Cruise as Pete Mitchell. Today we are going to go through 17 such movies that seem similar to the Top Gun Maverick Style.

A 2014 movie of the Sci-fi Adventure Genre, was released on 7th November 2014. Directed by Christopher Nolan and with a huge box office collection of $701.8, the movie was the talk of the town for its amazing plot. Having won several accolades the best of it all is having won the academy award for the best visual effect. The story about finding a new home for human beings after the earth becomes regressive for life to continue, this was a concept never touched before. With an IMDb rating of 8.2/10 and 72% rotten tomatoes the movie’s cast includes Matthew McConaughey, Anne Hathaway, Jessica Chastain, Mackenzie Foy, Michael Caine, and Timothy Chalamet, and others. This is now available to watch online over Amazon Prime videos.

Thank You for Your Service

A 2017 war drama movie depicts an American biographical war drama. This was released worldwide on October 15, 2017, at the Heartland Film Festival and theatrically released on October 27, 2017. Written and directed by Jason Hall, it was his directorial debut. The movie is based upon the plotline of a non-fiction book called Thank you For you service written by David Finkel. The story about the turmoil and mental stress the war returnees go through, and the guilt they have in themselves for not being able to save a life is life-altering. Adam’s fight with such a thing with the help of his wife is what the story is about. The cast of this movie consists of Miles Tenner, Haley Bennett, Joe Cole, Amy Schumer, Scott Haze, Beulah Koale, and others. Today this movie can be watched upon Amazon Prime Video subscription. The movie currently has an IMDb rating of 6.5/10 and 77% rotten tomatoes.

A 2019 war action movie directed by Roland Emmerich, this movie has a current IMDB rating of 6.7/10 and 42% rotten tomatoes. With a cast consisting of Ed Skrein, Woody Harrelson, Patrick Wilson, Luke Evans, Mandy Moore, and others, this is a movie that depicts the defeat of the Japanese fleet near the midway atoll. The movie was released on 7th November 2019 and has been successful in depicting the epic battle of midway. This battle had huge historical significance in the Pacific theatre Of WWII.

A historical drama movie released on October 12, 2018, this movie has a current IMDB rating of 7.3/10 and 87% of rotten tomatoes. This is the story about a NASA test pilot and his fellow team members who shut themselves up in their suits and jumped into a mission, a space mission to set the first foot on the moon. This movie was directed by Damien Chazelle and the cast consisted of Ryan Gosling; Claire Foy; Jason Clarke; Kyle Chandler; Corey Stoll; Christopher Abbott; Ciarán Hinds; Shawn Eric Jones and others. The movie is produced by Spielberg and is based upon James R. Hansen’s The first man: Life of Neil A. Armstrong.

A 2013 Sci-Fi action category movie, this has a current IMDB rating of 7 out of 10 and 53% of rotten tomatoes. When Hack Harper, a drone repairman saves a woman from Earth who constantly appears in his dream, after the earth was attacked by aliens, he starts questioning his own identity and sets on several revelations. The story about Jack Harper is that which is covered in the movie. This movie which was directed by Joseph Kosinski was released in April 2013. The cast consists of stars like Tom Cruise; Morgan Freeman; Olga Kurylenko; Andrea Riseborough; Nikolaj Coster-Waldau; Melissa Leo among others.

A 2017 crime action movie starring Tom Cruise Sarah Wright, Domhnall Gleeson, Caleb Landry Jones, Alejandro Edda Jesse Plemons among others, this movie was released on 17th August. A movie featuring a commercial airline pilot Barry Seal strengthens the plotline of the story. The story is about Barry, who after being involved in illegitimate smuggling and drug services, turns into an informant to reduce his tenure of punishment in the jail. Directed by Doug Liman, the movie made a box office collection of 13.49 crores USD and is based on Life of Barry Seal. The movie is produced by Brian Grazer; Brian Oliver; Tyler Thompson; Doug Davison; and Kim Roth.

READ MORE: 12 Movies Like The Bob’s Burger That You Must Watch

Also a 2017 drama movie, this movie currently has an IMDb rating of 7.3 and 87% rotten tomatoes. This was released on 8th October 2017, this is story is based upon a GQ article titled No Exit and is by Sean Flynn. With a box office collection of 26.3 million dollars, the cast of the movie consists of Josh Brolin, James Badge Dale, Jeff Bridges, Miles Teller, Alex Russell, Taylor Kitsch, Ben Hardy, Thad Luckinbill, and Jennifer Connelly among others. The movie’s plotline is about a group of the hotshot crew from California when ignores the Superintendent of the Fire and rescue crew about the potential extent of danger that can be caused by the fire, he decides to certify his crew as a hotshot crew. Directed by Joseph Kosinski, it is written by Ken Nolan and Eric Warren Singer.

A 2006 action drama movie starring Ashton Kutcher, Neal McDonough, Melissa Sagemiller, Clancy Brown, Brian Geraghty, and Sela Ward among others was released on 29 September 2006. The movie, written by Ron L Brinkerhoff has a current IMDB rating of 6.8 out of 10 and 37% rotten tomatoes. Directed by Andrew Davis this is a movie about Swimmer Jake, who was sent to teach and train at an academy after his horrific and tragic experience with a storm where he lost his crew.

A 2001 war action movie directed by Michael Bay, this movie has a current IMDB rating of 6.2 out of 10 and 24% rotten tomatoes. The movie was released on 25 May 2001 and has a box office collection of 449.2 million dollars. The cast of the movie consists of Ben Affleck, Kate Beckinsale, and Josh Hartnett as the protagonists. Written by Randal Wallace, this is a story of war mixed with romance and history.

An action sci-fi from the marvel cinematic universe, Captain Marvel was released on 8th March 2019. Directed by Anna Boden and Ryan Fleck, the movie made a box office collection of 112.8 crores USD. With a current IMDb rating of 6.8 out of 10 and 79% rotten tomatoes, the movie is about a stranded Kree Member on Earth, who later teams up with SHIELD agent Nick Fury and has an uneventful turn of events in her life.

READ MORE: 25 Best Body Swap Movies That You Can Watch

A movie released in the year 2001, its genre is specifically War and Action. This movie was released on 30 November 2001 and is about A Navy Helicopter Pilot Lt Chrish Burnett, who worked for the United States to observe the peace treaty as a part of NATO. However, an unusual whim got him into trouble when he decided to ditch his usual route and in his rendition spot the Serb forces, well, the enemies spot him too and take him down. In a situation when he is behind the lines of enemies and is being searched, the only lifeline he has is being rescued. Directed by John Moore this is a Jim Thomas and John Thomas story.

A comedy war genre movie of 1991, Hot Shots is a movie with a current IMDb rating of 6.7 out of 10 and 84% rotten tomatoes. The movie was released on 31st July 1991 and is directed by Jim Abrahams. The movie which is produced by Bill Badolato is about a mentally inefficient fighter pilot. This pilot’s complexity increases when is assigned to destroy the Nuclear Plants of Saddam Hussein while competing with a rival pilot. Considered to be a parody of Top Gun, the cast of the movie consists of s Charlie Sheen, Cary Elwes, Valeria Golino, Lloyd Bridges, Jon Cryer, Kevin Dunn, Bill Irwin, and Kristy Swanson among others.

This 1990 movie starring Tom Cruise, Robert Duvall, Randy Quaid, Nicole Kidman, Michael Rooker, and Cary Elwis was released on 27 June. With a current IMDb rating of 6 and 38% rotten tomatoes, the film had a box office collection of 15.79 crores USD. A movie from Paramount Pictures Studio is a story about a budding racer who faces an uncalled accident after being signed by a famous and big brand. After recovery, the journey becomes even more complicated when there is a notorious addition who wants to defeat and harm him simultaneously. This is a movie which is directed by the OG Tony Scott and is produced by the team members, Simpson and Bruckheimer.

READ MORE: Are The Last Survivors Based On A True Story?

With a current IMDB rating of 7.7/10 and 83% rotten tomatoes, this is a 1992 movie based upon a 1989 play. The play was by Aaron Sorkin and directed By Rob Reiner. The story about Daniel Kaffee. A US military lawyer deals with a case where a fellow marine was suspected to be murdered by two US Marines. As the plot of the movie proceeds, shocking revelations are made and thus, the final suspect is indicated as a colonel. The eventful plotline was based in Cuba, at the Guantanamo Bay Naval Base, Cuba. This movie was released on 9th December 1992 and has won several accolades including the People’s Choice favorite Movie. Another Tom Cruise Starrer also has a cast consisting of Jack Nicholson, Moore, Kevin Pollak, James Marshall, J. T. Walsh, and Kiefer Sutherland among others.

Another war action coming from the directorial of Tony Scott, is a 1995 movie, about the captain of a submarine. This movie was released on 12 May 1995 and had collected a box office collection of 157.4 million dollars. With a current IMDb rating of 7.3 out of 10 and 88% rotten tomatoes, this movie is about a captain and deputy facing a mutiny due to a conflict of interest thus, creating rifts and completion. Competition for getting the command of the ship. What led to this was the captain not getting a green signal for launching an attack from his deputy. A story by Michael Schiffer and Richard P Henrick is produced by Don Simpson and Jerry Bruckheimer. The movie consists of an elaborate cast of Denzel Washington, Gene Hackman, George Dzundza, Viggo Mortensen, James Gandolfini, and Matt Craven among others.

An action-drama cinema from 1997, G I Jane is a movie directed by Ridley Scott. With a current IMDB rating of 6 out of 10 and 51% rotten tomatoes, the story is about the hardships of a female lieutenant being rendered an opportunity to prove herself and earn a place in the NAVY SEAL. With a box office collection of 48.2 million dollars, the story is written by Danielle Alexandra. The cast of the movie includes Demi Moore, Viggo Mortensen, and Anne Bancroft among others.

One of the most celebrated adventure movies made in the year 1983, this is a drama history with a current IMDB rating of 7.8 out of 10 and 96% rotten tomatoes. The movie was released on 21 October 1983 and was directed by Philip Kaufman. The plot of the movie covers how not one person had clue to run or get selected into a space program after Chuck Yeager breaks the sound barrier to the Mercury 7 astronauts. This drama action movie is starred Sam Shepard, Ed Harris, Scott Glenn, Fred Ward, Dennis Quaid, and Barbara Hershey among others.

READ MORE: Where To Watch Fast And Furious Online?