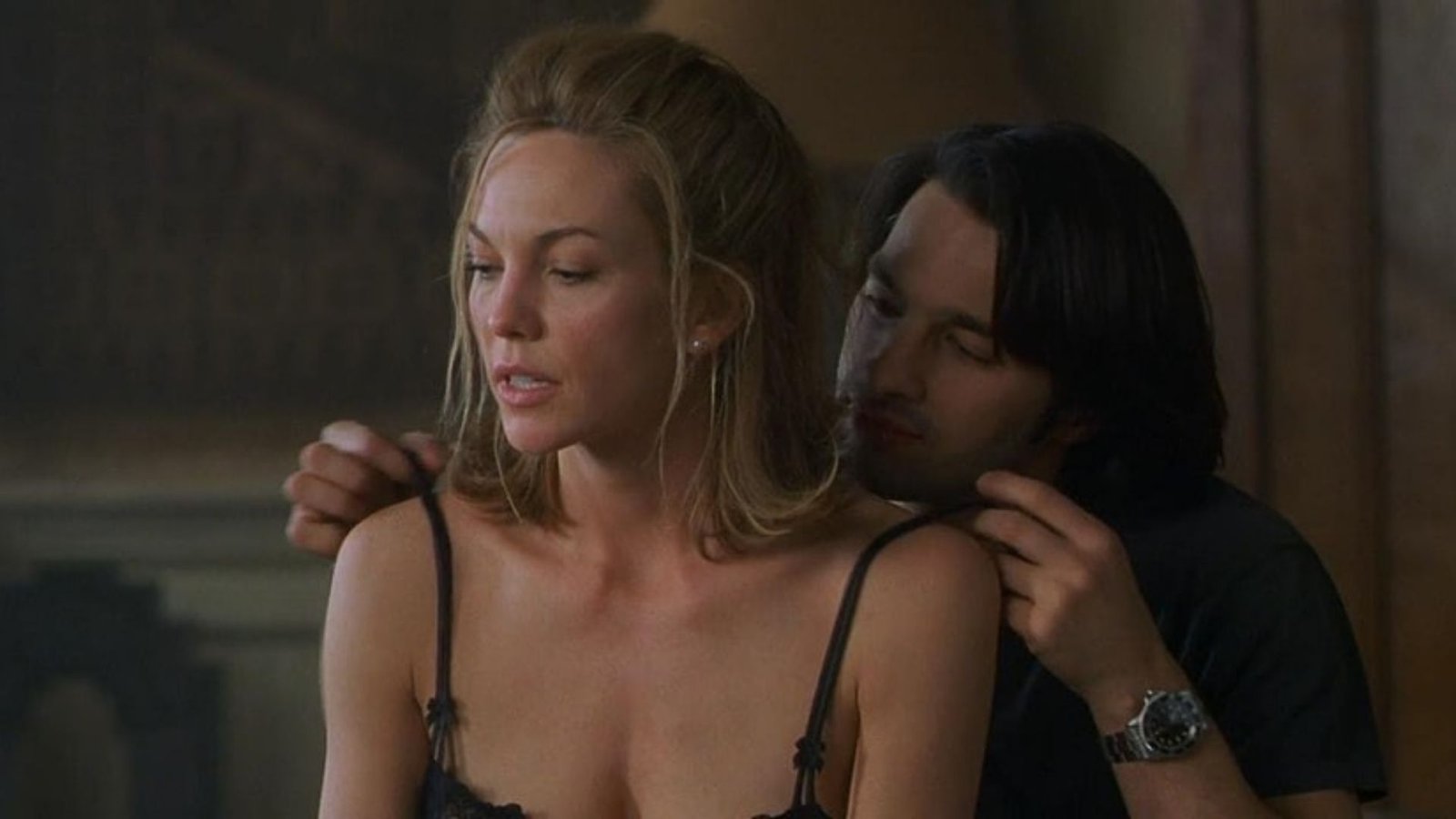 One of the most popular OTT platforms Netflix has something to offer to everyone, irrespective of their age group, no wonder why it is everyone’s favorite! Netflix and chill is many people’s favorite thing to do when they are free from a long day at work.

The OTT platform has a variety of content falling under different genres. One such genre is adultery in which Netflix has a lot of hot and sizzling content for its viewers. If you have been looking for something sizzling to watch, then we have a lot of recommendations for you! Keep going to know what you can watch next during your time on Netflix and chill!

Released in 2018, this is a Netflix original that revolves around the story of a woman who is an adult webcam performer. There comes a time when she discovers that an eerie presence has replaced her on the internet. The movie not only features some sizzling content but has some frightening scenes as well!

Released in 2020, this movie is very very popular for its hot and spicy content and was a great hit on Netflix! The viewers have even gone to the extent of saying that it’s an Italian version of 50 Shades Of Grey! Although it was criticized by some viewers for being misogynistic, irrespective of everything, it was one of the biggest hits on Netflix!

Released in 2017, Amar is a Spanish movie about a couple Laura and Carlos. Both of them experience love for the first time with each other. After coming to terms with the harsh realities of life, they come to the realization that the driving force that brought them together starts driving them apart after a year of togetherness.

Released in 2017, the movie is a romantic one that features two millennials in Los Angeles who explore the hook-up culture driven by social media. Influenced by this culture, they land themselves into relationships that make them push their emotional and physical boundaries.

Duck Butter is a sensual comedy movie released on 27th April 2018. The story of this movie revolves around two women who are tired of their shattered and dishonest relationships. They then try to do something different and sort of experiment. They make a pact to spend continuous 24 hours with each other and have sex on the hour. This pact of theirs creates something new but doesn’t go as they had planned in their minds.

Released in the year 2017, this is a sensual romantic film that is based on the novel by Naomi Alderman, launched in 2006 by the same name. The story has been set in North London and it revolves around a woman who comes back to the strict and stern Orthodox Jewish Community after living for many years in New York, for her father’s funeral. As she gets to know the community more and more, things start becoming clear to her as to why she was ostracised by the community.

Released in 2020, After We Collided is an American Romantic Drama Film that was directed by Roger Kumble, and written by Anna Todd and Mario Celaya. The movie is based on a book released in 2014 by the same name. The story is about Tessa, who is having a hard time maintaining her relationship with Hardin. Tessa goes through a dilemma that could affect their lives significantly and change their lives forever.

Released in 2020, An Easy Girl is a romantic comedy. The movie is about 16-year-old Naima who is the daughter of a cleaning lady and lives in Cannes. While she was deciding what she wants to do with her life, her 22-year-old cousin Sofia arrives from Paris to spend the vacation with her. Sofia is a carefree girl who is very liberated sexually and doesn’t hesitate before using her charm to take advantage. The two spend a lot of time together exploring nightclubs, pubs, and beaches. They then meet Andre and Philippe. Andre is an art collector and Philippe is his regular matchmaker. The two men are rich and fascinating and invite the girls to their yacht. The story then moves on to how Sofia influences the life of Naim and what changes come in her life after she spends time with Sofia.

I am Jonas is a French romantic drama movie that was released in 2018. The movie features the protagonist Jonas and his two phases of life which are tangled together. Phase 1 is the year 1995 when Jonas was a quiet and shy introvert teenager romantically involved with Nathan, and phase 2, 18 years later, is his present when he is an attractive and energetic man in his thirties, who is looking for a balance in his life. The movie has an IMDb rating of 7/10 and a very impressive 100% rating on Rotten Tomatoes.

The story features young gay love and also a saddening tragedy. Interestingly, the plot also features interesting suspense. The movie is basically a blend of many interesting things apart from sensuality.

Released in April 2017, Berlin Syndrome is a thriller and drama movie with an IMDb rating of 6.2/10 and 76% on Rotten Tomatoes. The story is all about a young photographer who goes out on a night out and meets a teacher. She goes to her apartment. The story takes a very unexpected turn when the teacher, who seems to be disturbed holds the young photographer captive in his apartment in Berlin. The movie is directed by Cate Shortland and is available on Entertainment One apart from Netflix. The story of this movie has been inspired by Melanie Joosten‘s novel the plot of which is almost the same. It is about a tourist who is held captive by a handsome teacher after a passionate one-night stand.

6. The Girl Next Door

ALSO READ: 20 Best Films Of Brett Goldstein: Which Is Your Favourite?

If you are a fan of suspense, thriller, horror, and adventure then you might find The Babysitter quite fascinating. The movie is in the genre of horror and comedy and has an IMDb rating of 6.3/10 and 78% on Rotten Tomatoes. It was released in the year 2017. The movie revolves around Cole, a 12-year-old boy who has a crush on his babysitter. He, later on, comes to know that as innocent and cute as she seems, her babysitter is a part of a murderous satanic cult that consists of teenagers. Cole now has to put a stone in his heart, keep his love aside and save himself from the wrath of his babysitter.

Apart from some sensual and comic scenes, the movie also has some disturbing and frightening scenes which involve brutal deaths by shooting, stabbing, falling, and hanging. Some disturbing scenes show child abuse. The scenes include Cole being treated harshly and being bullied verbally as well as physically.

Directed by Cristina Jacob, is a comedy film based on the book Suck It, Ramona! by Andrei Ciobanu who is a Romanian comedian. Released in 2019, Oh Ramona! is a Romanian film centered around the new generation of teenagers and the change in their mentality and behavior.

The movie is from the point of view of Andrei, the protagonist, who steps into adulthood and is trying to deal with its various aspects including romance. He is seen in the movie, sharing his experiences of all kinds, good and bad with a pinch of humor and irony. The interesting part about the movie is that Andrei is in love with two girls at the same time and the difficult thing for him is that he now has to make a decision. The first girl is Ramona, who is the hottest girl in the school and wants to hook up with him. Andrei denies her at first because of confusion which starts a whole series of unfortunate events. On a vacation, he meets another girl, Anemona who fascinates him with his innocence and sincerity.

You Get Me is a drama, romance, and thriller movie which has been directed by Brent Bonacorso and written by Ben Epstein. The movie was released in 2017 and starred Bella Thorne, Taylor John Smith, Halston Sage, Anna Akana, and Nash Grier. The story of this movie is about a couple of Tyler and Alison who are high school students. Both of them are head over heels for each other but things turn South when Tyler discovers that Alison once used to be a party animal who would drink heavily and sleep around. After knowing this, Tyler breaks up with her and has a one-night stand with Holly. After spending the weekend with Holly, Tyler patches up with Alison but things don’t turn out to be as easy as they seem! Holly becomes obsessed with Tyler and tries to ruin things between him and Alison.

Through My Window is a Spanish romantic film that was released in 2022. It was directed by Marçal Forés and is based on the book of the same name by Ariana Godoy. The movie has a rating of 5.4/10 on IMDb. The movie is all about Raquel narrating the story of her life. Raquel has a crush on his neighbor, Ares who is living with his two brothers. He hacks her Wi-Fi password and that was when she gets to meet him. Raquel is just crazy about him and ardently wants him to fall in love with her. Ares also starts developing feelings for her and things get more intense. Despite his family’s objections, Ares falls hard for Raquel.

Cuddle Weather has very different and unique content which is not only entertaining but also represents a very different perspective. Released in 2019, with an IMDb rating of 6.1/10, Cuddle Weather is all about the story of two sex workers who realize that prostitutes are only engaged in sex and not lovemaking. They then decide to develop a relationship as cuddle partners and it was then that they realise that they want something more than just sex.

We hope that you found our suggestions helpful and are going to enjoy the movie recommendations. Happy Netflixing!

ALSO READ: Top 12 Movies Like Brahmastra: Which One Would You Watch?