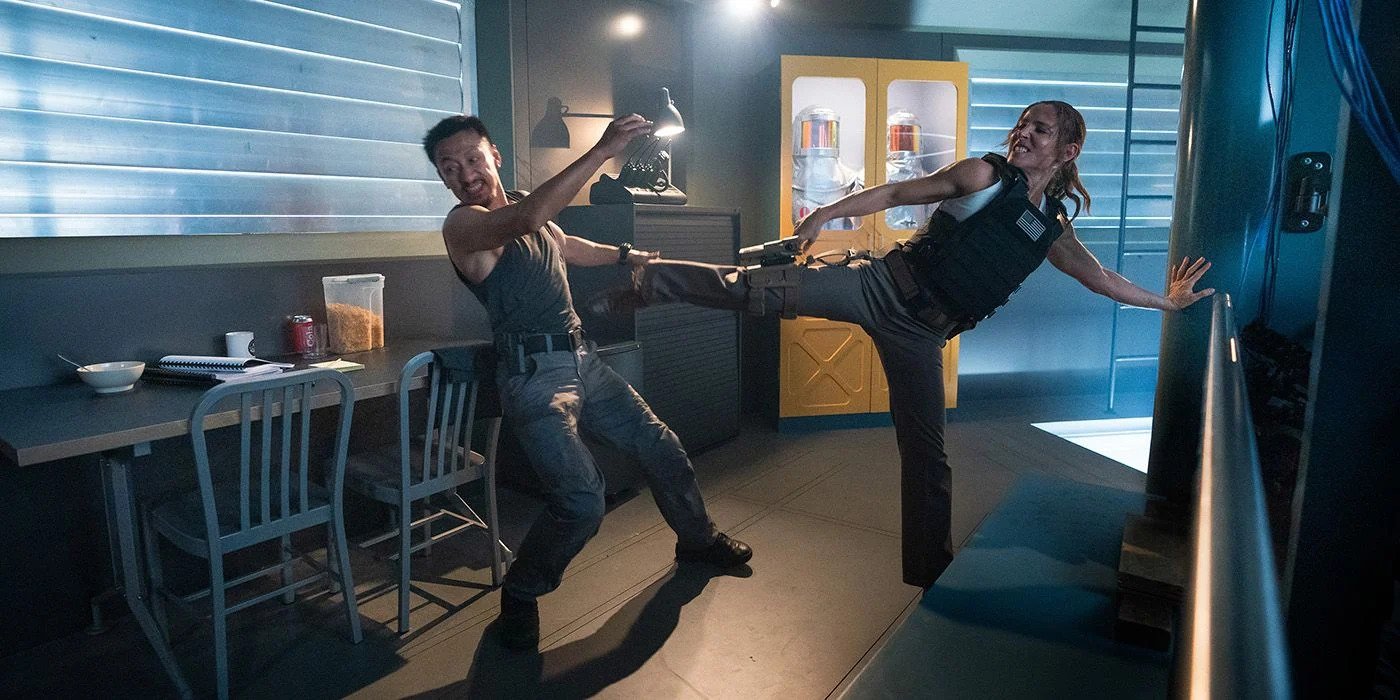 Do you like action-adventure dramas? Then, here’s something new in store for you. The new Netflix movie Interceptor, an American-Australian movie, is all set to entertain its audience with all the action and adventure drama.

The Interceptor movie puts Army Captain J. J. Collins is in the limelight and needs to use her years of tactical training and military expertise to stop Alexander Kessel, an ex-military officer on a twisted and terrible mission.

Now, let’s come to the main topic: 20 Movies Like Interceptor.

Frédéric Forestier directed The Peacekeeper, a 1997 Canadian-American action movie. With a budget of $16 million only, the entire filming of the movie got shot in Montreal, Quebec.

Written by Robert Geoffrion and Stewart Harding, the storyline focuses on the US Air Force Major Frank Cross. US Air Force Major Frank Cross is assigned to protect the US president; he also has to prevent the nuclear holocaust. A group of terrorists robbed the US president’s personal communications computer. This high-functioning computer is capable of launching the US arsenal.

The 98 minutes long-running movie is set in the 90s period. John Berrie’s cinematography delivers a suspenseful and realistic style.

Directed by Steve Carver, Bulletproof is a 1987 American action movie. The movie is exciting and tense. Francis Grumman’s cinematography gave the film a realistic feel.

In the T.L. Lankford, Fred Olen Ray, and B. J. Goldman-written movie, the story takes shape in Mexico. A top-secret super tank named “Thunderblast” hidden in Mexico is under attack. A group of terrorists robs the “Thunderblast”. “Bulletproof” Frank McBain is assigned the task of getting it back; he is an ex-secret agent and now a cop.

Dolph Lundgren debuted as a director with The Defender, a 2004 British-German action movie. The movie got made with just a $6 million budget.

Douglas W. Miller wrote an interesting story that focuses on the lead character of Lance Rockford. Officer Lance Rockford is assigned a job to protect the world’s greatest terrorist Mohamed Jamar. Mohamed Jamar must remain invisible to the world. If the court declares him not guilty, the policies of the entire western world get destroyed. Lance must defend the terrorist from getting killed before the court gives the judgment.

The 90 minutes long-running movie set in a contemporary period is exciting. Philippe Martinez, Claudine Strasser, and Douglas W. Miller-produced’s movie The Defender have a serious tone.

Directed by Richard Pepin, T-Force is a 1994 American sci-fi action movie. The storyline of this movie got set in the future period.

In 1994, Joe Hart and Lenore Kletter made predictions about the 21st century. T-Force is a cybernaut unit, the last resort to law enforcement. There’s an order to disassemble T-Force.

But unfortunately, T-Force sees this as a “threat to their self-preservation”. For T-Force to survive, the cybernaut unit starts killing others. Only police lieutenant Jack Floyd can bring this to an end with the help of one of the cybernauts.

D. Kyle Johnson’s writing makes a blind ex-CIA agent the main character of this movie. The blind ex-CIA agent gets his vision temporarily restored by a special serum. But, the restored vision is superhuman-level vision. The main reason for this vision restoring is to stop his ex-mentor’s terrorism scheme.

Project Shadowchaser is a John Eyres-directed American sci-fi action movie. It is the first installment of the movie series with the same name.

Stephen Lister set the timeline of the story futuristic. In this futuristic story, a super android named Romulus leads a group of terrorists in hijacking a hospital. The main concern is the president’s daughter Sarah held hostage.

The 97 minutes-long running Geoff Griffiths and John Eyres-produced movie is raw in style, thanks to the cinematographer Alan M. Trow.

Written by Albert Pyun, Blast is a 1997 American action movie. The movie has a serious tone. The storyline is full of suspense.

The timeline of this movie provides the feel of the 90s era. The story takes shape at the 1996 Atlanta Olympics. A terrorist attack interrupts the Olympics championship, holding the US women’s swim team as their hostages. Jack Bryant, an ex-Olympic Tae Kwan Do champion and now janitor, can save them and help finish the Olympics.

Rob Kerchner and Charles Philip Moore’s screenplay involves a group of would-be burglars. These would-be burglars attempt to rob a Federal Building in Washington in the daylight. Unfortunately, their escape plan fails as the getaway helicopter crashes and causes fire in the building. The ex-security guard is present in the building and is the only one who can save all.

The 87 minutes long-running movie Heaven’s Fire provides a thrilling experience to its audience with the action-packed content and the suspenseful storyline.

David MacKay directed the Turbulence 2: Fear of Flying, a 1999 American action thriller movie. This movie is a sequel to the 1997 Turbulence movie.

Rob Kerchner wrote an engaging suspenseful story. Brendan Broderick and Kevin Bernhardt’s screenplay starts with a group of people celebrating overcoming their fear of flying by flying to LA. Unfortunately, the flight gets hijacked, and the pilot gets killed. These events bring their fear back.

The 101 minutes long-running movie consists of hijacking an airplane, rescue, fear of flying, etc. This movie is an action-packed thriller experience for the audience.

Rodney McDonald and William C. Martell wrote the movie set in the 90s era. As per the storyline, the terrorists hijack a submarine. The elite Navy Seals launched a mission to save the submarine. Here, the action begins. As things don’t happen as planned, the story takes twists and turns in this sea thriller movie.

MUST READ| 20 Best Western Anime That You Cannot Miss

Fred Olen Ray-directed movie Warlords is a 1988 American sci-fi action movie. The storyline of this movie sets a futuristic tone for this movie.

Scott Andrew Ressler’s screenplay focuses on Dow, an ex-army man. She is looking for his wife, who was taken away by the Warlords. Danny, a renegade woman, accompanies him in his search. They roam all around the terrain to find Dow’s lost wife.

Bill Gucwa and Ed Masterson wrote the storyline that follows a renegade general’s disastrous plan. General William Jacobs plans to bomb Washington. For that, he would use the top-secret jet called the Storm Catcher. But there is one problem with that plan. Only one man knows to fly the Storm Catcher: Major Jack Holloway.

The 95 minutes long-running movie Storm Catcher takes the audience to the 90s era. This action movie gives a thrilling experience to its audience.

Worth Keeter-directed Hijack is a 1998 American action thriller movie. The movie is exciting and thrilling with suspense.

Steve Latshaw’s brilliant screenplay carries out the entire story in a train. The storyline demands a militia group hijacking a train. A prestigious senator is traveling on this train. The thriller action begins as the senator is held hostage by the militia group with the other onboard passengers. It is exciting to watch how the senator and these passengers get freed.

Produced by Ashok Amritraj and Andrew Stevens, the movie consists of terrorism, hijacking, law enforcement, and more content. The 94 minutes long-running movie is an entertainer with its realistic style of cinematography.

Fred Olen Ray directed the 1998 American action thriller drama movie Counter Measures. The movie got made in a realistic, suspenseful, and raw style.

Steve Latshaw’s screenplay dictates the movie’s timeline set in the 90th and 20th centuries. US Navy medical officers Jake Fuller and Lt. Swain are the main characters of this movie. They are assigned to visit and examine a Russian submarine.

Written by Ron Mckennan, the story follows a CIA operative. The CIA operative goes on investigating to find five members of a terrorist organization. But unfortunately, all the five terrorists get killed before he reaches them and brings them in. This event takes the movie on a thriller road, increasing the suspense of how these terrorists die. The storyline is futuristic.

The movie Programmed to Kill is an Allan Holzman-directed American sci-fi action movie. The writer Robert Short has also directed the additional scenes of this movie.

The storyline of this movie is suspenseful. As per the storyline, the CIA captured a middle eastern female terrorist. The female terrorist transforms into a cybernetic killing machine after being transported to the USA. Now, the CIA wishes to use her as a secret weapon in the middle east. But only time can tell how useful she can be to the CIA.

The 91 minutes long-running movie Programmed to Kill takes the audience back to the 80s. This movie is an entertainer, a whole package of action.

Directed by John Weidner, Space Marines is a 1996 sci-fi action movie. This movie is futuristic. The love received from the audience made this movie a cult film.

In 1996, Damian Lee directed the Terminal Rush movie, a Canadian action thriller drama. This movie is an entertainer with its suspenseful thriller story.

Mark Sevi’s writing dictates the hijacking of the Hoover Dam. Brit and a psycho led a group of terrorists to hijack the Hoover Dam and demand $25 million, or they will kill the hostages. A local cop tries to save the hostages, as his father is one of the hostages. The story set in the 90s era talks about redemption and shows the lead character haunted by his past.

The 94 minutes long-running movie is exciting, thanks to its realistic style.

Jeff Etheridge, Drew Hall, and Denny Wilkins wrote the storyline set in a contemporary timeline. The story is a race of time. As per the storyline, a group of radical mercenaries creates a micro nuclear device. Now, a special operations unit needs to find and prevent the explosion of that micronuclear device in time. These mercenaries know no difference between terrorist and revolutionary.

The 94 minutes long-running movie Sons Of Liberty is suspenseful. The sci-fi action movie is an entertainer giving thrilling experience to its audience.

Icebreaker is a David Giancola-directed 2000 American action drama movie. The storyline of this movie sets the tone of the 90s era.

David Giancola’s screenplay takes shape at the Killington Mountain ski resort. Unfortunately, the Greig-led terrorist group attacked the ski resort, making everyone hostage. They have a stolen nuclear device with them. Now, only Matt Foster, ski patrol, can save all. And he is ready to do anything, as his fiancé is one of the hostages. The 90 minutes long-running movie consists of terrorism, hostage situation, nuclear threat, resort, etc. The action movie Icebreaker is a whole package of action.