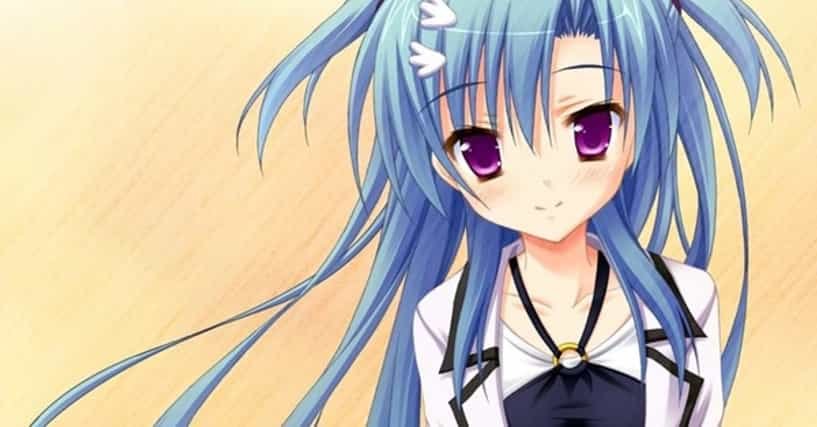 Anime has become this specific style of entertainment that has spread widely in the current scenario among teens and adults. This specific type of cartoon has its origin in Japan and the art style associated with creating this makes it quite different from the usual category of cartoons. Usually, this has become an escape world where you get to see and imagine everything that seems unachievable in our real world. May it be the large eyes, wild hairs long arms and limbs, or more? Well, what catches the attention is the long and short luscious hair flowing around covered in vibrant colors.

Today, we are here to look at the 21 most desirable or best anime blue hair girls usually referred to as bluenettes. Well, according to most anime viewers, blue-haired girls in anime are never going out of style and thus, the new character additions are a blend of old and vintage ones.

One of the main characters of both light novel and anime versions of Full Metal Panic, she is known to be a 16-year-old high school student with equal experience from Japan and the United States. For a fact, she happens to be the daughter of the UN Ambassador. The story of this anime is about a girl, whose protection duties are rendered by an agent known to be Sousuke Sagara, from the Mithril organization. After him being enrolled in the same school to render his duties, a complicated plot brews leading to the story.

The one with short blue hair and lavender eyes is often known to be Kunoichi from Amegakure. With a signature origami flower headpiece on her hair bun, she is a founding member of the original Akatsuki. Well known to be a calm, quiet, serious, and mature character of Naruto. She is also very emphatic judging by her character. In the story, she is a girl who has had a very traumatic experience that has resulted in this very serious present Konan. As per the plot of the story, she feels protective of Naruto and crosses with Naruto.

Suzuno Kamasuki, The Devil is A Part-timer

A later character from the Devil is a Part-Timer, she belongs to a different world. Due to her alien characteristics of not belonging to the earth, she is not very aware of the daily workings of the earth. However, as a character from the anime comic show, she has a very calming vibe to her which makes her worth the mention of this charismatic blue-haired anime girl.

A girl with impeccable inner strength and the capability to deal with life, she is a happy-go, lucky girl. Recognized as the cousin of the main character Yuichi from Kanon, her approach to leading a happy life and the way she thinks, and her optimism are essential attractive characteristics. What makes her a unique person is her undying effort to wake up in the morning as she is a deep sleeping character. This particular thing can also be said to be one of the few flaws she possesses, however that only makes her appealing.

A tall woman with huge long hair, Esdeath is known to be a high-ranking general in Empire. With an aura radiating dominance, leadership, and ultimate passion, she appears in the show wearing a general uniform that makes her character even stronger. A person who is always passionate about her imbibed motto, she is a very adventurous person and likes to include her motto in her adventure. A lady who has an inherited thought-process that the ‘weak would die and the strong shall survive’, she is known not to get intimidated, but rather to fight and practice with stronger opponents.

Sayaka is the perfect instance of someone who has the perfect mixture of psychopath, thriller, and pop. With her impressive past career as an idol, she is a girl, who often appears in the high school uniform and has long blue hair. The girl with a beautiful voice is chirpy, happy, and bright making sure her small but significant part in the show stands out. Her first few days in the show were brightened due to her spontaneity and she shall always be cherished for the same vibrant characteristics.

READ MORE: 10 Underrated Isekai Anime That You Must Watch

With a mindset on a mission to return Ikaros to Synapses, Nymph is a character who reminds us of Greek Mythology. Her resemblance to Greek mythology is mostly due to her long ears. However, to achieve her mission, she makes a sudden appearance in Tomoki’s living room. The one who finds humans irking, weak and annoying, her mind has a gradual change towards the humans after being with Tomiki and finally, develops sentiments of liking-ness towards the human.

Shino who has her first appearance after the SAO chapter in Gun Gale Online is a virtual game player of pro level. With impeccable sniper skills, her reality is far different from the virtual game world. In her real life, she is too opposite and scared to hold a gun. The credit for this scary feeling is to the bad experiences she has had. Girl with short light blue-greenish hair, she lives her main character dreams in VY and befriends Asuna Kirito and the Gangs.

A girl who possesses unique hobbies to transform her world as imagination, she proves to be some girl who is not ordinary. The founder of the Napping Club in school, she is a dark blue-purple bob-haired girl, she has a unique appearance of wearing one-eyed blindfolded. According to her claim, the one-eyed blindfolded is the representation of the cover of her strength or her tyrant eyes. She is an epic instance of Chuunibyou, who has a hint of drama in her life.

Girl with bangs and side braids of light blue color, Saya has the kind of blue hair that everyone wants in their real life. With an excellent ability to shoot and repair weapons, which she has learned and inherited from her father, Saya is a clever girl who should not be deceived as anything otherwise.

A second spirit saved by Shiro, Yoshino always is known to carry a hand puppet called Yoshino. A girl with blue eyes and long blue hair, Yoshino is a Kawaii girl. Her attire is a beautiful long dress and a beach hat. Her characteristics involve, that she looks like a lost child with a shy personality. Her main power is rain which represents a very sacred and solitary kind of feel.

READ MORE: 10 Anime like Scum’s Wish That You Should Not Miss

Shiro, No Game No Life

The duo Shiro and Sora are known to enter the game world, where to survive you must play. However, the blur-haired Shiro is individually a smart kid with knowledge and tactical skills. She likes to wear mid-schooler uniforms and has pale skin. Her role as imoutou is complemented by cuteness.

Apart from Shino Asada, the main character of Sword Art Online, Asuna is also known to be the one with beautiful long blue hair. Her long whitish blue hair in Gun Gale Online where she portrays the role of elves releases an aura.

Her exceptional compatibility with maid uniforms and her extreme cuteness is something that defines Rem. The show shows Rem in short blue hair adorned with Pink Knot and working with her twin demon sister Ram. Her beautiful unique hairstyling has an undeniable charm and feminine aura ooze out of it.

Someone with beautiful blue bangs and long hair, Ryuuzaki plays as a magic knight in Magic Knight Rayearth. For someone so caring, empathetic, and emotional, she can be very short-tempered and triggered. She gets very agitated, especially when it comes to her friends and the people she cares for. Always a big-sister figure, Umi is desirable when one needs someone to be there and listen.

Levy McGarden who plays an anime character in FDairy Tale is best known for her intelligence. It also must be the most important trait that makes Levy a desirable attractive and charming personality. Someone who loves reading books, and educating herself with several things, Levy accepts the challenge like no other.

Aki, who works as the main lead of this anime is seen with long luscious beautiful blue hair, bearing the nickname of the cruel princess. She is someone we all must envy. Like someone who eats anything and everything and still stays slim.If you are wondering why has she been called the cruel princess, well, because she has rejected several boys. Plot Twist: Well, she finds a major crush in Masamune himself.

A member who turns into the leader for U’s, Umi Sonoda is someone with long blue hair. With a personality inherited from her father, Sonoda is an ideal traditional Japanese lady alike. With exceptional talent in archery, she is also found singing and dancing with the members of U’s.

Strong in both bodies as well as fighting, Wendy Marvell is often disguised as shy, scared, and reserved. She is such a character who thinks about others before she does about herself and is someone with amazing character evolution.

Kind, compassionate, hardworking Chizuru has a lot of similarities with Chi-Chi from DBZ. But that is only until you are on her good side. Once you land upon the other side, you shall be thrashed badly as she never hesitates to speak her mind about the things she dislikes or punish or relay to you about it.

Someone who is often misinterpreted as too much or overbearing Juvia is known for bearing a very strong personality. Her straightforward and strong point of view towards the things and people she believes in. Juvia is known for her impeccable understanding and handling of honesty and her character evolution in the Fairy Tales is worth watching.

You can watch all these characters in their respective anime on Crunchyroll.