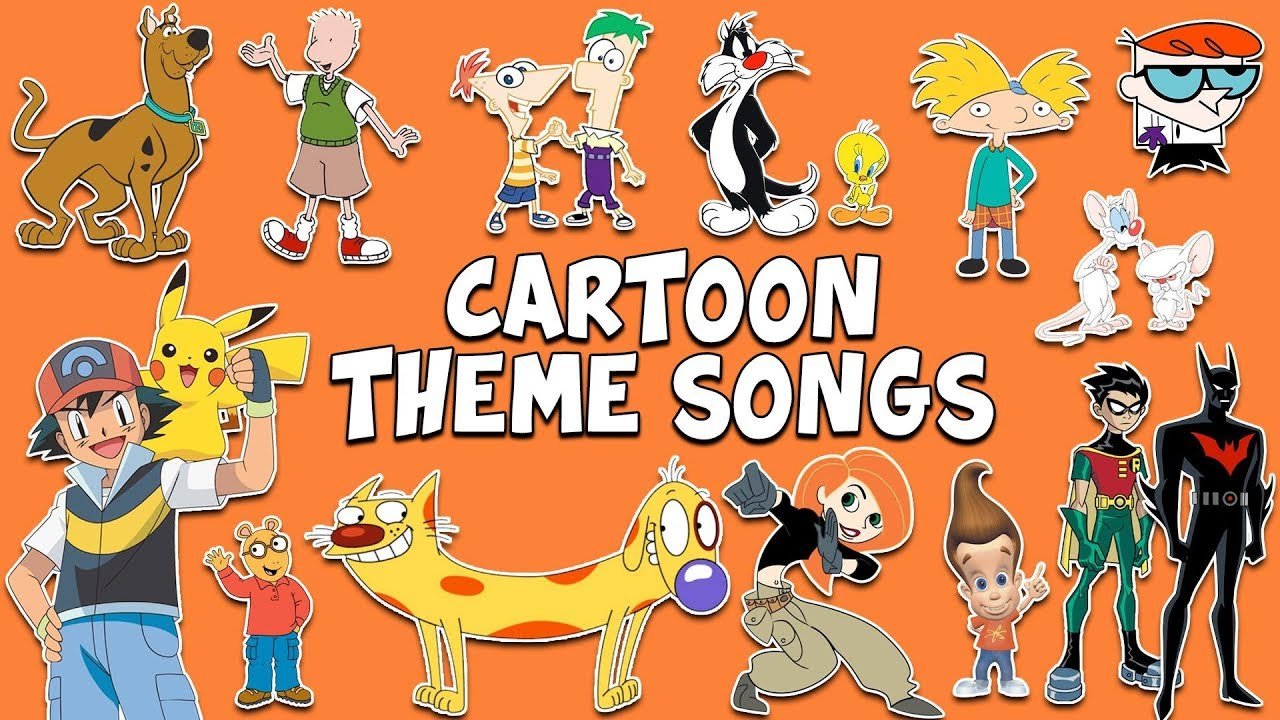 As a kid, we all watched cartoons. Some of us still watch cartoons because there is no age defined to be a cartoon lover. Watching cartoons is relaxing, and it keeps your inner child alive.

“Call Me, Beep Me!” from Kim Possible

Cory Lerios and George Gabriel wrote the theme song for the 2002 American animated cartoon show Kim Possible. Call Me, Beep Me! is one of the favorite cartoon theme songs for many who were kids during the show run.

In the song, the main character of Kim Possible tells her audience to call her if they have any trouble. You can contact her anytime; she is available 24/7. She also promises to help immediately without fail. This show showcases the best use of mobile technology.

Christina Milian recorded the 2002 opening theme song of Kim Possible. This song is a Motown-flavored R&B number. In 2015, it bagged the first rank in the “Disney Channel Theme Songs of Yesteryear”.

“Scooby-Doo, Where Are You?” from Scooby-Doo

Who does not remember Scooby-Doo? Scooby-Doo has entertained audiences from generation to generation. And it will stay in the top cartoon shows for generations to come. When it comes to this show, age is just a number. If you watched Scooby-Doo once, you get attached to the show.

Talking about Scooby-Doo, how can we forget about its catchy theme song? Scooby-Doo, Where Are You? David Mook and Ben Raleigh composed the Scooby-Doo theme song for the children’s audience. So, Paul Cook kept the arrangement of this theme song easy.

As the song is not difficult to play, a beginner musician can start learning by playing this theme song.

The opening theme song talks about the show’s main character’s origins to its audience. Guy Moon composed theme song is mostly a rap. The original theme song got its inspiration from the Queen’s “The Invisible Man”.

This cartoon show has received the love of children like no other. And the forty-one seconds of its theme song bring back childhood memories for many of us.

“Today Is Gonna Be A Great Day” from Phineas And Ferb

If you ever watched Phineas And Ferb, I am sure you must remember its theme song. It is not just catchy but a mood freshener. Performed by the band Bowling For Soup, the theme song can motivate a sad person.

In the cartoon show, they have used only fifty-one seconds of the theme song. The length of the “Today Is Gonna Be A Great Day” song is approximately three minutes and one second. The Punk Rock genre song was supposed to be a slow song.

The lyrics mention the adventures and inventions of Phineas And Ferb. Some part of the lyrics is just the imagination of the possibilities of what the boys can do.

The cartoon show Ed, Edd N Eddy is one of the favorites for most of the kids. It brings back our childhood days. And its theme song is also catchy.

The song by 8 Bit Universe is a delight to the ears. Patric Caird composed a theme song that features all three main characters of the show on a white-pink background. They hang upside down at the beginning of the theme song and then fall together. That’s when the title of the show is visible to the audience.

I am sure remembering this must bring you the nostalgia of your youthful days. Well, it’s never too late; you can listen to this theme song again, thanks to the internet.

The cartoon show Pokémon has a fan base of varying ages. This show has managed to stay the popular choice for generations. And it will continue for generations to come, as catching all the Pokémons is not that easy job.

Hoyt Curtin, Joseph Barbera, and William Hanna composed the “Meet The Flintstones” song in 1961. “Flintstones, meet the Flintstones, they’re the modern Stone Age family” became the well-known lyrics of the theme song. The theme song has become a jazz standard.

In a 2010 Music survey of 2000 UK adults, the “Meet The Flintstones” theme song received recognition as the most recognized children’s TV theme song. The famous theme song featured in the show Full House and Fuller House.

The most deserving mention for the best cartoon theme song goes to the “DuckTales” theme song. Interestingly, Disney was initially looking for a poppy radio song instead of a cartoon song.

It took only 45 minutes for pop music writer Mark Mueller to write the lyrics of “DuckTales”. Jeff Pescetto performed the theme song and made it a big hit. The theme song plays before and after every episode of the DuckTales cartoon show.

Felicia Barton performed the theme song at the opening of the 2017 reboot of the cartoon show. This theme song is one of a kind. And if you have not heard this theme song yet, you must. It is catchy and energetic.

“I Wanna Be Famous!” from Total Drama

Who can forget the “I Wanna Be Famous!” theme song from the Total Drama cartoon show? As a child, we all heard it and dreamt of becoming famous someday. A few became famous, and many moved on to another dream.

No matter how short or big the theme song. It will always remain a motivational song for kids. It makes the kids dream about their future at a young age.

The theme song from The Loud House is a piece of powerful pop music. As a kid, we all grooved to this energetic theme song. And some of us still like to listen to this song.

The music artist Doug Rockwell sang this theme song, making it memorable. Michaelle Lewis, Doug Rockwell,, and Chris Savino wrote the lyrics of “The Loud House” theme song, instilling the catchy lyrics in our minds forever. The music composer Jonathan Hylander did his spell over this iconic song.

The cartoon show The Loud House plays the theme song before every episode. The iconic music of “The Loud House” got recorded by playing the F-sharp or G-flat keys.

MUST READ| Where Is Rosalie Bolin Today?

Who can ever forget 6Teen? 6Teen for kids is like FRIENDS for adults. It also has six friends in the cartoon show. As a kid, it makes you aspire to grow up, get a job and become independent.

Phil Naro wrote the lyrics and recorded the theme song. Initially, the show was titled “The Mall”. And the lyrics were different from what we heard. Later, the show’s title got changed. Phil Naro made changes to the theme song lyrics of 6Teen accordingly.

The 6Teen theme song gets played at the beginning of every 6Teen episode. It is a refreshing song. If you have not heard this theme song, you must.

The tune and lyrics fit so easily. It makes the theme song catchy. Dennis C. Brown and Chuck Lorre deserve all the appreciation for this creation. Not just the theme song, the entire album is full of masterpieces. The team worked hard on it.

As a kid, we all loved the cartoon show Teen Titans. The “Teen Titans” theme song of the pop genre was energetic. It was fun grooving to the Teen Titans theme song.

Puffy AmiYumi and Andy Sturmer composed the theme song together that we all cherish today. In the animated cartoon show, the theme song plays for only one minute and one second. The full version of the song runs for three minutes and seven seconds.

Brad Beck composed and performed this iconic theme song. “I’m From Another Dimension” theme song got played at the beginning of every episode. The background music in the intros of the cartoon show got generated by a LinnDrum.

The theme song has developed its fanbase over time. It is a fun song. You must listen to the “I’m From Another Dimension” theme song if you have not yet.

William Hanna, Hoyt Curtin, and Joseph Barbera composed the music together for this American cartoon show. The song became iconic in very little time. Although the show is old, the theme song feels fresh every time you listen.

The cartoon show Johnny Test is one of the favorite Tv cartoon shows for many individuals. The show had a different theme song in the first season. In the second season of Johnny Test, a new theme song got introduced.

This theme song became iconic. It took Johnny Test to a new level of success. As the audience loved it, this second theme song got used till the last episode of the fourth season. The theme song begins with a countdown. As the countdown reaches zero, the title of the cartoon show blinks a few times.

This catchy theme song holds our childhood memories. If you have not heard this “Johnny Test: Theme Song 2” from Johnny Test cartoon show, you must.

Milo Murphy’s Law is one of the finest cartoons shows one can watch. The kid in the show is optimistic. And every kid must aspire to be an optimist.

The theme song is catchy and makes you feel like you are the hero of your story. If you ever feel sad, listen to the “It’s My World (And We’re All Living In It)” theme song. It is refreshing and motivating.

The show Hi Hi Puffy AmiYumi is an animated cartoon show. Its theme song, “Hi Hi”, deserves to be on this list, as it is one of the best cartoon theme songs of all time.

Puffy AmiYumi band sang this theme song. It got released on 16 November 2000 as a single. Later, it got used as the theme song for the animated cartoon show Hi Hi Puffy AmiYumi. The theme song gets played at the beginning of every episode.

The theme song also has an instrumental version, which plays for the credits. If you never heard this theme song, you must. It is one of the best of all time.

A corrupted version of the theme song gets played for “Weirdmageddon” episodes. The original theme song is available for the audience on iTunes.

The theme song got recorded in Toronto at RCA Studios. It is unlikely that you have not heard the Spiderman theme song. But if so, you must listen to this iconic theme song.

Who can forget G. I. Joe? The cartoon show G. I. Joe is one of the favorite cartoon shows of all time. Every kid loved this cartoon show. It 100% deserves to be on the list of 25 best cartoon theme songs.

The theme song gets played at the beginning of every episode of G. I. Joe. In the second season of G. I. Joe, some changes got made to the theme song. Some even say that it was a tactical mistake.

The theme song is energetic and catchy. If you never heard it, you must. It is one of a kind and refreshing.

The theme song is iconic and will always remain iconic. You must listen to this song if you have not.

The cartoon show Transformers entertained the children. Kids have showered this show with their love for generations. With that said, we can not forget its classic theme song.

Ford Kinder and Anne Bryant gave the iconic tune to the Transformers cartoon show. And this tune has stayed in the hearts and minds of the audience ever since. They used simple repetition of the Transformer’s rhyming slogans.

Who knew this could get so catchy? The theme song is brilliant. I am sure you must have heard it. If not, you can enjoy the theme song now.

The cartoon show Captain Planet And The Planeteers is an American animated environmentalist superhero Tv cartoon show. It teaches good values to the children.