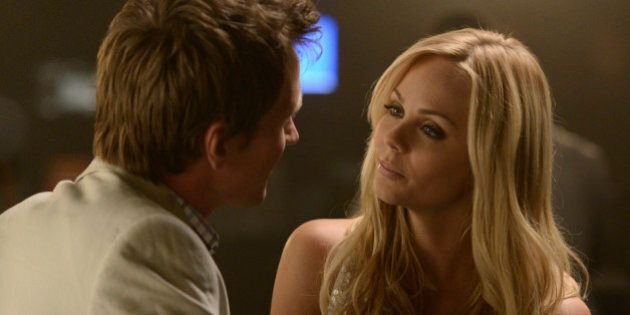 If you like to watch Bitten, then here we are with lists of 8 series which are related to the plot and genres of Bitten. Let’s see some series like Bitten

True Blood is an American television series that is a perfect mix of horror, fantasy with lots of drama. The Series has a total of 7 seasons with 80 episodes. The running time of each episode is 45–60 minutes. The series premiered on September 7, 2008, till August 24, 2014, on HBO. True Blood is based on The Southern Vampire Mysteries, written by Charlaine Harris. The series starts with stars Anna Paquin, Stephen Moyer, Alexander Skarsgård, Sam Trammell, Ryan Kwanten, Rutina Wesley, Chris Bauer, Nelsan Ellis, Jim Parrack, Carrie Preston, Michael Raymond-James, William Sanderson, Lynn Collins, Lois Smith, Adina Porter, Lizzy Caplan, Stephen Root, and Mehcad Brooks. The plot of the series starts with a telepathic waitress, named Sookie Stackhouse. She lives in Bon Temps, Louisiana, a fictional rural town. After the invention of synthetic blood, which let the vampires come out of their coffins. Sookie, somehow she fell in love with a vampire. What are you waiting for, you should watch it right away. You can watch True Blood on HBO, and it is also available on Amazon.

A Canadian television drama series Killjoys. This series is a perfect balance of Science fiction, Drama, and Adventure. The series is created by Michelle Lovretta. The running time of each episode is 42 minutes. With 5 seasons, it has a total of 50 episodes. The series runs from June 19, 2015, till September 20, 2019, on Space and CTV Sci-Fi Channel. The series starts with Hannah John-Kamen, Aaron Ashmore, and Luke Macfarlane. The series starts with a trio Dutch, John, and D’avin. The trio work for the Reclamation Apprehension Coalition (RAC). These hard-living hunters work in the Quad  (4- planets and moon). With their jobs, they have to be on their word that they should remain neutral in the conflict. The trios are working hard to keep their lives and friends alive at any cost. This is one of the recommended series. And you should watch it once. The main attention goes into world-building and especially into character development. If you can watch it on Amazon Prime Video. This series has already attracted a bunch of people from all around the sphere.

An American television series Vampire Diaries, it’s most  recommended series because of its amazing and perfect balance of Drama, Supernatural Horror and Fantasy. This series is based on a young adult novel, written by L. J. Smith. Kevin Williamson and Julie Plec are the developers of the series.

Series stars are Nina Dobrev, Paul Wesley, Ian Somerhalder, Steven R. McQueen, Sara Canning, Kat Graham, Zach Roerig, Kayla Ewell, Joseph Morgan, Michael Malarkey, Michael Trevino, Matt Davis, and Candice King. With eight seasons and 171 episodes. The original runs of the series is from September 10, 2009, till March 10, 2017, on the network The CW. Season 1 to 7 has a total of 22 episodes whereas season 8 has 16 episodes. It got quite a good response from critics and deserving ratings too. As we know that not everyone could watch it on The CW, so it’s available on various sources of interest. Yes! It’s already available on Netflix and Amazon Prime Video. Go watch it! You are definitely going to love it.

An American fantasy television series Supernatural. It is loved by the audiences because of its genres Action, Adventure, Drama, Fantasy, Horror, and Mystery. Eric Kripke is the creator of the series. The running time of the series is 38–45 minutes. 327 episodes combined in 15 seasons. The show first premiered on September 13, 2005, and ran till November 19, 2020, on The WB (2005–2006) and The CW (2006–2020). The series starts with the actors Jared Padalecki, Jensen Ackles, Katie Cassidy Lauren Cohan, Misha Collins, Mark A. Sheppard, Mark Pellegrino and Alexander Calvert. The production of the series was done in Vancouver, British Columbia. The list of the shows related to Bitten is incomplete without having this series supernatural. The series follows the storyline of Sam and Dean Winchester, who travel across the world hunting supernatural beings, with the help of their friends. Along their way, they found some other hunters. In case you haven’t watched it yet, it’s now available on the internet like Amazon Prime Video, discovery+, Disney+, Apple TV and also on other sources but via subscription. Go watch it right away, you are definitely going to love it.

READ MORE | 10 Movies Like Imitation Games That You Must Watch!

A Canadian series blood ties, first premiered on March 11, 2007, on City (Canada), Space (Canada), and Lifetime Television (United States). A perfect blend of comedy-drama and horror made the series a must-watch. The series is adapted from the book Blood Books, written by Tanya Huff. The production of the series was set up in Toronto, Ontario, and also in Vancouver, British Columbia.

The series starts with actors Christina Cox, Kyle Schmid, Dylan Neal, and Gina Holden. This series has only two seasons. Season one of the series has 12 episodes whereas reason has only 10 episodes. This amazing series not only premiered in Canada, but also in different countries like the United Kingdom, Australia, in Latin America and also in some different countries. The two seasons series concluded on December 7, 2007. The running time of each episode is roughly 43 minutes. If this series is not in your watchlist, then you are missing a very big thing. You can watch Blood Ties on Netflix, Amazon Prime Video, and Hayu as well.

An English series The order, is based on genres Supernatural powers horror and drama. The series is created by Dennis Heaton. The first of The Order premiered on March 7, 2019. It’s an original series on Netflix. The series has only two seasons, with 10 episodes in each season. The running time of each episode is around 50 minutes. This series has already got a 100% rating from Rotten Tomatoes, and good reviews from the audiences as well. The story is quite interesting because you want to know what is going to happen next. Magic, secret orders, and evil forces make up a fertile ground for adventure. However, season one of the series gained a lot of positive reviews from the audience after its release. After season 2 concluded, in November 2020 further seasons were canceled. The series stars Jake Manley, Sarah Grey, Matt Frewer, Katharine Isabelle, Max Martini and Louriza Tronco and there are some other supporting characters as well. The order is about college student Jack Morton, who wants to join the Hermetic Order of the Blue Rose. It’s a secret society that teaches about powers and magic. However, you can watch both the seasons of the series on Netflix.

A British television drama series Being Human is about Horror, Supernatural fiction, and Comedy-drama. The series was created by Toby Whithouse. This series has a total of five seasons with only 37 episodes. The beautiful productions of seasons one and second are set in Bristol, England while the production of seasons three, four, and five are set in Barry, Wales.

The running time of each episode is around 58 minutes. On 18 February 2008, the first season of the series premiered on BBC Three/BBC HD. This series is one of the most popular series on its original network. And it also got good reviews from the audience. The series stars Lenora Crichlow, Russell Tovey, Aidan Turner, Sinead Keenan, Michael Socha, Damien Molony, Kate Bracken and Steven Robertson. The plot of the series follows the life struggle with things like addiction, and does not fit in humanities, and making wrong and right choices. If you don’t want to miss something bigger than what is on BBC iPlayer…

An American television series The Originals put together with Horror, Fantasy, and Supernatural flawlessly. The series was created by Julie Plec. This series got average viewers of 2 million viewers. This series does not only get good viewers but also gets nominated for multiple awards and also won the award. The series also got an 80% rating from Rotten Tomatoes. It’s such an astonishing series that you can’t take your eyes off it. N series also got an 8.3/10 rating from IMDb. This series is kinda different from subsequent series. This is something you can’t miss if you love to watch Bitten. The series stars Joseph Morgan, Daniel Gillies, Claire Holt, Phoebe Tonkin, Charles Michael Davis, Daniella Pineda, Leah Pipes, Danielle Campbell, Yusuf Gatewood, Riley Voelkel, Danielle Rose Russell, and Steven Krueger. This series has 5 seasons with 92 episodes. The series runs from October 3, 2013, till

August 1, 2018, on The CW network. However, now you can watch it on Netflix and Amazon Prime Video as well. Go ahead and watch it. You are going to love all the series.

READ MORE | Who Is Avery In Yellowstone? Everything We Know