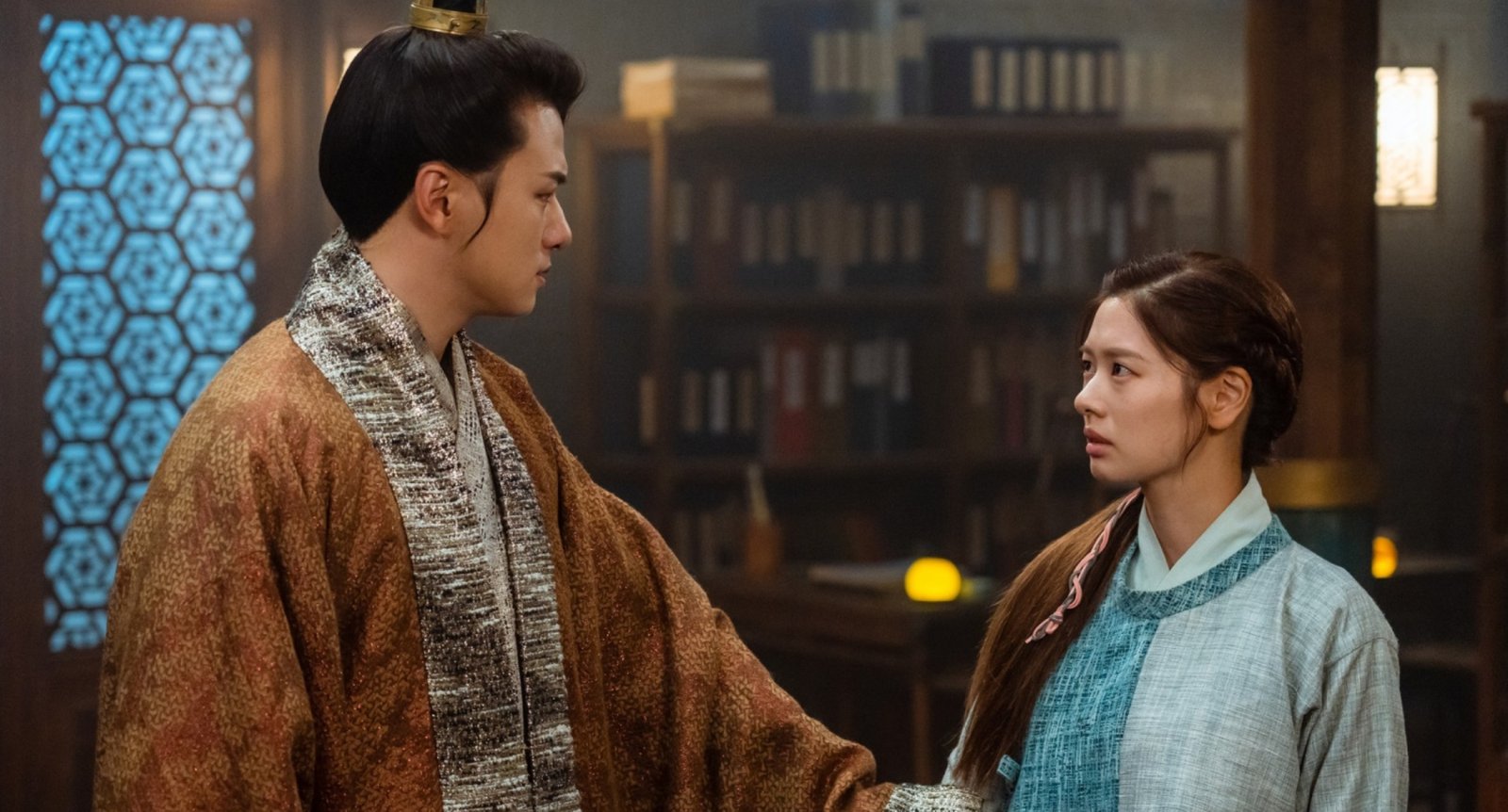 We all know the craze for k-dramas right now is no joke, most people are into Korean dramas nowadays and their popularity is on another level, Alchemy Of Souls is also witnessing the same thing, I can say that you have already recognised this drama name, Alchemy Of Souls is currently an ongoing K-drama that is being aired on TVN, this beautiful drama is written by the most popular writer duo, The Hong Sisters, as we know that their dramas never disappoint us such as A Korean Odyssey, Hotel Del Luna and many more masterpieces are there which are written by them and Alchemy Of Souls is one of them.

This drama got aired on June 18, 2022, and as of now only 18 episodes have been released, this is really breaking the hearts of the fans as we are down to the last week of Alchemy Of Souls, we are already on episode 18 and this Saturday and Sunday the last two episodes will be released, marking the end of the first part, it is confirmed that the second season will be aired this December, fans are very excited to watch the second season but they are sad at the same time because their favourite character Mudeok, which is played by Jung Somin will not be there in the second part, it is confirmed that Jung Somin is not going to be a part of the second season, fans are very disappointed to hear this but we will know the reason for Somin not being a part of the second season only after watching the last episode of the first season.

As I have mentioned above, only 18 episodes are out and the eighteenth episode got released last week, so many fans are there who are not watching this amazing drama right now as they are waiting for it to be over so that they can binge it, but it is very hard to wait for the next episode and it is really hard not to watch the latest episode of Alchemy of Souls, so fans are trying to see the spoilers on the Internet and many social networking sites.

If you are someone who badly wants to watch Alchemy Of Souls but trying to control yourself so that you can watch it later then you have come to the perfect place to see the spoilers, episode 18 got released on 21st August 2022, it also scored the highest record, making the drama one of the most popular ones, so those who have not seen episode 18 are now curious to know about it. Are you curious to know about episode 18? Are you ready to know the biggest spoiler and highlight of episode 18? Then keep reading this article and get to know every detail of information of episode 18.

Episode 18 of Alchemy Of Souls achieved a 9.3 per cent rating, we can expect that the next episode will achieve double ratings, as this drama is so good but if you are curious to know why this episode gained this high rating then let me explain the whole plot of episode 18. Are you curious to know? Are you excited about the spoilers? The ending of episode 17 shows us that Jin Ho Gyeong shows the existence of the Ice Stone at the assembly meeting so that the other powerful mages will be against Songrim and they will forbid them to take care of the things related to sorcery but obviously Jin Ho-Gyeong didn’t do all these according to her own wish, she did all these because Jin Mu told her as he brought back her lost daughter, Jin Buyeon but she is actually not the real Buyeon, she is the swindler So-I, so the other mages started pointing their fingers against Songrim, and started Fighting over the Ice Stone then the King said that they should witness the power of Ice stone and then make the judgements so he ordered Jin Ho Gyeong to kill Mudeok and then bring her back to life and at the end of episode 17 Mudeok fainted and Buyeon recognised her mother and she wakes up at the perfect time when Jin Ho Gyeong was strangling her and Buyeon said “Mother”, that’s how episode 17 got ended with a cliffhanger and fans totally lost it they waited a lot for episode 18 and now I will tell you every little details of episode 18.

At the beginning of episode 18, it shows how mudeok fainted while Jin Ho Gyeong Strangled her and then Buyeon woke up and said “Mother” while looking at Jin Ho Gyeong at that moment she stopped strangling her and the Ice Stone automatically started moving toward Mudeok and Jin Ho Gyeong was in shocked and we can say that lowkey she recognised that Mudeok is the real Jin Buyeon. When the Ice Stone started acting up, Jin Mu thought that the Queen is controlling it but he became shocked when he got to know that the Queen is not the one who is controlling the Ice Stone, it is actually Mudeok or we can say Buyeon but the fake Buyeon, who is So-I took the Sword and tried to break the ice stone but she got stuck in the ice stone and Mudeok and So-I both were taken by the Ice Stone to Jeongjingak, and fortunately, the crown prince, Seo Yul, Jang Uk and other mages were also there, they found it eerie when the saw fog all around Jeongjingak later they found out that the Ice Stone has made a Barrier around Jeongjingak which is blocking their energy and if they will try any spell then the Ice Stone will absorb their energy and it will make them weak.

Jang Uk finds it weird when he sees Mudeok there because Mudeok was actually in the assembly but Mudeok lies and said that she was there from the very beginning and she followed Jang Uk but what is the most interesting thing about this episode is that finally, Naksu regained her powers and she tries to say it to Jang Uk but could not say it, then another problem arises when they find out that the soul shifter, Master Kang was being treated at Sejukwon wakes up and started feeding on other mages energy and he disappears from Sejukwon and tries to hide in Jeongjingak, the mages, Jang Uk, Seo Yul and the Crown Prince could not use their energy or cast any spell as the Ice Stone will absorb their energy and it will weak their body and it can also destroy their powers but Master Kang still can use his power as he is a Soul Shifter.

Master Kang tries to feed on So-I’s energy but she says that she is a part of Jin Mu’s team so he should show mercy on her and then she says that she will bring the other powerful mages that are stuck in Jeongjingak and he can feed on their energy but when he asks about Seo Yul, So-I says that he is not there, she lied about it because it is clear that she likes him and doesn’t want him to suffer. So, So-I tries to bring the other mages of Songrim so that Master Kang can feed on their energy and then she targets Mudeok and tells her to go to the room and bring her a blanket but fate takes an unexpected turn because Seo Yul offers his help to Mudeok and he went to the room instead of Mudeok, when So-I gets to know about this she tries to save Seo Yul but it was very late because Master Kang already saw Seo Yul and he started attacking him.

He easily defeats Seo Yul as Seo Yul can not use his energy because of the Ice Stone but Master Kang can use his powers as he is a soul shifter now, but the other mages and Heo Yun Ok entered at the perfect time and saved Seo Yul, then Jang Uk gets worried about Mudeok as she is nowhere to be found then soon he figures out that Mudeok/ Naksu actually has regained her powers and she is the only who can kill Master Kang, Do you know why? Because we all know that Mudeok is actually Naksu and she is a soul shifter, so Jang Uk uses his brain and sets a trap for both Mudeok and Master Kang.

Cha Beom comes to Mudeok and says her that Jang Uk has set a trap for Master Kang and he has used himself as bait, he will try to lure him to the secret room and trap him there, after listening to the words of Cha Beom, Mudeok gets worried about Jang Uk and she takes her sword and runs to the Secret room, she sees blood there and started thinking about the words of the Crown Prince, do you know what did the Crown Prince said to Mudeok? He says that if she will see the gate of the secret room closed then Jang Uk is already dead and if it is open then Jang Uk’s plan has successfully failed.

So Mudeok gets anxious and she opened the gate of the secret room then she saw Master kang standing alone, Mudeok unsheathe her Sword and uses Tansu then stroke her sword on Master Kang, she successfully killed Master Kang but she broke into tears as she thought that Jang Uk is no more but Jang Uk came and Mudeok said “So You are alive My Pupil”, Jang Uk asked her why she didn’t s that she has regained her power and now that she has regained her power she should point her sword at Jang Uk first as she has promised to him, and Mudeok kept her promise but she didn’t kill him and asked him what is the second choice that he said, he would make, Jang Uk holds Mudeok and Kissed her, the whole scene was very beautiful and fans really enjoyed the whole episode especially the last scene, but they are now afraid to see the last two episodes of Alchemy Of Souls because it is confirmed that Jung Somin will not be a part of the second season so what kind of twists and turns will happen in the last episode?

Will the writer disappoint us? Fans are already disappointed because Somin will not be there so they do not want a sad ending, let’s hope to witness a happy ending because all the characters are too good that they deserve a happy ending and the viewers are also worried as Seo Yul got hurt in episode 18 and they do not want his injuries to become more serious in episode 19.

The whole episode is so good, the scenes, everything is so perfect about this episode, and in between serious scenes, this drama never fails to deliver us some comedy scenes that will make us laugh a lot, we can that Alchemy Of Souls is indeed a whole package, it makes us laugh, it makes us smile, the osts are blessing our ears, the cinematography is aesthetically pleasing to our eyes and what else should I say? Every episode has the best ending which tempts the fans to watch the next episode as soon as possible.

The above lines are the detailed explanation of episode 18, after reading this you much be dying to watch episode 18, you should watch it because it’s worth watching, and this episode will not disappoint. There must be many questions going on your mind about Buyeon and his mother, Naksu, the Ice Stone and many more things but as of now, we can say that Jin Ho Gyeong has recognised that Mudeok is the real Jin Buyeon and the other secrets will reveal in episode 19 and 20. If you want to be updated on your favourite k-drama, Alchemy Of Souls then stay connected to our page, we will deliver you the best articles and factual information regarding Alchemy Of Souls.