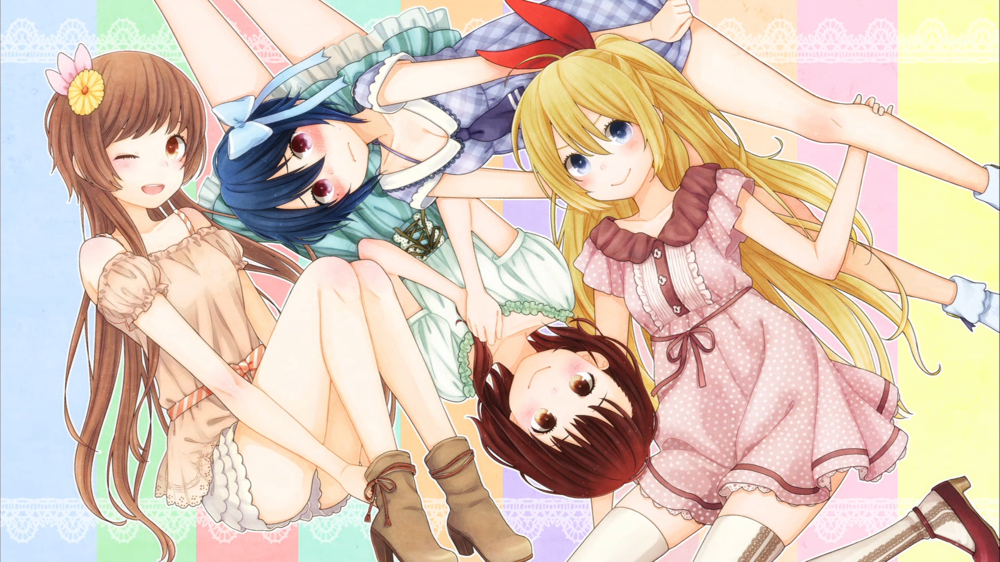 Konnichiwa Minna san! How have you been? Watching anime and reading manga as always! I am at least! This year we have much new anime coming right over. Do have a gala time while you stream the shows.

Citrus! Again sure brings back a lot of memories. Not long ago I shared updates about this one. But today my article has new content. That will help you fall in love with anime mootoo, mootoo! Tadashī?

Today, I am going to share with you the anime which are quite like Citrus. If you haven’t yet watched the anime, then go and watch it now. And if you have watched it and enjoyed it, and have huge expectations. Then you logged inside the right page, keep reading as you get to know more animes like this one. First let me introduce you to the anime, for those who haven’t watched it yet. Then, I will move in with the follow-up list for you to watch and enjoy.

So, what are you waiting for, actually that you should be telling me? Anyways, let’s start!!!

A small warning: Spoilers Ahead!

The anime’s major theme is Girl’s Love (GL). If you are into lesbian love then, this one is perfect for you. If you also aren’t then also give this sweet anime a watch. I am optimistic you will fall in love with the story as well as the characters. The anime received a rating of 6.48 by My Anime List (MAL). The show runs for 23 mins each with 12 episodes.

Yuzu Aihara is quite a fun-loving girl who enjoys her life shopping and spending time with boys. But suddenly her carefree life comes to an end when her mother remarries and they move into her step-father’s house. To add to her distress further she is admitted to an all-girls school and she gets into a row on her very first day with the famous student council president.

Later she learns Aihara is actually her step-sister and together they will live in the same house. What will happen, will they continue their quarrels and bickering or will this start a new romance between the two?  And what will happen when Mei suddenly kisses Yuzu will sparks fly or this is an announcement of another strife?

Watch the GL romantic drama adapted from a manga now! If you loved it or will fall in love with it, then do stream the next 10.

Also known as Kuzu no Honkai, the anime adapted from the manga made its debut back in 2017. Rated 6.8 by IMDb and 7.21 by MAL, the anime runs for 22 mins each with 12 episodes. The drama, romance with a little Eiichi will blow your mind with its amazing storyline and the character’s emotion and life happenings.

This is indeed a very sad romantic story. Two couples are together, but they are actually not. What? How? Let me explain. Hanabi and Mugi are considered the best perfect pair to everyone around but actually, each loves someone with whom they can’t be together. What will happen when their lovers fall in love with each other to their dismay, will they break their false relationship for the sake of their lovers, and what will happen next?

Also known by the name Candy Boy, this is an ONA with only 7 episodes runtime being 14 mins each. A sequel and prequel to this anime are also available. The anime received a rating of 6.81 from IMDb and 5.7 from IMDb.

Yukino and Kanade are twin sisters living fun-loving life under the same roof. Things are fine and hearty, being lovey-dovey to each other and going on dates. But suddenly, one day Kande finds Yukino with another girl. Will this caused jealousy strife or their relationship will fall apart or will this start a romantic love triangle? Will Sakyuás obsessive love help the sisters realize their own feelings for the other?  Do give this one watch!

This winter anime is also known as Domestic Girlfriend. Rated 6.71 by MAL and 6.8 by IMDb, how can I not mention this one. This one most definitely deserves a place in your watchlist as well as in your heart. The story and the emotion will definitely stir something in the heart.

Adapted from once again a manga the anime runtime is 25 mins and the total number of episodes is 12. How do you feel about unrequited love frustration and cluelessness about love! Then this one is a perfect watch for you. Now let me give you a short brief of the story.

Natsuo is in love with his school teacher Hina but is unable to confess. Frustrated with his unrequited love he attends a mixer and there he meets Rui. Rui is an inexperienced girl who is often made fun of by her friends. Both the inexperienced pair decide to have sex in Rui’s house and then move along their own separate paths. But things don’t go as planned as fate has something else stored for them.

Natsuo’s father suddenly announces that he has married a woman with two daughters. And they are none other than the girl for whom he has the desire and the other with whom he had a fling. What will happen now? Which sister will Natsuo end up with? Will things get complicated? Or will this start another love triangle?

Adapted from the manga as well, the anime runs for 12 episodes with runtime being 22 mins each. Meet Hakura and Yuu, two best friends attending the same high school. Meeting new friends, gaining new experiences. But things don’t go as they planned due to some incidents and the follow-ups, their time in high school is now limited.

Now with the hope of creating new and many memories, Hakura decides to stick with Yuu. But when Yuu shares a passionate and affectionate kiss with her in an empty classroom the air around changes. Watch this sweet anime available online.

Adapted from the manga of the same name, the anime is also known by the name of Maria Watches Over Us. I simply cannot ignore this one. Although the anime aired a long time back, it’s a pretty famous one. The anime has 2 seasons with each having 13 episodes respectively. The runtime of both seasons is 24 mins. The anime also has a special episode with 7 episodes. Go and watch the anime now. MAL rated 7.31 and IMDb rated it 6.3. Now, let’s discuss the plot.

Yumi, a high school girl, enters a catholic all-girls school, the Lillian Girls’ Academy. There she catches the eyes of a beautiful girl to her surprise. Sachiko is a famous student and admired by many; she tells Yumi to be her sister and guide her through the campus. Now gossip and rumor start about the two as they are seen together often. What happens next, don’t miss folks!

Like all the other anime this one too is adapted from the manga. The anime is pretty huge but believe me it’s worth watching. Once you start watching you will be glued to the screen and who knows this one might have a place in your binge-watchers list. With 47 episodes the runtime of each episode is 23 mins. MAL has rated it with an 8.50 and IMDb with an 8.4.

Nana Komatsu is a naïve girl who easily gets attached to those around her. Although with a dream of answering her true calling, she chases her boyfriend to Tokyo. Whereas Nana Osaki is a punk Rockstar who is a vocalist to a band. She too chases a dream of putting her career in a band. Both Nanas travel to Tokyo on the same bus.

As a certain chain of events follows and with the confusion of names the duo ends up sharing the same apartment. Now in the same household slowly their friendship deepens through love, heartbreak, music, day-to-day challenges, and many more.

The anime is also known by the name of YuruYuri: Happy Go Lily. This one has 2 seasons with 12 episodes and runtime being 23 mins each respectively. 1 special OVA is also there. Rated 7.58 by MAL the anime scored a rating of 7.5 from IMDb. The genre of the anime is a slice of life, comedy, romance, and GL.

The comedy-drama states the life of Akaza and her childhood friends in the clubroom. The anime follows the daily life of the Amazement club with Akaza’s classmates.

Available for one season the TV series has 26 episodes with run time being 25 mins each. MAL rated the anime a 7.29 and IMDb 6.9. The school love drama will lift you off the ground with its love and affection.

Aoi joins an all-girls catholic school as a transfer student, the strawberry dorms. Soon she finds out that the three sections are headed by a president. The uniform and the activities involved for each are different from the other. Due to a series of incidents and events that follows, Aoi meets the student idol Hanazono. Both eventually fall for each other. But the romance doesn’t go without challenges, as a love triangle is now seen. With challenges, and overgrowing love and affection how will the story mold? Adapted from a manga and a light novel the anime will surely cuddle you with sweet romance.

Audiences often compare this anime with Horimiya, such as the heart-touching romance that wins the heart of all. With heart touching story and great character development, IMDb rated it 7.2 and MAL, 7.12. The drama is available for 12 episodes with 24 mins runtime.

Sakura and Hougetsu are two friends who slowly develop feelings for each other and learn about the other with the passage of time. As the relationship no longer remains platonic the two must realize how their feelings will end. Will their ardent love tear them apart or will it help them come closer than ever before?

Last on today’s list is this one, also called Kämpfer. This one is very interesting to watch. Fantasy, romance, eechi, action, GL, and romance all falls under this. Make sure to add this to your watchlist.

The story revolves around a blue-haired guy who suddenly wakes up to find himself transformed into a girl. Now with the gender transformation, a stuffed tiger informed him that he is now the chosen one. Now as one of the Kamfer he is destined to fight with the other girl fighters. What will happen now? And is there more trouble in his way as he gets attacked by another Kamfer?

Rated 6.40 by MAL and 6.1 by IMDb the anime has a total number of 12 episodes and 3 special episodes as well. The season runtime is 24 mins per episode.

Now, I have kept my promise and shared the list of anime like Citrus. Now you can go and watch it. The main question that comes after this is, where to watch? Why worry! I am here to take it away!

All the anime is available online with completed seasons premier as well. You can watch it in any of the OTT’s. Go and stream it on Crunchyroll, Gogoanime Netflix, or even on Amazon Prime Videos.

So, guys now I will take your leave. Will meet soon, again with new crazy updates.