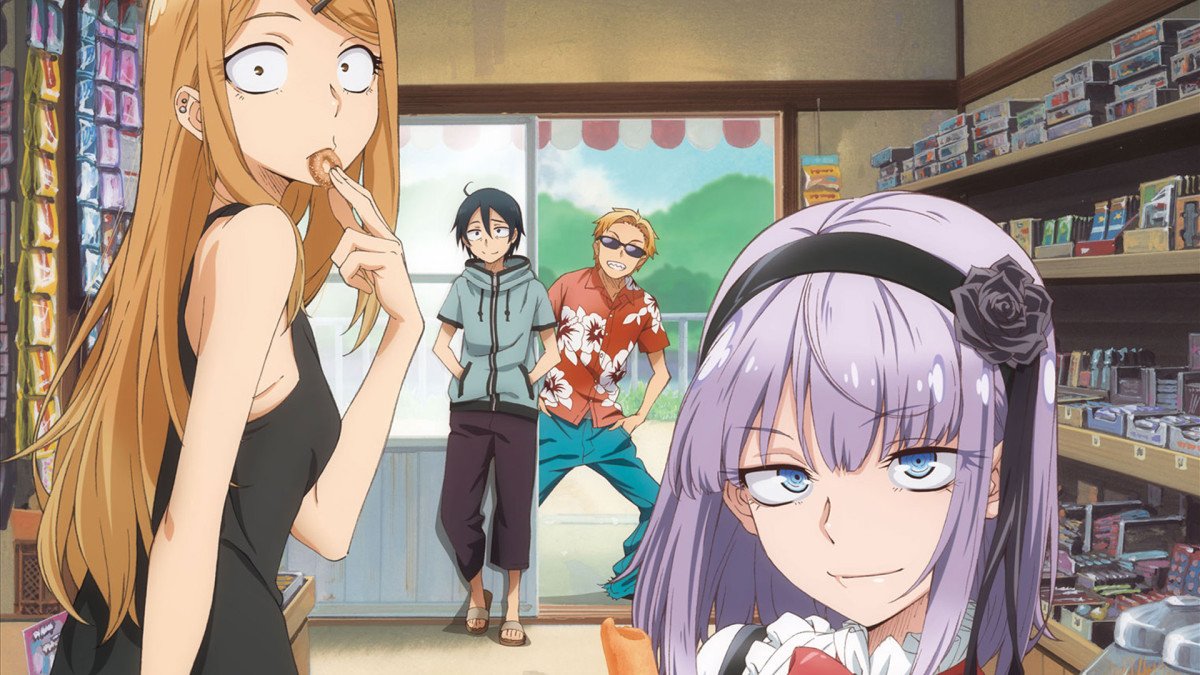 Yukihira Souma is a young man who works in a family restaurant with his father. His father enrolls him in Japan’s premier culinary school, Tootsuki private school when they decide to divorce one day. When the new students are introduced, he surprises everyone by challenging his own classmates, proclaiming that he will be the greatest in the academy. The plot becomes increasingly intricate from there, with additional persons appearing to either assist or make Souma’s life untenable. Will he be able to fulfill his ambition of being the best cook in the world?

If you like Food Wars! Shokugeki no Soma, we’ve put together a list of the best similar anime with cooking or food-related plots and characters who grow and develop over time.

Ryou, a high school student who lives alone, is the protagonist of the novel. She enjoys cooking, but no matter how hard she tries, her meals never taste as good as they appear. That changes when Kirin starts sleeping over at her house every weekend. Along with Shiina, they build a friendship over food, and all three of them have a peculiar yet sexual eating style.

Ryou learns to realize why her food doesn’t taste well as she develops in the kitchen. The word “koufuku” in the title is a play on two homonyms, one of which indicates appetite and the other happiness in Japanese. Fans of the genre will like this simple, friendly cartoon about food.

The world in this novel is mostly ruled by food and the pleasures it provides; as a result, an institution called the IGO was established (international gourmet organization). They’re in charge of getting these dishes to the public, so they hire “gourmet hunters” to go out and find the most exquisite ingredients, which are also the most difficult to obtain.

Toriko is a gourmet hunter whose ambition is to finish his “full menu,” which functions as a sort of CV that displays both the food he has acquired and the most delectable. Komatsu, his companion, aspires to be the best chef in the world by cooking whatever Toriko brings him. Things become more complicated due to the existence of another group known as the “Bishokukai,” whose goal is diametrically opposed to that of the IGO: obtain ingredients for their own use solely, and thereby build a gourmet empire. In some ways, this anime, like Shokugeki no Soma (Food Wars! ), takes things to a new level, and it’s a lot of fun to watch.

In pursuit of her mother, Nicoletta arrives at Casetta dell’orso. She was put in the care of her grandparents at the age of six by her mother because she couldn’t marry the guy she loved if he learned she had a daughter.

So, at the age of 21, she goes there determined to tell her mother’s new husband everything, but while there, she changes her mind after falling in love with the food and, eventually, with the staff. A romantic comedy about a foodie’s love for food.

Mao decided to travel around China to learn more about making unusual meals after clearing the Guangzhou Special Chef Trials. When he returns, he’ll find out that the real fight has only just begun. He has already been targeted by the Underground Cooking Society.

Mao and his pals must embark on a quest to fight the Underground Cooking Society in order to fulfill his mother’s desires. If you’re seeking anime that’s similar to Shokugeki no Soma, this show about cooking is a must-watch.

The story introduces us to You Satou, a poor student who, on an ordinary day, decides to eat a half-price bento and passes out while doing so.

He is discovered comatose in a hospital room the next day. He goes to school the next day without remembering what occurred and runs across a classmate he had met the day before his “accident.” He eventually discovers that at night, there are battles in all of the supermarkets to get the discounted Bentos. He also discovers that there are individuals known as “wolves” who battle for the Bentos.

Sen Yazuri, a wolf known as “The Ice Witch,” is the president of the “Half-Price Bento Lovers” club, which he pushes Sato to join and participate in the bento battles. Ben-To is an obvious choice when looking for more anime that is similar to Food Wars! because it is literally about a food war.

If you’re curious about the origins of FOODGASM in anime, go no further than Yakitate! Japan may be able to provide you with the answer! This presentation is the embodiment of the term “Foodgasm!” And by that, I meant that this show has the ability to make people drool incessantly, desiring to devour the cuisine offered (well, in this case, BREAD). This animation will show you heavenly bread-tasting, orgasmic eating sensations, and exaggerated after-taste expressions. Azuma Kazuma isn’t your typical youngster! He has a special ability known as the “Solar Hands.” His hands are warmer than normal humans because of this quirk. And now his bread-making prowess has reached a whole new level! Azuma didn’t care for bread at first. But, after learning about the glories of bread and the method of manufacturing it, he embarks on a quest to join “Pantasia” and create the fabled bread known as “Ja-Pan”!

READ MORE | Love, Life & Everything in Between Season 3 Release Date

Do you have a sweet tooth or enjoy munching on snacks? You certainly do, don’t you? Who, after all, doesn’t want to be a part of that? Snacks and sweets are everything to Dagashi Kashi! You should know the drill by now because it’s a show about munching and other such activities. Look into, investigate, and learn about dagashi (Japanese snacks) to the point where you’ll be craving them compulsively! Kokonotsu Shikada wants to be a manga artist, but his father wants him to run the Shikada Dagashi snack shop instead. This, my friends, is when the squabble begins! Despite being extremely devoted and educated about the family business, Kokonotsu refuses to take it over. Until Hotaru Shidare, the oddball enters their lives! Hotaru has a mission: to persuade Kokonotsu’s father to join Shidare Corporation, a massive food corporation. Kokonotsu’s father has a brilliant idea: if Hotaru can persuade Kokonotsu to take over the Shikada Dagashi, he will grant her wish!

Do you understand what a patissier is? A patissier is a pastry chef specializing in the preparation of desserts, pastries, bread, and other baked foods. So now that you know what a patissier is, you should be able to understand Yume-iro Patissiere. Yes, it’s all about making and baking pastries and various desserts…all in the name of competition! Apart from devouring cakes, Ichigo Amano isn’t really good at anything. Her biggest passion is, of course, devouring cakes. She also has a gift for tasting, which she is unaware of. As a result, a well-known patissier named Henri Lucas discovers her. With this revelation, Ichigo gains a once-in-a-lifetime opportunity to enroll at the elite St. Marie Academy for Dessert Culinary Arts.

So, since we’ve been talking about food, let’s talk about what food was before it became food! Food is, as you may know, a product of agriculture and the procedures that surround it. And this is Gin no Saji’s central concept! It’s really about agriculture, farming, and life on a farm! Oh, and don’t forget about the food! Because when agriculture and farming exist, there is…FOOD! Yuugo Hachiken is a studious young man who chose to attend Ooezo Agricultural High School in order to escape his parents’ worry and anxiety. Unbeknownst to him, his decision will result in a major life change. He certainly underestimated agriculture and farming, as confident as he may be! What he thought was simple and stress-free turned out to be quite convoluted and difficult. So now he’s chosen to take things seriously. Whatever obstacles he may face, he will meet them head-on and with zeal! “Here goes nothing!” says the farmer.

Oh, and in case you’re wondering, there’s nothing in Kill la Kill about food. I put it here because it features flashy ecchi and excessive fanservice. And do you know what anime combines both of these elements? Shokugeki no Soma, indeed! In that sense, Kill la Kill and Shokugeki no Soma are very similar! It all began with the assassination of Ryuuko Matoi’s father! As a result, Ryuuko’s quest for vengeance begins! Things lead to Honnouji Academy, a school headed by the vicious student council president Satsuki Kiryuuin and her underlings, the Elite Four, with only the missing half of the “Scissor Blade” as a clue! Is the murderer, however, connected to the school? In order to discover the mystery, Ryuuko will have to fight! Ryuuko must battle Satsuki and the Elite Four with the Scissor Blade and the strange power-uniform known as Senketsu in order to learn the truth about her father’s death!

And now for something completely different! What was the purpose of putting Ansatsu Kyoushitsu (Assassination Classroom) here? That’s because there are certain parallels that I can perceive. This one doesn’t have a “food” theme, but it does have a “student struggle” theme. Similar to Shokugeki no Soma, the pupils here are engaged in a larger-than-life war to achieve a goal. In Shoukugeki no Soma, the goal is to graduate and become world-famous chefs, but in Ansatsu Kyoushitsu, the goal is to kill the teacher and save the world. Oh, and I almost forgot—Ansatsu Kyoushitsu is also incredibly fun and amusing!

Do you get a wonderful feeling whenever you eat delicious cuisine or at least observe someone eating? Not only will the food featured in Koufuku Graffiti make you feel wonderful, but the general “feel good” ambiance of the event will as well. After all, it’s a pleasant slice-of-life/food anime, so it’s something to look forward to!

MUST READ| How Many Quirks Does Deku Have?