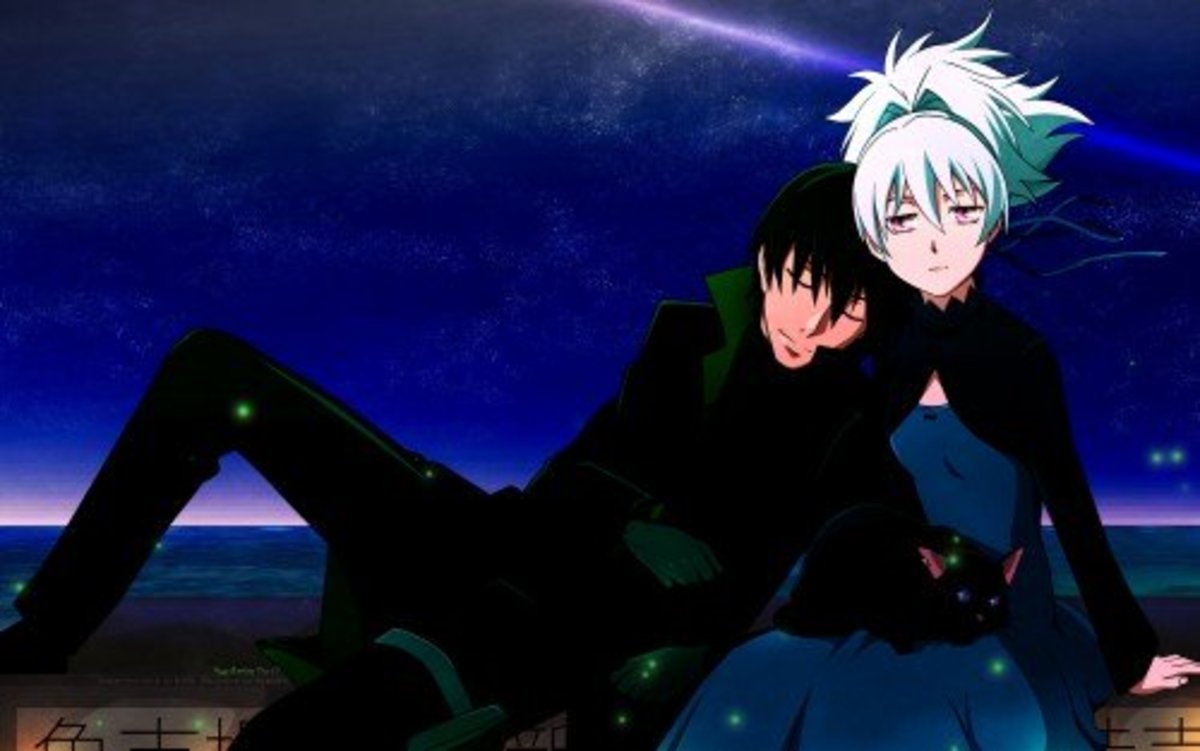 How have you been anime lovers? I hope everything is alright and you all must be having fun while watching anime right? Are you waiting for some recommended anime? If yes, then I have to say you have landed at the very right place. I am back with another article to recommend to you some anime that I’ve gathered. If you are into Guilty Crown, then keep scrolling. It’s not been a long time since I recommended you some anime, but I’m back with a bunch of banging anime to lift your mood. Being an anime lover, you must be aware of Guilty Crown, if not, no worries continue reading to learn something about Guilty Crown!

A Japanese anime series Guilty Crown, written by Hiroyuki Yoshino and Ichirō Ōkouchi. Under Production I.G Division 6, the series was broadcasted for anime lovers on October 13, 2011, on network Fuji TV and wound up on March 22, 2012. The Series was not only watched and loved by Japanese anime fans but for all non-Japanese anime lovers, under the license of the Funimation series was broadcast in North America. The storyline of Guilty Crown starts in  2039 and revolves around a boy named Shu Ouma. He acquired an ability called the “Power of the Kings” and this ability he can draw out weapons or tools from another person. It sounds fun, right? To know the whole story you should watch the anime.

Where to watch:- You can stream Guilty Crown on Netflix

Now you must have come to know all about Guilty Crown anime, if you liked its storyline and genres, then keep scrolling the article to know about series which are similar to Guilty Crown. Let’s go!

A Japanese anime series Future Diary adapted from a manga series of the same name, written by Katsuhiko Takayama. Viewers liked the series because of its great combination of action with a tinge of romance and even got a rating of 7.5 out of 10 by IMDb. The story follows a 14-year old named Yukiteru “Yuki” Amano, who is a shy and daydreaming loner. He is one of the game’s competitors and he only wants to survive. Another player named Yuno Gasai, who is a friend of Yuki and would do anything to be with him. What’s going to happen with them? You need to watch Future Diary to understand the whole storyline.

Where to watch:- You can watch Future Diary on Netflix.

Another anime adaptation from a manga series of the same name, written by Makoto Uezu. If you loved watching Guilty Crown, then you won’t regret watching Akame ga Kill! From the storyline to characters everything in this series is worth watching, and it will pull you from starting to the end. IMDb rated the series with 7.8 out of 10 while it got 7.5 out of 10 by MyAnimeList. The following follows a countryside boy named Tatsumi, with his two friends he goes to the country to make money for his village who is suffering from poverty. But there he meets a dangerous Assassins group Night Raid attacks, and their journey begins. The storyline sounds fun to watch right? To know his journey, watch the series.

Where to watch:- Crunchyroll.

A Japanese anime based on the manga series of the same name, directed by Masahiro Andō whereas Mari Okada has written the series. The series ran from October 5, 2012, along with 24 episodes, it’s finally wrapped up on March 29, 2013. IMDb rated the series 7.6 out of 10. The storyline of Zetsuen no Tempest follows the life of a teenage high school student named Mahiro Fuwa. Along with her parents, one year ago her younger step-sister named Aika was also mysteriously murdered. Mahiro is contacted by a leader of the Kusaribe clan named Hakaze Kusaribe. Mahiro decided to help Hakaze Kusaribe to find the real name behind the murder of her family members. Her journey begins from there. Try it out, you won’t regret watching it.

Where to watch:- Watch Zetsuen no Tempest on Crunchyroll.

A Japanese anime television series Black Bullet, written by Tatsuhiko Urahata. The series has just 13 episodes which premiered on April 8, 2014, and finally concluded on July 1, 2014. Black Bullet has already won the hearts of many anime fans from all over the world and despite reviews, the series got a rating of 7.1 out of 10 by MyAnimeList whereas IMDb rated the series with 6.9 out of 10. The storyline starts after ten years of the epidemic, a high school student named Rentarō Satomi. He is a promoter of the Tendō Civil Security Agency, with his Initiator he starts a mission to prevent the destruction of the Tokyo area. To know more about the story you need to watch it, as it is highly recommended.

Where to watch:- Black Bullet is streaming on Crunchyroll.

A Japanese anime series Deadman Wonderland, written by Yasuyuki Mutō. On April 17, 2011, the series premiered with 12 and an OVA and wound up on July 3, 2011. Once you start it, you will be stuck till the end, as it is highly addictive with its characters and storyline. IMDb rated the series with 7.2 out of 10. The series starts when Ganta Igarashi was sentenced to death for a sin he never committed. Then he was sent to a prison, where he found his childhood friend, and there he figures out that he is not like other prisoners but a Deadman who has a Branch of Sin. What is going to happen next? Do you want to know? Then watch the whole series.

Where to watch:- Watch Deadman Wonderland on Netflix.

With the list of anime series like Guilty Crown, there is another Japanese series Eureka Seven, written by Dai Satō. Under the production company Bones, the series premiered on April 17, 2005, ran for 50 episodes, and wrapped up on April 2, 2006. IMDb rated the series with 7.8 out of 10 while it got 8.1 out of 10 by MyAnimeList. The focus is on the life of a 14-year-old son of Adrock Thurston named Renton Thurston. He always dreams to join a renegade group Gekkostate, which is led by a legendary lifter named Holland Novak. Will his dream come true? To see his whole story, watch the series.

Where to watch:- Funimation.

Another banging anime series Tokyo Ghoul was written by Chūji Mikasano. On July 4, 2014, the series premiered under the production company Pierrot and after running for 12 episodes, finally concluded on September 19, 2014. The series got a rating of 7.8 out of 10. The series focuses on the life of a student named Ken Kaneki. He luckily survived after a deadly encounter with his date named Rize Kamishiro, who is a ghoul. After recovering he discovered that he transformed into a half-ghoul after surgery. What is going to happen that is a normal life? It sounds interesting, right? If yes, then watch it right away.

Where to watch:- Watch Tokyo Ghoul on Netflix.

A Japanese anime series C, written by Noboru Takagi. By Tatsunoko Production series released on April 15, 2011, along with 11 episodes and wrapped up in the same year on June 24. The series is set in Japan, and it was going through a financial crisis. The series follows a 19-year-old boy named Kimimaro Yoga, who is raised by his aunt, he only has a dream to live a stable life. But his normal life turns into something big when he meets a mysterious man named Masakaki, who offers Kimimaro some amount of money but he wants him to allow his future as collateral and Kimimaro accepts his money. Was it right to take that money? You must have such questions in your mind, right? If yes, then watch C to know.

Where to watch:-  Crunchyroll.

A Japanese anime series Darker than Black, written by Tensai Okamura and Shōtarō Suga. Under Bones, the series first premiered on April 6, 2007, along with 25 episodes it concluded on September 29, 2007. MyAnimeList rated the series with 8.1 out of 10 whereas it got 7.7 out of 10 by IMDb. The series follows Hei, who exploits the agents of his comrades of the Syndicate organization, their mission is to untangle the mysteries of Hell’s Gate. What’s going to happen? Will they untangle the mysteries? To know, You have to watch Darker than Black.

Where to watch:- Watch it on Amazon Prime Video.

10. Darling In The Franxx

A Japanese science fiction anime series Darling in the Franxx, written by Atsushi Nishigori and Naotaka Hayashi. Under the companies A-1 Pictures, CloverWorks, and Trigger, the series was released on January 13, 2018, along with 24 episodes it concluded in the same year on July 7. MyAnimeList rated the series with 7.2 out of 10 whereas it got 7.4 out of 10 by IMDb. The series is set in a dystopian post-apocalyptic future, where the civilization of humans has been abandoned. Parasites, Artificially-created children who are only educated for piloting Franxx in pairs. It sounds interesting, right? Then watch it right away, because with this amazing storyline you will have a package of laughter too.

Where to watch:- Watch Darling in the Franxx on Netflix.

I hope you had a great time reading this article. If you are still tangled up about whether to watch these series or not, I can assure you that you won’t regret watching them and all these anime are highly recommended. After watching do let us know your reviews about the series in the comment section. Until then stay connected with ThePoptimes for more such articles about your favorite shows!