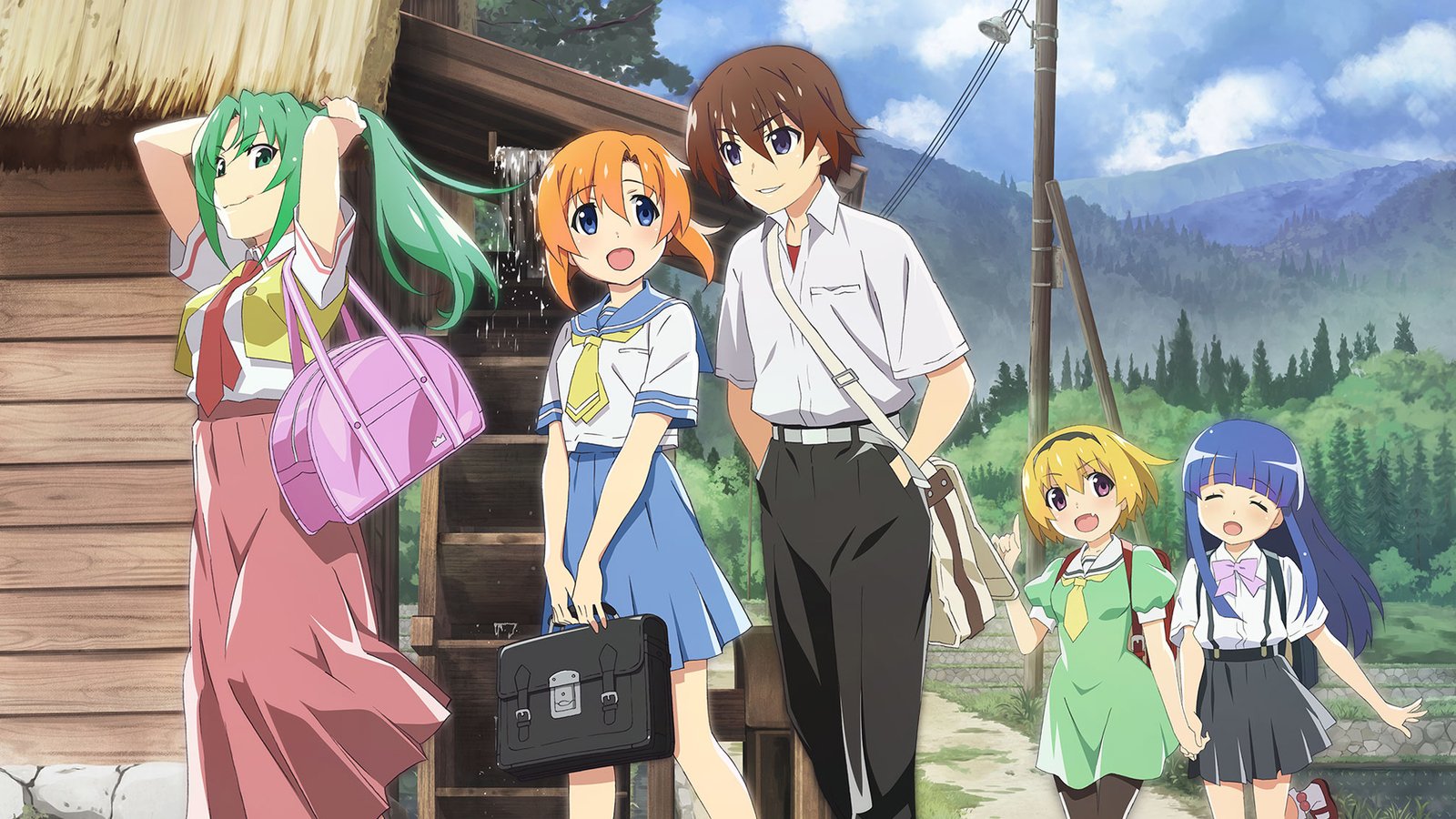 In Higurashi’s When They Cry, you should never judge a book by its cover. Higurashi: When They Cry appears to be a conventional slice-of-life anime about an attractive high school student, as far as I can tell. Those cute anime heroines have a lot more twisted, nasty, and tragically violent aspects than you might anticipate.

This is a 12-episode anime about Makoto Itou, a high school student who is in love with another student, Kotonoha Katsura. Because Makoto is too bashful to contact Kotonoha about going out, this is his phone background. Sekai Saionji is bothered by Makoto’s wallpaper. Instead of blackmailing him, she assists Makoto by befriending Kotonoha, allowing the two to become closer. Jealousy and deadly wrath develop from these two teenagers’ love and sex.

There is a horror anime in the spirit of Higurashi: When They Cry that deals with a cursed setting and includes some very awful deaths. Kouichi Sakakibara, a 15-year-old Yomiyama North student in class 3-3, is perplexed by the melancholy attitude that pervades the classroom.

A popular student from the same classroom 26 years before died strangely, and it looks that this is all connected in some way. Despite Kouichi’s warnings, Mei Misaki, a student who wears an eye patch, appears to have knowledge of what happened all those years ago.

Shiki is a Japanese ghost story set in 1994 in the little hamlet of Sotoba. A strange succession of fatalities has befallen Sotoba, and an intriguing new family has moved into Kanemasa’s long-vacant mansion on the surrounding hill. Megumi Shimizu, a young woman, pays a visit to the new family in Satoba with the idea of relocating to the city, but she never returns. Dr. Toshio Ozaki begins an investigation after her body is discovered in the jungle, revealing that her death was vampiric in origin.

If you like Higurashi: When They Cry, Death Note, and Battle Royale, I recommend The Future Diary. Yukiteru Amano, a high school outcast who keeps a diary, discovers that his cellphone has mysteriously converted into a Future Diary that can foresee the future for up to 90 days, and it’s up to him to use it wisely. When he awoke, he was greeted by two “imaginary” companions: Deus Ex Machina, God of Space and Time, and Muru Muru, his devoted aide. It’s a battle royale game in which Yukiteru must kill 11 other diary keepers like himself or die at their hands at the hands of the fictitious deities.

The appearance of School-Live attractive appearance! misleading. “All Hell Breaks Loose,” as Higurashi described it when they cry. During the first season, a cute slice-of-life show about four cute high school girls doing cute things morphs into an anime version of The Walking Dead. At Megurigaoka, four high school students named Yuki, Yuuri, Kurumi, and Miki are attempting to survive a zombie apocalypse.

Puella Magi, like School-Live! and Higurashi: When They Cry before it, follows in the footsteps of those two series. The magical girl anime genre is spun on its head in a wonderful but misleading way in Madoka Magica. When a mysterious cat-like creature known as Kyuubey offers them a once-in-a-lifetime opportunity, the lives of two middle school kids are permanently changed. Kyuubey will fulfill their every wish in exchange for becoming magical girls. According to Homura Akemi, a magical girl who appears in the anime, this dream come true is actually a nightmare masquerading as a dream.

If you are lactose intolerant, you should avoid anime: In the high school horror series Corpse Party: Tortured Souls, there are some genuinely terrible deaths. Mayu Suzumoto is graduating from Kisaragi Academy, and the story takes place at her farewell ceremony. The rite’s charms are linked to crimes committed at the now-demolished Heavenly Host Elementary School, where Kisaragi Academy now stands. Heavenly Host Elementary pupils have been whisked away to another realm to face their spiritual tormentors.

Unlike the majority of the options above, Hell Girl is a horror anthology series. However, it has the emotional ferocity of Higurashi: When They Cry. Anyone with a deep resentment toward another will be granted access to a supernatural website at 12 a.m. local time. Everyone whose name is entered into the website’s database will be sentenced to eternal agony. Ai Enma, the Hell Girl, will not hesitate to carry out the punishment. The Hell Girl, on the other hand, will demand that the person give up their afterlife and spend forever in Hell in exchange for the service.

Lil’ Slugger, a police nickname given to him because of his small stature and usage of a golden bat as an assault weapon, is terrorizing the citizens of Musashino City. The story revolves around an inquiry into Lil’ Slugger and his strange victims. It’s the best of both worlds both a crime drama and a horror anthology.

READ ALSO | Is Coyote Based On A True Story?

Akira Fudou, an empathetic but frail spirit, finds himself in the midst of a terrible universe in Devilman: Crybaby. After agreeing to assist his boyhood friend Ryou Asuka in his search for demons, Akira finds himself at an immoral party filled with death and devils. Akira joins forces with the devil Amon to become the Devilman in order to save his best friend’s life. Amon’s sheer strength and Akira’s damaged heart make an odd alliance.

Consider a childhood in which you were surrounded by all of your best friends, the beauty of nature, and your mother’s unconditional affection. Your orphan status does not deprive you of the love and care you deserve. The only requirements are that you submit to regular physical exams and don’t wander too deep into the forest at once. If you’re a decent kid, you’ll have a better chance of finding a loving family. In this world, there is deception. When Emma, Norman, and Ray learn of Isabella’s nefarious motive at Grace Field House, their worlds are destroyed. They must now figure out how to get out of this dilemma.

It’s best to go into this show with no idea what to anticipate. Simply press the play button to begin. Unlike When They Cry, Yakusoku no Neverland is a terrible encounter in which all expectations are repeatedly crushed. Even though Emma and Norman have already learned a lot about their mother and their house early in the episode, there are more surprises in store for them. It’s similar to When They Cry in that it combines horror, psychological thrillers, gore, and alternate universe elements in a fantasy world. Because of the adorable character designs and dreamy color palette, this reminds me of When They Cry. Now is the ideal time to catch up on this incredible series before it returns in 2021 for the premiere of its second season.

What is there not to love about Gakkougurashi? Unlike K-ON! and Yuru Camp, this is not your average after-school anime with cute girls doing fun things. We’ve been eager to tell you about it here at Honey’s Anime, but you’ll have to wait. Yuki Takeya, the adorable pink-haired girl, participates in a variety of activities as a member of the School Living Club. Taroumaru, their cute pet dog, joins Yuuri, Kaori, Miki, and Megumi in club activities in addition to Yuuri, Kaori, Miki, and Megumi. Are they, however, planning something much more sinister?

In the first episode, Gakkougurashi! reveals the truth. The memories of the key characters in When They Cry are distorted in the same way as Yuuki’s are. She goes through the motions every day to avoid confronting reality, greeting her professors and classmates, and searching for her lost dog. There is, however, a constant threat that the females must be aware of. They, too, must conceal the curse from Keiichi, but for different reasons than the female characters in When They Cry.

It’s a slap in the face to the protagonists’ awful realities in Gakkougurashi! and When They Cry. Similarly, the heinous past is portrayed through flashbacks in order to play with our minds. Make no mistake: don’t be deceived by the candy exterior.

MUST-READ | Which Is Better The Big Bang Theory or Friends?