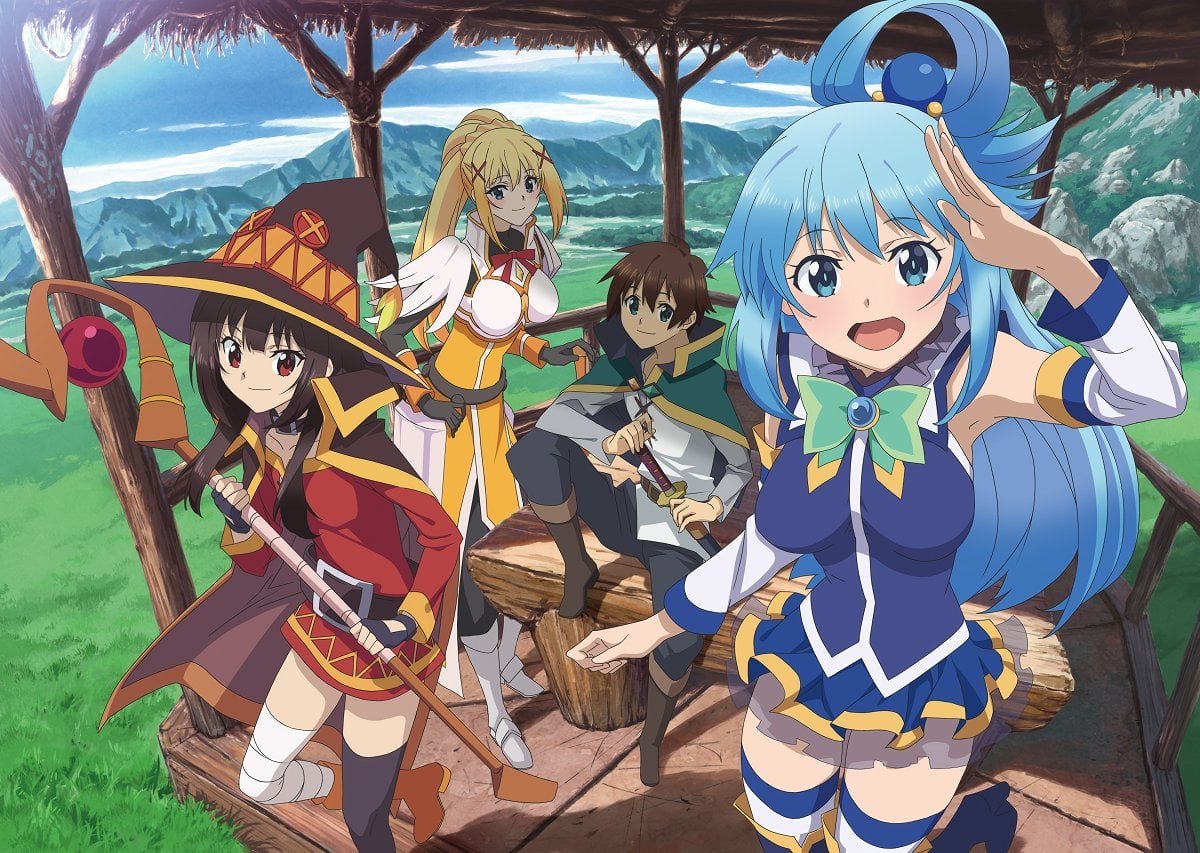 Konichiwa! Like I always say, and no use in repeating myself again and again. Anime is the best, right? If not, the anime at least reading the mangas too makes some difference, right?

Today I am going to talk about KonoSuba. How many of you have already watched this? Well, good for you. And if you haven’t yet then don’t keep waiting, read this page and then just go and stream it now.

Then after I share about the anime, I am going to talk about some anime that are quite similar to this one? Are You Ready for It? Wait! Did I just now sound like Tylor Swift?  Kidding anyways let’s begin!

Kono Subarashii Sekai ni Shukufuku wo! or in English, it is known by the name; KonoSuba: God’s Blessing on This Wonderful World! The anime is an adaptation of the Japanese light novel. The anime has 10 episodes in total and premiered in January 2016. It has 3 seasons and each runs for 24 mins approximately.

Adventure, comedy, and supernatural anime are very popular and the novel is among the bestsellers. The winter anime is rated 7.9 by IMDb and 8.13 by My Anime List (MAL). The novel has 3 volumes and the manga is still publishing its volumes. Now a word on the story.

The anime follows the story of a boy who after death is given another chance to live in a land of fantasy and fiction. Follow his adventures in this land followed by his wired group of companions. This is indeed a fun watch and should not miss your watchlist.

Oh, before I carry on with the rest. You will find the anime on Funimation, Gogoanime, and Crunchyroll.

Now I will give you a list of animes that are quite like this one as I promised then let’s start amigos!

The Devil is A Part-Timer, is adapted from a Japanese light novel. The comedy fantasy anime also has a manga version which has been adapted and is still published to date. The anime made its debut in 2013 and has 2 seasons with 13 episodes each. The runtime of each episode is 24 mins.

Rated 7.7 by IMDb and 7.79 by MAL, the anime is available on Funimation and Netflix.

What will happen when Satan cannot return back to his place and end us getting stuck in modern-day Japan. He won’t decide to stay there permanently, will he? But now with no magic to support him. He decides to work as a part-timer in a fast-food joint. Fun and laughter ensue so don’t miss this one anyway.

This one surely is one interesting anime. I can tell you a little secret, that is, this is one of my binge-watching anime. So, for the ones who haven’t yet seen this one, you can rest assured that this one will surely keep you glued.

This has been adapted from a 13 series manga volume. The anime has 11 episodes and runs for 23 mins each. It also has two special episodes.

The action-adventure supernatural anime made its debut in 2007 and is rated; 6.85 by MAL and 6 by IMDb.

Meet our sweet, meek but clever heroine who can see a ring around people which denotes that they are dead or in short zombies. She, out of sheer coincidence, crashes into two guys who are actually zombies and work at an agency called zombie loan.

Now she is too forced to work with them. Now always at their toe, the trio along with other agency members hunt down the zombies who are dangerous on the earth.

And the anime is there on Amazon Prime and Crunchyroll folks.

Rin-Ne is a manga that was later serialized. The anime adaptation premiered in 2015 and has 3 consecutive seasons. Each has 25 episodes and runs for 24 mins respectively. Again, this is one of the interesting anime that deserves a space on your plate.

I watched this twice, thrice God knows how many times. The interesting story and the comedy within it are, what actually had me intrigued.

The anime revolves around a high school girl who as a child got lost in the woods but later on came back safe and sound. Later on, it’s revealed that she actually went to heaven unknowingly. After that incident, she earned the power to see ghosts.

Later on, she meets her classmate who used to always be absent. But he has a mysterious past with him, what is it? Watch the anime on Gogoanime, Kissanime, or Crunchyroll to find out.

The anime again is a must-watch adapted from a Japanese light novel. The adventure fantasy comedy anime is rated 7.5 by IMDb and 7.74 by MAL and premiered in 1995. The anime has a total of 5 seasons running 22 mins each. The anime completed its air in 2009, it also has a manga adaptation.

It follows the life and adventures of a teenage sorcerer. As she and her companions go on a quest to hunt gold. The anime is available on Funimation.

There are only a few people alive on this earth who haven’t watched this anime. Even if they haven’t watched at least heard the name if I am not wrong. This is quite a famous anime that made its name in the world of anime.

Ranked #17 in MAL, I earlier on told you this is pretty famous. Now with a rating of 8.8 from IMDb and 8.95 from MAL. The anime has a total of 8 seasons with 51 episodes. Each episode runs for 24 mins. The manga-adapted anime has 8 seasons and 201 episodes in total. The anime premiered in 2006.

When Japan is under the control of the aliens after it invaded the city, there’s still hope. A young Samurai together with others form a clan to combat them. Now, will this unemployed lot be able to rescue them?

The anime is there on Netflix, Funimation, Crunchyroll, and Hulu.

Again, I am sharing with you guys an anime that is not only famous but also one of the most-watched series. And most importantly it’s also not quite old but had its debut quite recently. The anime premiered in 2018.

What will happen when a Vortex gets dropped in Yakuza’s life?  A life that is about to bring great changes. Watch the anime unfold on Crunchyroll and Funimation.

The anime runs for 24 mins. The comedy, slice of life, supernatural, sci-fi anime has 12 episodes in total.

Also known by the name of Grand Blue Dreaming the anime focuses on Iori as he decides to move into his uncle’s dive shop as he attends his college. Amidst all the waves and the fun frolic nature of all, he decided to join the diving club as more fun and water awaits his path.

The anime is available in Prime Video, Gogoanime, and 9anime.

With a rating of 6.90 from MAL and 6.2 from IMDb, the anime has 13 episodes with runtime being 24 mins each. The anime was created after which it was later serialized into manga and light novels. The anime debuted in 2011. The action, adventure, and fantasy anime are there in 9anime and Gogoanime.

The anime takes place on an alternative Earth which is in grave danger and needs saving. As the Princess summons a prince to save them will he be able to rescue them all and save the Earth?

DO READ | Is Anime For Kids? Know Here!

How To Summon a Demon Lord has 2 seasons and 12 episodes respectively with runtime being 24 mins each. This is a harem anime. Now if you are not clear about this genre, let me tell you. It means that when a single boy character, mainly the make lead, is loved by all female characters. In short when multiple female characters fall for the same chap.

Is It Wrong to Try to Pick Up Girls in a Dungeon? is adapted from a Japanese light novel. It also has 13 volumes of manga that are still publishing volumes. The anime is on Crunchyroll and Netflix.

The city of Orario is always bustling and is jolly with i8ts people and adventure. At one such time, Bell’s life was saved by a swordswoman where the dungeons are the monster’s hunting ground. As his life is saved, he gets inspired by her strength and decides not to slack any further.

The anime is rated 7.57 by MAL and also 7.5 by IMDb. The action-adventure comedy fantasy romantic anime has 4 seasons and 37+ 3 OVA episodes which run for 24 mins each.

The action-adventure anime has 3 seasons and 25 episodes in total. The 25 mins anime debuted in 2014. IMDB rating of 7.6 and MAL rating of 7.95. The Fall anime is there for your watch on Funimation and Netflix. Go and watch it there.

Elder Tale is an online Hit Role-playing game. This worldwide game in Japan is famous worldwide. But what will happen when thousands of players get trapped online? Will they get accustomed to this new reality and embrace it or will they try their best to escape?

Everyday Life with Monster Girls, the 2015 anime is rated 6.7 by IMDb and 7.01 by MAL. The anime tells us about a world where fantastic creatures and human beings both live and exist together.

What will happen when all the fantasy creatures fall for a high school guy and he becomes a part of the inter-species exchange program. Nothing could go wrong right?

The harem anime has 12 episodes and runs for 23 mins each.  You can watch it on Crunchyroll.

So here is the list of the anime that you can definitely watch on their respective platforms. I enjoyed each and every one of these And I am hoping you will too. The trailer of the anime is on YouTube and other pages. You can watch them after going through this article.

Have a lovely time as you watch all the series. While we return soon with more interesting updates and news. Till then Sayonara!