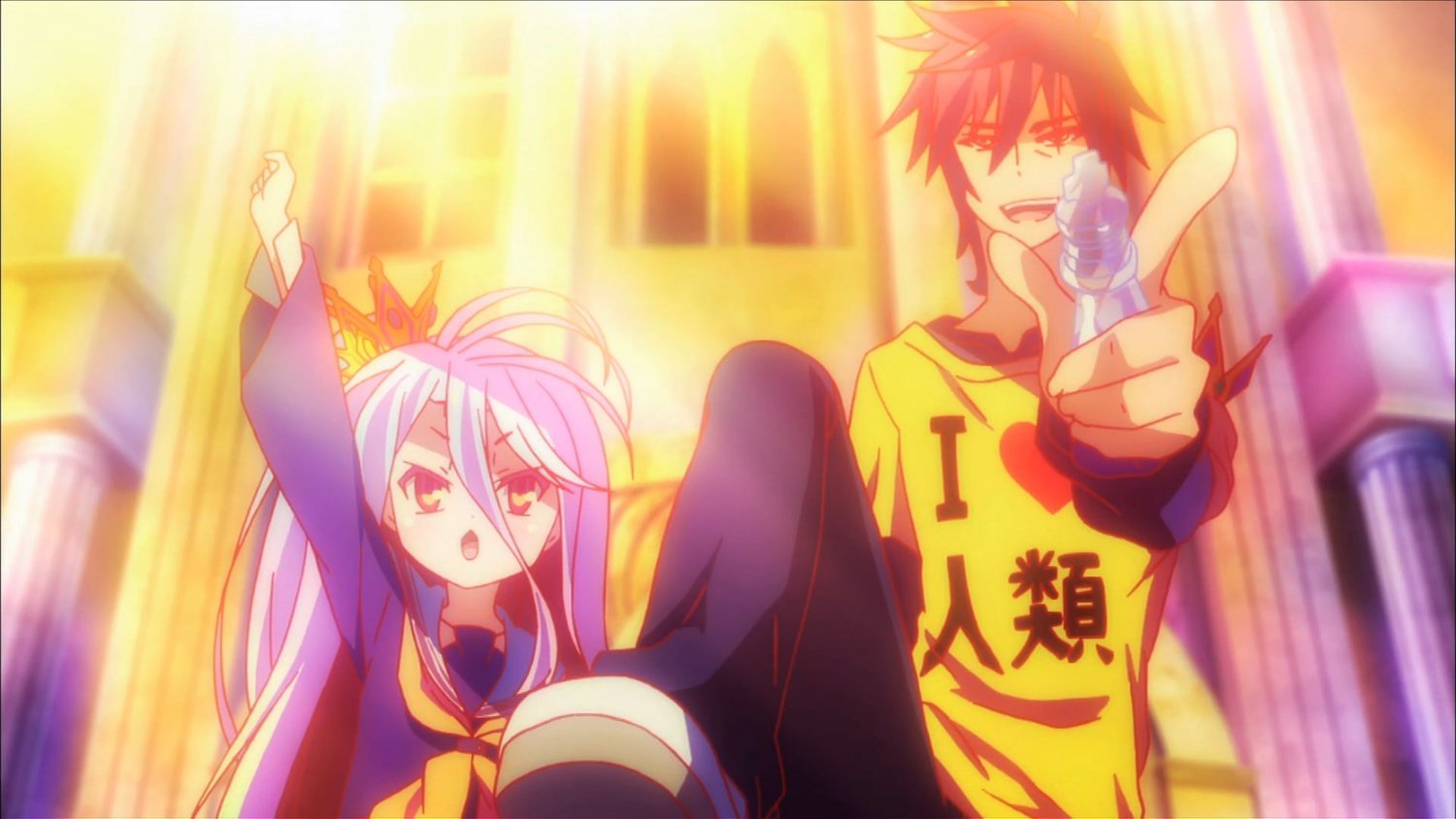 Do you like to get absorbed into virtual life be through games or shows? Do you like to stay in your cozy virtual worlds away from the noise of the world? Then the very renowned anime called “No Game No Life” must be your cup of tea! If you are an ardent fan of the show let’s brush up on some of the basics of the show first. This taste of the storyline belongs to the creative and innovative world of anime that is inspired by the gaming world. However, it is originally an adaptation of a Japanese light novel that goes by the same name. Writer Yu Kamiya indeed introduced a very fresh idea of eleven volumes for the readers to indulge in. The anime has been directed by Atsuko Ishizuka and contains twelve episodes. ‘No Game No Lide’ with multiple producers including Yōhei Hayashi, Shō Tanaka, Mika Shimizu aired on Anime Network, KBS, Tokyo Mx, and a couple of other channels from April 9, 2014, to June 25, 2014. The show mainly focuses on a pair of step-siblings named Sora and Shiro who are pro-gamers and very skillfully and heavily involved in gaming. They are summoned to a world of completely different reality by a surprising swerve of events. But we all know that everything happens for a reason, right? The reality these siblings are transported is a gaming a reality where little thing is decided by the laws and results of different games. Sora and Shiro seem to ace all the challenges with their talent as they stand on a challenging and enormous mission to defeat the God of Games. Sounds exciting, right? It is normal to be curious about more shows that fall under the same umbrella of action and sci-fi genre or stories from the protagonist of gamers and heroes. Let’s dive into some references to such shows!

1. The World Only God Knows

There is a brilliant resemblance between both the shows of No Game No Life and The World Only God Knows as they both draw the visual picture of being remarkable heroes in the virtual gaming world as the lead characters assert their dominance through their super gaming skills and talent. This is also a supernatural fiction adapted from the manga name ‘Kaminomi’ that has wholly been created by Tamiki Wakaki in a package of twenty-six volumes. Manglobe diligently produced the anime. The show talks about an individual named Keima who is exceptionally talented in games like Dating-sims on the internet. It started with him being given the responsibility of gathering souls which he got to know from Elsie, his communicator for the game. All three seasons have several other gripping actions and events that take place and are handled by Keima to ward off evil. Go check it out now if you want another show that will give you the familiar feeling of ‘No Game No Life’ and also make sure to bring a smile to your lips.

This is another gripping that reflects on the psychological insecurities of individuals. This is also adapted from a Japanese novel created by Reki Kawahara and Hima that was published in 2009. The anime has been written by Hiroyuki Yoshino while Masakazu Obara directed it in perfect sync. The narrative is from the point of view of a middle-schooler struggling with his physical attributes like weight and height because of the typical bullying that takes place in schools. The middle schooler is named Haruyuki Aritra who confides in gaming to build his mental strength and peace. A fortunate phase of his life began as Kuroyukihime, who was vice president of the student council, introduced him to a game called “Brain Burst”. This helps him feel belonged to a different world in the form of augmented reality because here he is not defined by his physical attributes but by his ultimate hobby and passion for gaming.

The show of Hack//Sign is an original anime series that has been directed by Koichi Mashimo. This show is also about a virtual reality revolving around the magic user name Tsukasa who is a Wavemaster and an extremely virtual player in the game called ‘The World’. Here we get to see the exhilarating journey of the character as he finds himself helplessly caged in the virtual cage of ‘The World’ and tries to figure his way out and find the key to his escape.

4. The Irregular At Magic School

The show called ‘The irregular at magic school’ also talks of the journey and experience of a pair of siblings that are existing in a different reality than the actual one. Their reality is filled with magical fantasy unlike the virtual fantasy in ‘No Game No Life’.

Sword Art Online is another adventure fiction that switches up the viewer’s emotions from excitement to joy to curiosity just like the show of ‘No Game No Life’. It has also followed the novel written by Reki Kawahara and stunningly illustrated by ABEC. A-1 did a brilliant job of converting the light novel series into an anime. In 2012, the first season of Sword Art Online aired from July to December, and the second season aired in the same month in the year 2014. The success of the show was proved in the release of several films inspired by the same series. Just like the siblings in No game No Life the main character in this show called ‘Kirito’ has also stumbled upon a dangerous game called Sword Art Online. Against his will, he is trapped inside the virtual world of the online game where he has to conquer a hundred levels in the brilliant medieval setting of equipment and villains.

6. In the Land Of Leadale

Takeyuki Yanase directed this show for all the gamers who wish they could live their games. Stunningly scripted by Kazuyuki Fudeyasu, this show is inspired by the novel of the same name framed by Ceez. Ever since it started airing on January 2, 2022, on many different networks is a trending favorite among anime lovers.  The story starts with the unfortunate hospitalization of the main character Keina Kagami due to a traumatic accident but then she dies and travels forward in time by two hundred years. After that, she wakes up in the world ‘Leadale’ which is familiar to the game she played, and also regains the same identity she had in the game called Cayna. This brings us to the land of Leadale as Keina with her gaming existence of Cayna thrives as a powerful opponent in the game and fulfills her several adventurous missions and keeps the viewers hooked onto the show as they wait for more.

This is a show that has the same significance of actions and supernatural powers as shown in ‘No Game No Life’. In case you are looking for a setting that won’t alter realities but still have the same addictive and exciting effect then Jujutsu Kaisen is definitely the suitable fit for that preference.  The characters are amazingly shown and the whole coordination of the visual communication sector was so in sync that it increased the reach of the original manga that it was taken from. It has only one season with an enormous fanbase who are most eagerly waiting for the second season. Director Sunghoo Park has well put together the story of a boy named Yuji Itadori who goes ahead to become a jujutsu student under the training of his master named Gojo. Both of them have very entertaining personalities and are shockingly powerful in terms of power. Itadori has accidentally engulfed the finger of the cursed become. As a result, ends up with a disorder of dual personality that switches between good and evil according to the tolerance of Itadori. It is a very fresh watch that will drown one in multiple rounds as the characters set out to conquer different devils.

Btoom is about the story of the character named Ryota Sakamoto, another skilled gamer like Shiro and Sora of ‘No Game No Life’. Similar to them he also gets stuck in the virtual world of his favorite game by a single mistake and cannot escape without defeating all the negative elements pitted against him.

Log Horizon is a very popular anime that has caught the attention of all binge-watchers and attained good scores from all the critics. Satelight adapted and aired the anime since October 5, 2013. This adventurous anime has completed two seasons. It involves heavy glimmers of fantasy and science-fiction as it comes up with an exciting and enthralling game called ‘ElderTale’. This game has many users caught up in the game. It helps the users go to another reality where there are many hazardous games, Shiroes and his friends are among those reckless users that put up their toughest front in front of their hurdles.

Directed by Yoshinobu Tokumoto backed up by the writing of Shū Miyama, this anime has been recreated from a Japanese manga series. This is also about the alteration of reality like the one similar to No Game No Life. This show revolves around a seventeen-year-old high-school student called Kaname Sudō. His flow of life got him an invitation from a friend to an app called ‘Darwin’s Game’. The game instills a risky battle between life and the dearth of death as Kaname fights for the vibrancy of life and aspires to end the ultimate evil overcoming all the perilous obstacles. Hope you will check out the list of shows as soon as possible. We are looking forward to your take on them. Stay connected for further updates.