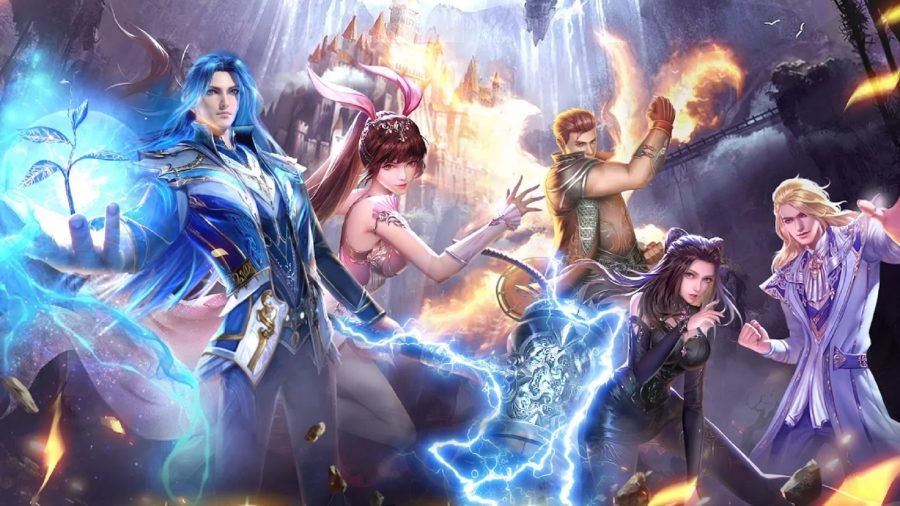 Soul Land is a misunderstood anime. Although the animation is not typical of Japanese anime, you should watch it for the storyline. It has a good amount of action, the animation isn’t bad and is only getting better, the characters are entertaining, and the world-setting itself is intriguing and captivating.

Soul Land appealed to younger viewers more than other Xin Xia or Xuanhuan Donghua out there; there’s certain magic through its story that perfectly blends the youthful romance and the same old cliche of any fantasy and cultivation story.

Soul land series production was first announced in 2017. Preparations for filming began on November 1, 2018, and filming began by the end of the year. Filming began in January 2019 and will continue until July of the same year.

Douluo Continent is a 2021 Chinese television series based on Tang Jia San Shao’s fantasy novel of the same name, starring Xiao Zhan and Wu Xuanyi. On February 5, it debuted on Tencent Video, CCTV, and WeTV.

So, if you enjoyed it and are looking for more anime like Soul Land, you’ve come to the right place because we have the ideal list for you.

Gu Hai is transported to another world from the twenty-first century, where he becomes a formidable trader. During a war, he also served as a strategist for the Chen Empire.

Seeing all of this, a fairy from heaven took an interest in him and assigned him a mission that would cause chaos in both heaven and earth.

This is a one-of-a-kind film in the cultivation genre, but it is well worth seeing. While both main characters find themselves in a different world, the concept differs slightly here.

This Chinese anime, like Soul Land, effectively employs the cultivation concept, and the main characters share many characteristics.

The main character is a cultivation master who, after being killed, reincarnates as a young waste lord. He swears he’ll never forget his former adversary.

He requires the Spirit Sword to grow in power in order for him to be a supreme master in all three worlds. How will his ambition pan out in the end?

Spirit Sword Sovereign is a Chinese anime with the main concept of cultivation, and it is as epic as Douluo Dalu.

Both main characters grow from being weak to become strong, and they are given a second chance in life. As a result, we believe it is an anime similar to Soul Land.

Qin Chen, a military genius, is killed on the forbidden land by his people, unintentionally activating the power of an ancient sword.

A boy inherits Qin Chen’s well after three hundred years. He fights until the end to rewrite the myth of a man who wanted to protect everything.

The first parallel you can find in this anime is the MCs being reincarnated after a pitiful death.

It has some good martial arts action scenes, weak to well-developed characters, and a standard plot that is worth watching.

ALSO READ: When Can You Expect Ascension Season 2 Release Date?

Battle Through the Heavens

The story takes place in a world where the strong trample on the weak and magic has no place. Due to an incident, Xiao Yan lost all of his martial arts skills.

After a few years, he discovers the reason for it and decides to pursue a single who will lead to the resolution of all the mysteries.

Doupo Cangqiong’s story isn’t as original as Douluo Dalu’s, but it’s still a lot of fun. The story is one-of-a-kind, and it never fails to entertain the audience.

It’s a bit of a mystery, and the action scenes are fantastic. So, if you’re looking for an anime that’s similar to Douluo Dalu, this is the one.

Shi Hao is born in a unique world where several villages compete for power, and despite being born in impoverished circumstances, he is endowed with incredible talents.

His clan lends him everything they have in order to fight the monsters and other powerful clans. His name quickly spreads across unknown lands.

The representation of power levels and the ability to inherit beast powers are the main features that distinguish it from other anime like Soul Land.

Xue Ying territory is well-known throughout Tranquil Sun Province for its strength. It is also the residence of our hero’s Dong Bo clan.

He lives a peaceful life with his family, who previously had complications. However, his peaceful life is shattered, and the only way to restore it is to gain power.

I like how the action scenes in this anime are flashy while the animation is standard. It covers the majority of the elements from Soul Land with a similar directed plot.

If you’re looking for an action-packed anime like Soul Land, you should give this one a shot.

The story takes place in a world where only strength determines power. Lin Dong’s father was crippled and crushed by Lin Clan’s genius.

Lin Dong is only motivated by one thing after witnessing all of these incidents firsthand: vengeance. With nothing but his willpower, he discovers a stone talisman that leads to a larger cause.

The main characters in both of these anime shows are motivated by a cause, and their development is depicted in stages.

It makes greater use of cultivation and martial arts, and if you haven’t seen it yet, you’re missing out on something incredible.

Tales of Demons and Gods

Ni Lie, the strongest Demon Spiritist, was killed in a battle against the Sage Emperor, along with those close to him.

He is reincarnated as a thirteen-year-old boy and begins a new life as the weakest member of his class. Can he become strong and protect those he cares about with the knowledge he gained from his previous life?

Yao Shen Ji follows the same reincarnation path as Soul Land, and both are full of adventure and various stages of magical power.

In addition, the animation in these anime shows is similar. So, if you haven’t seen this one yet, you should do so right away.

After many years, the Meteoric Tear fuses with his body, bringing his techniques to a whole new level, and his father eventually recognizes his worth.

Although this anime does not include the concept of reincarnation, many other aspects are similar. Both are based on cultivation and martial arts, and they have excellent action sequences.

In both stories, the characters’ power levels are divided into stages, and thus it is an epic anime like Soul Land that you must watch at all costs.

Wei Wuxian founded the Demonic Sect for a greater cause, but it is reviled by millions. Furthermore, he was betrayed by the clans he considered to be his family.

After a few years, he is incarnated into the body of a lunatic, and he embarks on a journey to right everything with his best friend Lang Wangji.

You can tell how similar it is just by reading the premise. Both anime are Chinese and feature the concept of reincarnation.

You’ll enjoy this one just as much as Soul Land because they’re both cultivation anime with some good action scenes.