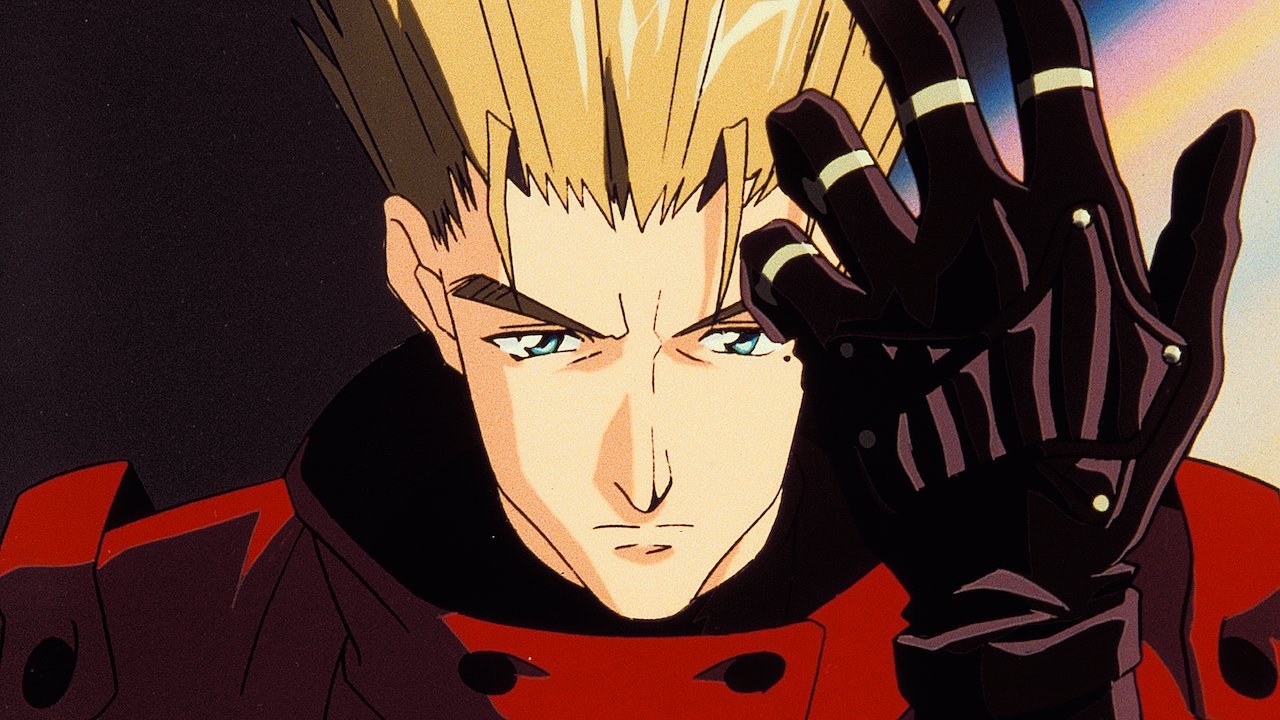 Need some Trigun anime recommendations? Here’s this article to find your way with the 12 best anime tike Trigun. Trigun has become an example to other anime because it was the 1st anime to be classic science fiction, action, adventure, and comedy series at the same time, and it was also the 1st most anime to adopt and portray the western concept so vividly. Coming to the article, these are the list of anime that are similar to Trigun in several multitudes of perspectives. The ways include having similar western themes, protagonists, actions, and more. 12 best recommended Trigun-like anime are, 1. Samurai Champloo, 2. Cowboy Bebop, 3. Desert Punk, 4. Rurouni Kenshin, 5. Black Lagoon, 6. Hellsing Ultimate. 7. Hellsing, 8. Outlaw Star, 9. Great Teacher Onizuka, 10. Gungrave, 11. Trinity Blood and the last one 12. Gun Sword.

Starting with the 1st one, Samurai Champloo (Manglobe, 2004). It is a Japanese action anime series, whose story revolves around a waitress named Fuu who works in a tea house. There he rescues two master swordsmen, called Mugen and Jin from their execution to help her find the ‘Samurai who smells of sunflowers. The series acquires some incredible actors on the set of casting such as Kazuya Nakai as Murgen who was the lead character. Ginpei Sato, Ayako Kawasumi, Otoya Kawano, Fumihiko Tachiki, Isshin Chiba, Eri Nakao, Hiroshi Naka and many others in the list to mention. The series season 1 is available on Amazon Prime and the entire anime is currently streaming on Hulu for free.

Cowboy Bebop comes next on the list. Cowboy Bebop (Sunrise, 1998) is also a Japanese scientific anime series that was set to release in the year 2917. The plot follows the adventures and tragedies of a bounty hunter crew traveling in their spaceship called the Bebop. It contains some big names of the franchise like, Daniella Pineda, John Cho, the stunning Elena Satine, Mustafa Shakir, Alex Hassell, Lucy Currey, Wendee Lee, Rachel House, Geoff Stults, John Noble, and many more as well. The series is available on both the OTT, which is on Netflix, and Amazon Prime.

READ MORE | Are You Waiting For Spotless Season 2 Release Date?

3rd name that pops up is the Desert Punk which is a post-apocalyptic manga series written and illustrated by Usune Masatoshi. The anime focuses on the adventures of a wandering mercenary known as Kanta Mizuno and whose nickname was Desert punk. Due to his seemingly incredible feats of skill and being daring while on the job. It had shown how he makes new friends and enemies as well throughout the series. In the casting part, it has a countable of actors such as Cole Brown, Tomoko Kotani, Otoya Kawano, Yuko Taniguchi, Norio Waka moto, and a few more. The anime is available on many OTTs like Amazon Prime, Hulu, Crunchyroll, and Just Watch.

Following the series, the 4th name is the Rurouni Kenshin which also has another name that is Rurouni Kenshin and Samurai X. It is a Japanese action anime series. It has received enough appreciation for its plot, which emphasizes a wandering Samurai with a past. Who embarks over a past on a quest to uphold justice and help the innocent by using his sword, but without slaying any man? It has some remarkable actors like Patrick Seitz, Josh Grelle, J. Michael Tatum, Brandon Potter, Trina Nishimura, John Swasey, Christopher Wehkamp, and many others. The 1st part of the anime is available on Prime video and the entire anime is available on both Hulu and Netflix.

The fifth name is ‘Black Lagoon which is also an anime series. The story revolves around the manga of Rei Hiroe. The plot portrays the tired of corporate life. A businessman decides to be around the mercenaries who eloped him. And in the latter times, he becomes a part of their gang. Its brilliant casting includes Maryke Hendrikse, Brian Drummond, Brad Swaile, Dean Redman, Elmar Gutmann, and others. Right now, it is available on Netflix.

Hellsing Ultimate of the year 2006, comes as the 6th movie on the list. The story revolves around, the vampire Alucard and his master Sir Integra Fairbrook Wingates Hellsing along with their newly sired ward Seras Vitoria. They all try to protect England from a war-crazed SS Major who seeks to give rise to an eternal war with his vampire army. It is a long cast, Crispin Freeman, Katie Gray, Ralph Lister, Victoria Hardwood, and others. The series is streaming on Netflix.

Hellsing (Gonzo, 2001) is the 2nd and last sequel of Hellsing. Its genre is a bit different, as it falls under the horror itself. It is a Japanese supernatural horror anime series. The story is all about showing, Hellsing to be an organization which is specialized in dealing with supernatural threats. Which dispatches a powerful vampire called Alucard to eliminate a vampire that had turned the villagers of Cheddar into ghouls. Casting has no similarity with its 1st part, it is by Katie Gray as lead, Crispin Freeman, Ralph Lister is one of the major characters along with, Steven Brand, Tricia Dickson, and many more. The series is available on, Hulu, Netflix, and Prime Video.

Outlaw Star is a 1998 Japanese anime series under the genre of adventure, space opera, and space western. The plot follows the protagi=onist Gene Starwind and his motley crew of an inherited ship dubbed the Outlaw Star, as we’re searching for a legendary outer space treasure trove named ‘Galactic Leyline’. Along with such a storyline, it has a good casting as well, Bob Buchholz, Emilie Brown, Wendee Lee, Bridget Hoffman, Richard Cansino, Bill Timoney, and others as well in the list. The anime is streaming on both Hulu for free and Amazon Prime.

Great Teacher Onizuka is another most loved anime of all time. It is an anime of 1999 and is also abbreviated ad GTO. It is a Japanese comedy anime series in the adaptation of a manga by Tooru Fujisawa. The plot is all about Onizuka, who is an ex-gang leader and has a dream of becoming the greatest high school in all of Japan. Finally, enrolls as a homeroom teacher at a prestigious private school. This series has some big-name associated with the anime franchise, Miori Takimoto as the lead along with Tsuba Honda. Akira, Yuki Yamada, Gaku Sano and others are involved. Currently is on Netflix and GTO as well.

Number 10th is the Gungrave of 2003 under the genre of Action fiction. It has a completely intense storyline. It shows, that two different people, Brandon Heat and Harry MacDowell find success and betrayal at the same time while being a member of a crime syndicate. Casting did full justification to the series by Lex Lang as Nathan (lead), Steve Blum, Doug Stone, gorgeous Kari Wahlgren, Tom Wyner, and many more. Currently, it is streaming on Hulu and Amazon Prime.

Coming in the tail of the recommending list, next comes the Trinity Blood. It is a series of Japanese light novels, which is written and illustrated by Thrones Shibamoto. This series took place in a very different situation altogether. 1900 years after an apocalyptic war, between humans and vampires, the series focuses on the ongoing cold war between the Vatican of that time. It was between the human government and the new human empire. The series is a perfect blend of science fiction, fantasy, and political intrigue with a casting of Troy Baker as the lead, Hilary Haag, famous (Russell Wait), colleen, and many more. A prime video providing all the episodes currently.

Last but not least comes the ‘Gun Sword’ which is also a Japanese animated television series under the direction of Goro Taniguchi. The story is set on the ‘Planet of Endless Illusion’ which is a place where rogues of all sorts gather. It is about a protagonist named Van, who travels the whole world and is searching for a man with a clawed right hand who killed his bride. Finally, with the progress, it is been shown, that he is joined by several other travelers, and surprisingly each linked with that clawed man by a personal loss. The series got aired in the March of 2007. It has an amazing set of star-cast like, Michelle Ruff, Stephanie Sheh, the very famous (Yuri Lowenthal), Karren Strassman, Megan Hollingshead, and many more. Streaming currently on Hulu for free.

So, here are some of the above-mentioned recommended animes like Trigun. There are many more to add to the list as well. Also, many more going to be joined under Trigun in further days for sure!