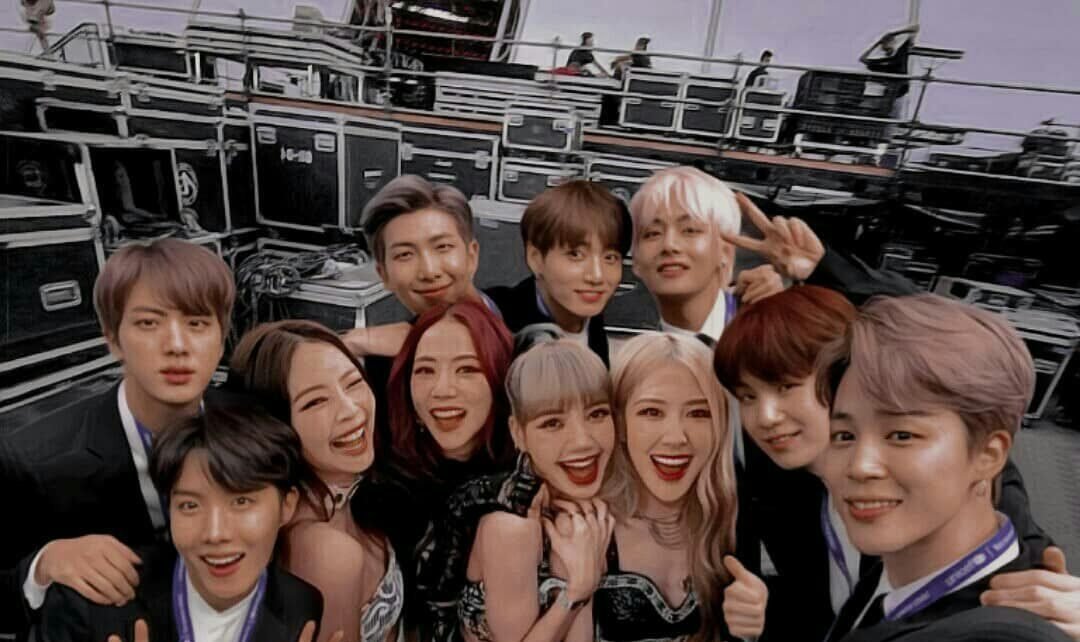 Both the bands are equally good and have cemented their place in the youth’s hearts. They have created a lot of hype among youngsters with their songs and their performances. With their talent and their amazing performances, they have won hearts and it is justified why people are so much after them.

There is hardly any song of these bands which has not trended on Instagram Reels or YouTube shorts. Today, almost everyone knows about these bands, or at least everyone has heard their name.

Among the many things that people want to know about these bands, one of the things is what type of relationship these two bands share with each other.

Do they like each other? Are the rumors about their relations true?

Such questions must be hovering in your mind right? Well, you are at the right place if you want to have a detailed insight into the type of relationship the two popular bands share.

Are BTS And Blackpink Friends?

Considering the popularity of these two bands, it feels that these two must be each other’s rivals, competing with each other to stay ahead in terms of everything, but this is not the case!

BTS and Blackpink share very cordial relations with each other. We cannot say that they are good friends, but they are not enemies either. The members of both bands have been seen greeting each other cordially at public events. They have never been seen ignoring each other’s presence.

Now that we are talking about their relations, an interesting thing to be shared is that BTS member V aka Kim Taehyung is rumored to be dating Blackpink’s Jennie. What makes people believe this rumor more is that V was recently seen at a party organized by Blackpink to celebrate the success of their album, Born Pink. Both of them have been rumored to be dating since a picture of both of them was getting viral from a trip to Jeju Island.

As per the information we received, the party was held at a cultural complex in Seongsu-dong, Seoul on September 14th, 2022, with very strict security. It has been reported that V was not only present at the party but he also stayed there for quite some time.

Last month, another picture went viral of the two of them where Jennie was with Kim during his visit to LA. Although the authenticity of the viral picture cannot be guaranteed, it is being believed that the two are dating.

ALSO READ: Which Is More Popular BTS Or Blackpink?

Also known as Bangtan Boys, BTS is a South Korean band, formed in 2010. The band debuted in 2013 under Big Hit Entertainment. They launched themselves with the album 2 Cool 4 Skool. The band has seven members Jin, Suga, J-Hope, RM, Jimin, V, and Jungkook. They all write and produce most of their own content.

Their name, BTS, stands for the Korean phrase Bangtan Sonyeondan which means  “Bulletproof Boy Scouts”. This name signifies the group members’ desire to break stereotypes, high expectations, and criticisms that are bombarded on adolescents like bullets. In July 2017, the band announced that their name would also stand for Beyond The Scene, as a part of their identity.

BTS was initially supposed to be a Hip Hop band but that didn’t prove to be very successful. Therefore, they changed their plan and decided to change their direction because they felt a change in the path that they have to follow would open new avenues for them.

The band has grown by leaps and bounds and is undoubtedly one of the best bands today in the world.

Let us now acquaint ourselves with the members of this band.

1. RM – Kim Namjoon: He is known as the leader of the band because he was there from the beginning. Among all the members, he is the most fluent one in English. If you see their interviews which have been conducted in English, you would see that he is the one who translates for the rest of the members. He was born on 12th September, 1994.

2. Jin – Kim Seokjin: The oldest one in the group, Jin is popular for being very handsome! He is also known for his funny and witty nature. He was born on 4th December, 1992.

3. Suga – Min Yoongi: The shyest and quiet member of the group, Suga is also a solo artist. He talks about mental health and the problems faced by the younger generation. He was born on 9 March 1993.

4. J-Hope – Jung Hoseok: The most energetic member of the group is J-Hope. Born on

5. Jimin – Park Jimin: The cutest, the most beautiful, and the member with good moves, Jimin was born on 13 October 1995.

6.  V – Kim Taehyung: The most mischievous member of this group, Kim was born on 30 December 1995. He has a very deep voice which is in contrast to his personality.

7. Jungkook – Jeon Jeongguk: He is the youngest one in the band, and has a good talent for photography, sketching, and filmmaking. He was born on September 1, 1997.

Formed by YG Entertainment, Blackpink is an all-girls band that debuted in August 2016 with their solo album Square One. Throughout their career, they have broken several records.

The interesting part about this band is its name Blackpink, which consists of the name of two contrasting colors. Generally speaking, Pink is the color that depicts femininity. The band wanted to represent more than just being a group of beautiful girls, who are stereotyped to love everything pink. To break this stereotype, the band was named Blackpink. With its name, the band wants to convey the notion that every member of this group is full of talent, strength, and inspiration and not just beauty.

Let us now know something about the members of this band.

The oldest member of the band, Jisoo is referred to as the Unnie of the group. Unnie means elder sister in Korean. Apart from being the mood-maker of the band, she is the only member who is not very fluent in English. However, she is able to speak Korean, Chinese, and Japanese with utmost ease. Before she started her career with Blackpink, she appeared in several music videos and commercials.

A singer as well as a rapper, Jennie is quite fluent in English, Korean, and Japanese. Before moving to South Korea in 2010 she was living in New Zealand. She was just 14 when auditioned with YG and got selected. Among all the members of the band, she is the first one to release a solo track titled “SOLO”.

Rose is the main singer of the group. She was born in New Zealand and raised in Australia. Dedicating her success to her father, Rosé says that it was her father who identified her passion for music and supported her to pursue a career in this industry. She is very fluent in English. She participated in YG Entertainment’s auditions in Australia and came first. She is very talented as she plays piano and guitar and covers English and Korean songs as well.

Lisa is the most followed member on Instagram and is the main dancer of this band. Born and brought up in Thailand, she speaks Thai and Korean. She was a part of a

dance crew at a very young age before she auditioned and became a K-pop idol trainee.

The interesting fact about her is that she auditioned for YG in 2010 and was selected out of the 10,000 people present.

She raps and sings but her body moves and excellent expressions attract the most attention of the fans of Blackpink. Lisa’s sensational dance moves are most of the time the cause of making the Blackpink videos hit and viral.