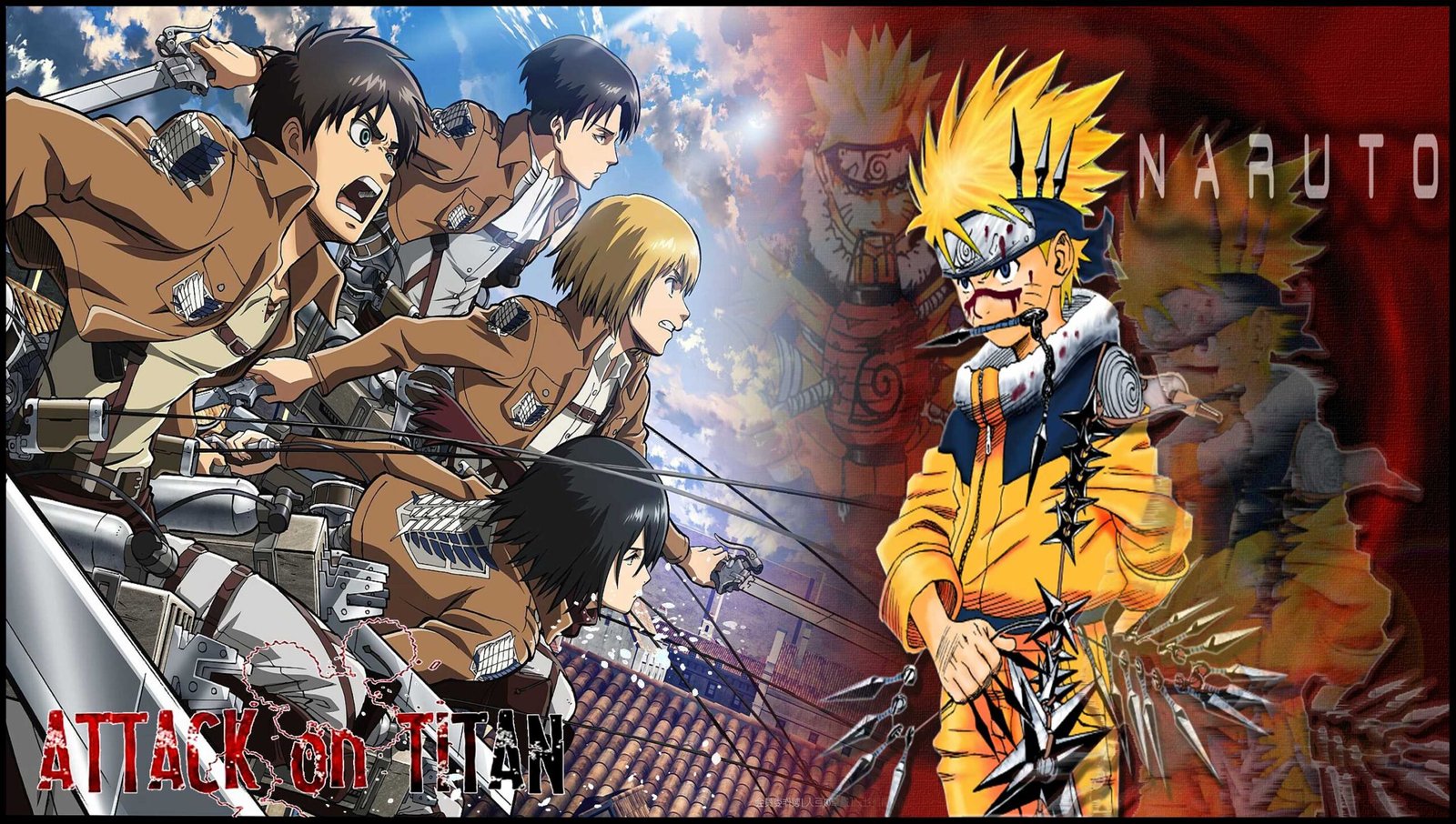 Hey all! How are you doing? Well, today we have come across the biggest debate? Confused or not both these animes or even the mangas are amazing, spellbinding, captivating! In short, beyond our words of description.

How many Naruto fans do we have here? And how many are fans of Attack on Titan? And how many are confused between the two? Well before there is a declaration of war among the fans let me sort it out for you. By the way, I was kidding, there is no war, I hope!

Let’s start with knowing the anime first. Then we will move into the debate and other points.

Shingeki no Kyojin, is a dark comedy fantasy anime adapted from a manga. The military superpower anime is licensed by Funimation and made its debut in 2013. It has finished airing with a complete movie and four-plus seasons. The runtime of the movie is 120 mins and that of each episode is 24 mins.

The anime is indeed very popular with a rating of 9 from IMDb, 4.8/5 from Crunchyroll, and 8.52 from My Anime List (MAL). It has gained the place of #1 popularity in MAL and the manga is too sold off like anything.

Now, coming to the story of the following anime. Titans are man-eating monsters, human beings to save themselves from their hands, hidden behind massive walls. Now things get ugly when one of these creatures breaks open the wall and thus these man-eaters enter their zone. Eren witnessed his mother getting killed in the hands of these monsters.

Now under a pledge to kill all the monsters he along with some others come together to erase them once and for all. Does humanity have any hope?

The VIZ Media action-adventure comedy anime has a total number of 220 episodes and 72 lists of manga volumes. The anime made its debut in 2002 and finished airing in 2007. Rated 7.96 by MAL, 8.6 by IMDb, and 4.7/5 by Crunchyroll. The anime is very popular and the manga is amongst the bestsellers. The anime has gained the position of #8 in MAL.

Let’s move into the plot now.

Naruto or Naruto Uzumaki belonging to the Konohagakure’s Uzumaki clan is the clan’s Shinobi. Born with nine tails he had quite a difficult childhood but nonetheless, he was goal-oriented.

Before Naruto came to earth, a nine-tailed fox beast was causing a rampant in the village of Hidden Leaf where Naruto was born. Now in order to protect the villagers from dying in hundreds and to stop the monster, the leader of the village killed the monster and sacrificed his life.

He sealed the nine-tailed beast inside the just-born Naruto. Shunned through his days of childhood he worked hard to earn the title of Hokage of Konohagakure. He became a successful ninja of his village and earned recognition.

He had both friends and enemies by his side but being a powerful ninja, he went through all challenges with his both foes and allies.

Now both you and I can see that both the animes are immensely popular. Like you sometimes, I also strive in utter confusion and dilemma. But not anymore. Why?

What are the Differences?

Without wasting many words, I will directly mention the key factors. One is an anime based on a hero who fights for humanity. While the other seeks adventure. While both of these won the fans’ hearts, we will focus on the key features pointing out both.

So, these are the few differences which we highlighted if you want to compare them both but in short.

Attack On Titan Vs Naruto

If you observe closely, you will see that the story of Naruto is much simpler than the other. Naruto has not only some of the few emotional scenes which will make you cry but also most of the characters of the following anime are shown in detail and each has a clear purpose.

So, if you also compare the soundtracks personally, I feel and I believe some of you may too. The soundtracks of Naruto are comparatively much better than AOT.

So with Naruto you will be very attached to its story, not to forget the emotional roller coaster.

Now if we talk about the ending, Naruto messed it up big time. At Least I feel that it was not the ending that I was expecting at all. Although AOT had a sad and emotional ending happy ending was never expected, which is quite obvious.

Both the anime is just awesome and you can definitely give them both a watch. But I personally feel that Naruto is much deeper than AOT. And I enjoyed it and got emotionally connected to it more.

Where To Watch These Series?

Naruto is ready for you to stream on Crunchyroll and Netflix.

While AOT is there on Funimation, Netflix, Crunchyroll, and Hulu.

So, that is all guys. I hope this article helped you a bit with your confusion and obvious dilemma. Well, then go and watch, while I go and stream my favorites as well!