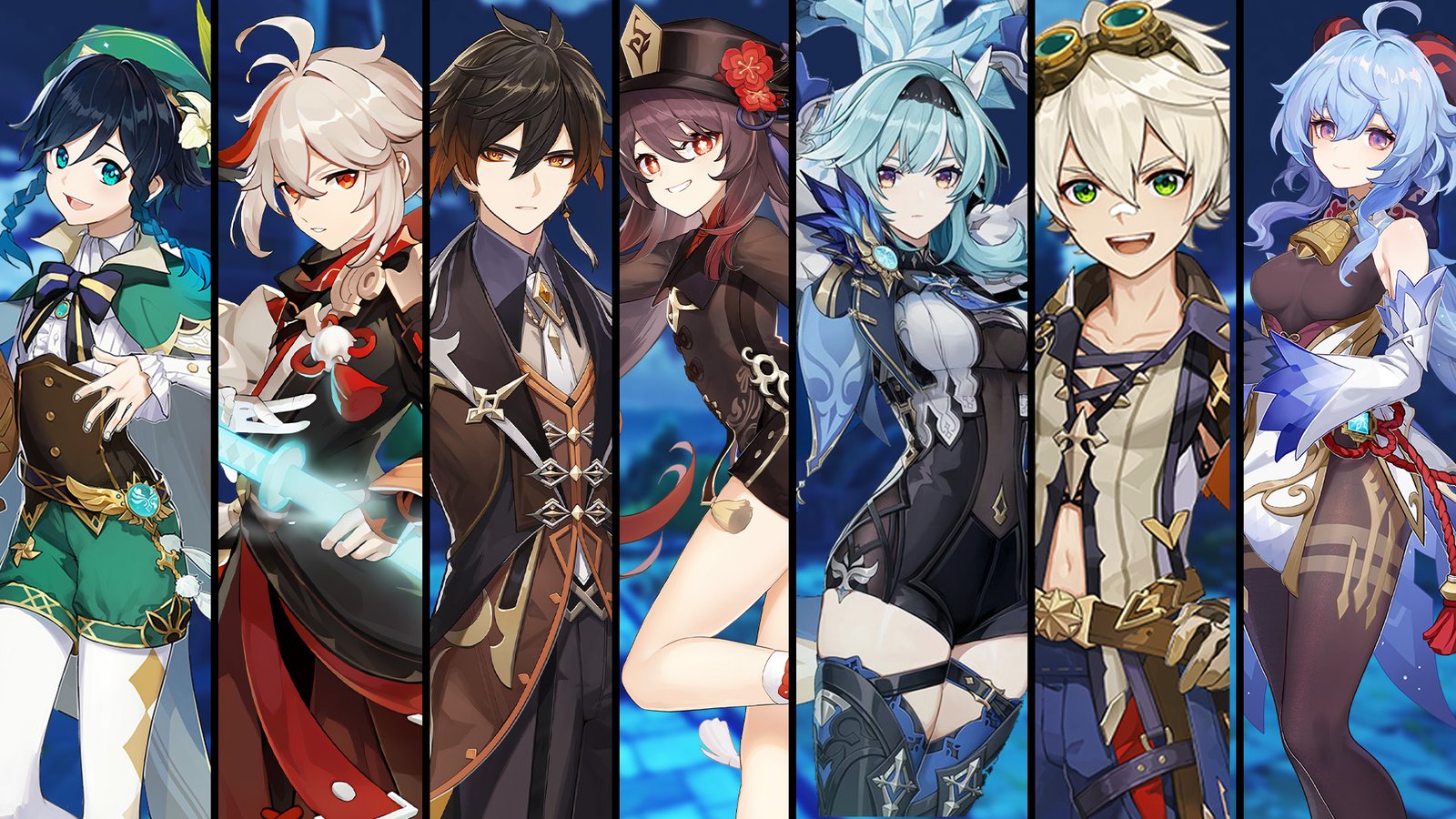 How have you been? I hope everyone is doing great in their life. Here in this article, you are going to read about the best characters in Genshin Impact. If you’re not aware of this game so before starting the main article let’s get to know something about the game Genshin Impact. An action role-playing game Genshin Impact was developed by a Chinese developer named miHoYo. Some of the platforms for the game are Android, iOS, Nintendo Switch, Microsoft Windows, PlayStation 4, and PlayStation 5. This game can be played in both single-player and multiplayer. On Android, iOS, Windows, and PS4 game was released on September 28, 2020, whereas the PlayStation 5 game was released on April 28, 2021. Now let’s start this article then. Keep scrolling folks to know about the best characters in Genshin Impact!

Here in the list of 15 best characters in Genshin Impact, the first one is Bennett. He is a medium male. He was a young orphan when he was discovered by an elderly adventurer. Then he was further raised in Mondstadt’s Adventurers’ Guild. He was the only member remaining in Benny’s Adventure Team as everyone else left. He uses a sword as a weapon and has a vision of Pyro. Besides all these, he also has an elemental burst Fantastic Voyage by which he can cause pyro damage to all the enemies near him by jumping into the air.

The second character in the list is Xingqiu, in Genshin Impact he is a playable Hydro character. He is also a second son of the Guild Manager of Feiyun Commerce Guild. Despite all these, of the Guhua Clan’s arts, he is a self-proclaimed practitioner. He has a constellation that provides him an additional debuff with this it can also multiply the number of swords released by Elemental Burst of Xingqiu. The primary use of the Elemental skill of Xingqiu is to use it as a Battery for the Elemental Burst of Xingqiu.

The third character in the list is a medium female named Ganyu. She is well known to be Qixing’s Corporate Secretary. Currently, she is in a special emissary serving as Lady Ningguang. During the story quest, she shared how unwelcome she feels in Liyue as she is a half-adept and a half-human. She is quite different from other DPS characters as without relying on Elemental Skill and Burst she has the ability to deal with tons of damage.

The fourth character in the list is a medium mail named Zhongli. In Liyue, Zhongli is mostly known as a mysterious consultant in the Wangsheng Funeral. He works for Hu Tao. The mortal form of Zhongli is quite similar to Venti. Earlier both were Gods, but now they live as commoners. The jade shield of Zhongli provides him with a good shield. Even if you are the weakest character in the game, a jade shield can still protect you. He is a five-star Geo character and also uses Polearm as a weapon. With his Elemental Burst, he is able to petrify enemies.

The fifth character in the list is a medium male named Venti. In Genshin Impact, he is a playable Anemo character. He is well known as an Unknown Bard and he suddenly appeared in Mondstadt. In his leisure time, he even loves to enjoy drinking, to perform in front of people he even plays his lyre and asks for apples in return. With his Elemental Skill, he also serves as a battery for the team, which releases multiple energy particles once it hits enemies.

The sixth best character in the list is a medium female named Hu Tao. In Genshin Impact, she is a playable Pyro character. Hu Tao is the 77th Director of Wangsheng Funeral Parlor and she even accepts and respects death as a natural thing in life. She is a five-star Pyro character with high crit damage and decent HP and defense and a range of strong attacks. She is even able to give a powerful and consistent Crowd Control to the team which lasts for a long time.

The seventh character of the game is a medium female named Mona. Mona is well known as the Astrologist Mona Megistus. Mona can easily work as either a Sub-DPS or Main DPS of the team. She has a versatile kit that helps players to build her on what they need for the team. Mona can deal high damage by herself and she even works with other supports. Thanks to her consistent Hydro application, she is also a great enabler.

The eighth best character of the game is a short girl named Diona. The real name of Diona is Diona Kätzlein. She is a bartender at Cat’s Tavern. Despite this, she thinks that alcohol always reveals the bad side of people. Besides being a bartender, she makes disgusting alcoholic mixes so that everyone starts to hate drinking alcohol. The strength of Diona lies in her support abilities. She acts as a shield and healing to her team as well. Diona can fit in any team competition.

The ninth character of the game is a Tall Male named Diluc. The real name of Diluc is Diluc Ragnvindr. He is a part of one of the noble houses of Mondstadt’s proud Ragnvindr Clan. He is considered one of the wealthiest and most influential people in the city and a current owner of the Dawn Winery. Because of his consistent and beginner-friendly playstyle, he is one of the best Pyro main DPS of the game. His damage exponentially increases by his Elemental Skill and Burst.

The tenth character in the list is a Short Female named Qiqi. In Genshin Impact, she is a playable Cryo character. In Liyue, Qiqi is an employee of the Bubu Pharmacy, the finest pharmacy. During the story quest, you must have seen that traveler visit Bubu Pharmacy to ask for information about certain issues. In the current roster of the characters, she is among the best healers. With no problems, she can heal the whole team.

The eleventh character in this list is a tall female named Jean. The real name of Jean is Jean Gunnhildr. In Genshin Impact, she is a playable Anemo character. She is a descendant of the prestigious Gunnhildr Clan, older sister of Barbara, and daughter of Seamus Pegg and Frederica Gunnhildr. Jean easily fits in any team competition. Burst Healing of Jean is one of the most effective in the game. She even has a unique blend of DPS character and support.

The twelfth character in the list is a short female named Klee. Klee is a daughter of the author of the famous Teyvat Travel Guide and a highly renowned adventurer named Alice. In Genshin Impact, she is a playable Pyro character. She has the ability to create her explosives which can blow up massive buildings and areas and because of this ability, she was given the title of Spark Knight and also considered as one of the strongest knights. She is also a Pyro DPS.

The thirteenth best character in the list of the game is a Tall Male named Tartaglia. Ajax is well known by the name Tartaglia and Childe. In Genshin Impact, he is a playable Hydro character and one of the weekly bosses. He is also an 11th member of the Fatui Harbingers. Since he was 14 years old, he has been on the battlefield. He is an enabler and Hydro carry. The riptide of Childe allows him to deal with multiple hits.

The fourteenth character in the list is a medium female named Barbara. Her full name is Barbara Pegg. In Genshin Impact, a playable Hydro character. As the Deaconess of the Favonius Church, she is quite dedicated to her job. She is also beloved by the whole of Mondstadt. You won’t believe that Jean and Barbara are sisters even though they have different surnames. Though she is a Catalyst user, in addition to her Elemental Skill she applies Hydro to enemies with both her charged attacks and normal.

Last but not least fifteenth character of this list is a medium female named Keqing. In Genshin Impact, she is a playable Electro character. She is quite doubtful towards Gods and she even disliked the idea of relying too much on Gods. However, she believes that Liyue should be protected by its own people. She has quite appreciable damage potential.

I hope you had a great time reading this article about the best characters in Genshin Impact. We would love to listen to your reviews so don’t forget to leave your reviews in the comment section. Stay tuned with ThePoptimes. Have a cheerful day ahead folks!