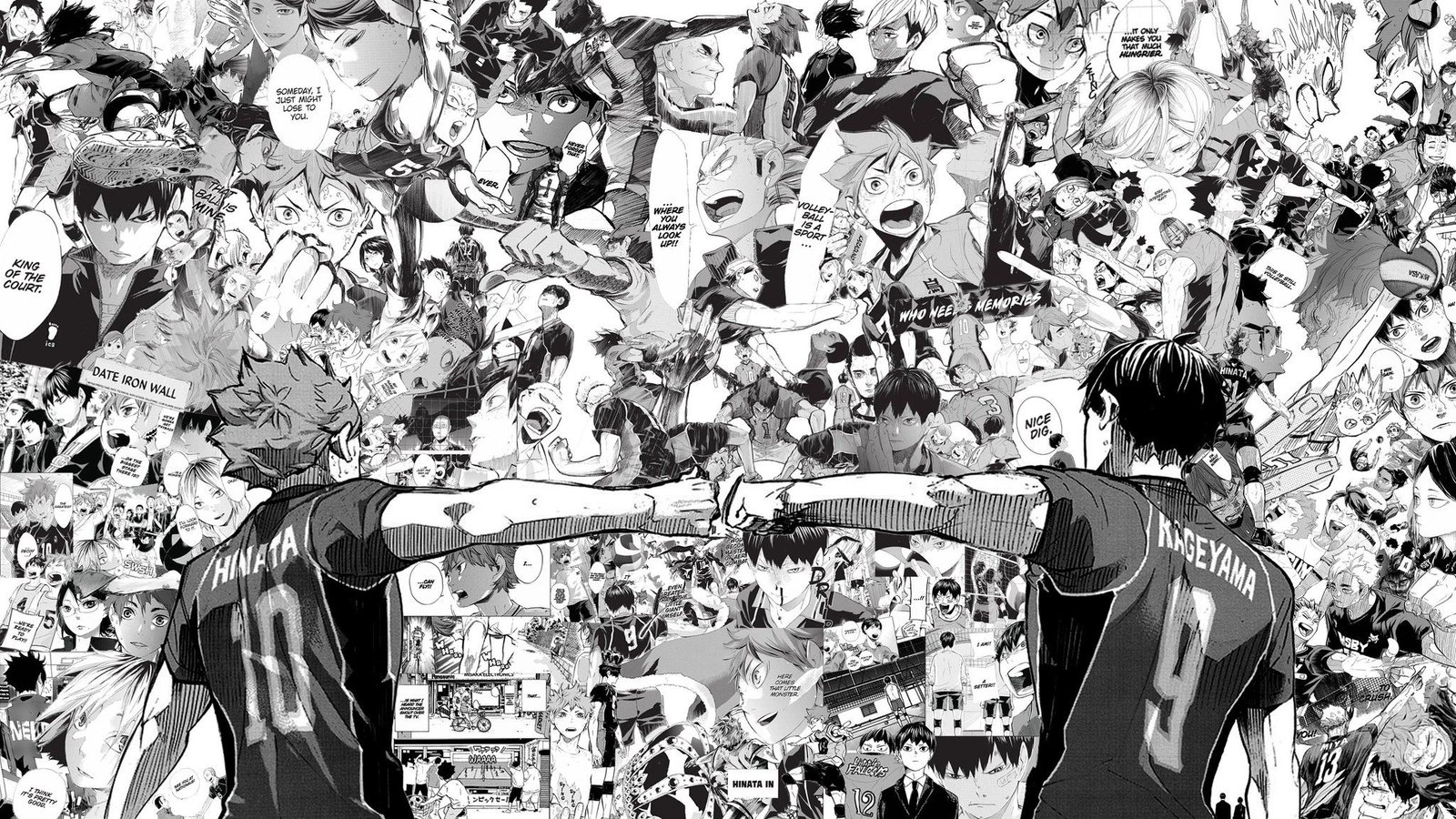 In this article, we will give a detailed explanation of the chapter that is named final boss which addresses the match between Black Jackals vs Schwiden Adlers.

“The Final Boss” is the 378th chapter in the Haikyu!! series, written and drawn by Haruichi Furudate. It appeared in the 4th and 5th issues of Weekly Shonen Jump’s 2020 series.

Hinata and Kageyama are ready to play their first official match since middle school for their respective professional teams, the MSBY Black Jackals and the Schwiden Adlers. Many familiar faces from high school, who have since gone their ways, assemble to watch the match at the Kamei Arena Sendai gymnasium.

Many familiar figures from the past, including our Karasuno club members, appear in this chapter. Kiyoko and Tanaka have married, and coach Ukai and professor Takeda have arrived with the new Karasuno club. Members of the jackals and alders are to be depicted having fun in the changing rooms with no pressure. This brings back memories for the audience, who are moved to tears. But, all memories aside, the bout between The Black Jackals and Schweden Alders starts with Hinata and Kageyama shaking hands before the main event.

Hinata joined the MBSY Black Jackals as an official member in November 2018. Hinata and Atsumu watch a tape of Heitor’s beach volleyball match and giggle at Kageyama’s embarrassing curry ad on the bus trip to their next match. Soon after, the squad arrives at Kamei Arena Sendai, the site of a V.League Division 1 match.

Tsukishima is joined in the stands by Yamaguchi and Yachi. Inside the gymnasium, Daichi, Sugawara, and Asahi have also rejoined. Despite their separation and varied jobs, the three laugh about like old friends and recollect the vivid memories of their first trip to the championships years ago. Sugawara exclaims his excitement for the impending encounter. Hashimi is excited to face Hinata again in the Adlers’ changing room.

The stadium is loaded with delightful fragrances and diverse food vendors. Some newer followers, unaware that Atsumu has a twin, are perplexed to discover Osamu selling onigiri until a senior fan clears them up. When Yamaguchi goes to buy onigiri, Osamu and Yamaguchi recognize each other. The two casually discuss not missing the Schweden Adlers vs. MSBY Black Jackals match, noting that it’s the first time Hinata and Kageyama have played each other in an official match since middle school. Meanwhile, Hinata and Kageyama collide in the corridor outside the men’s bathroom.

Both sides feature extremely driven players, with an equal mix of Genius setters (Kageyama Tobio and Miya Atsum), Top-Tier Aces (Bokuto Kotaro and Ushijima Wakatoshi), and our Little Giants (Hinata Shoyo and Hoshiumi Korai). Everyone will be on the edge of their seats with this setup.

Kageyama’s monstrous serve kicks off the contest. Hinata leaps in and receives it just as everyone thought it was a guaranteed point, then goes on to smash a high spike to demonstrate his presence. Because it was his maiden bout, everyone in the arena was taken aback. Hinata then goes on to show off his ability by blocking, receiving and hitting faster spikes. Not to mention, our brilliant setter Kageyama finds ways to put pressure on the Jackals, making the game more intriguing than normal. However, all dreams are dashed as the Jackals win the first set (25-20).

Kageyama, Romero, Ushijima, and Hoshiumi turn the game around in the second set. The Adlers bring their A-game with Romero as their headliner because of his expertise. Hoshiumi demonstrates his actual speed and abilities, while Ushijima demonstrates tremendous spiking power. Kageyama overcomes his setback in the previous set and outperforms the rest. The Adlers eventually win the second set (21-25).

The third set begins with an incredible start for The Adlers, who arrive prepared after observing The Jackals. However, Atsumu alters the situation by gaining the lead with his serves. The contest frequently takes unexpected turns. Later, all eyes are drawn to Bokuto’s extraordinary straight strike. He recalls how thankful he feels to have been hurled. Later in the novel, Hoshiumi and his height are mentioned as not being an issue for volleyball. The score is now 20-19 in favor of The Jackals.

READ ALSO: Can Berserk Go on Without Kentaro Miura?

The Decider match ended on a cliffhanger, with The Jackals leading. Hinata has received the greatest attention in terms of the narrative. The Adlers have Hoshiumi, who has yet to reach his full ability, and Kageyama, who is doing everything he can to compete with his boyhood rival Hinata and the Genius setter Atsumu Miya. Haikyuu has always surprised its audience by providing a variety of surprising match finishes. However, because this is the series’ ‘Final Arc,’ the main protagonist’s side is expected to triumph. It would be a huge disappointment if Hinata lost in the final match. So, taking numerous angles into account, it is The Black that will win the match.

The Characters in The Chapter

Where to Read This Chapter?

As the manga has been licensed by Viz Media, You can find English translations on the Viz media website. You can also find the Japanese version on Mnagaplus with an authentic version. As it takes some time to get the chapters in the English version many fans prefer to look at raw scans and also the Japanese versions out of curiosity. Both the mentioned sites are legal and it is recommended for the fans to read the manga on legal and licensed sites.

Haruichi Furudate is the author and illustrator of the shonen sports manga series Haiky!! On January 8, 2011, it debuted as a one-shot in Jump NEXT! magazine, followed by the second issue in Weekly Shonen Jump magazine on April 25, 2011. The manga was serialized in Weekly Shonen Jump magazine from February 20, 2012, to July 20, 2020, and was republished in a series of tank-on volumes. On July 5, 2016, Viz Media began releasing the series in English. Production I.G has adapted Haiky!! into an anime series, as well as stage plays, video games, light novels, a trading card game, and other media.

Haiku!! was serialized in Shueisha’s Weekly Shonen Jump magazine, with a new chapter released each week (with occasional pauses) beginning with chapter one in issues 21–22 2012 on February 20, 2012, and finishing with chapter 402 in issues #33–34 2020 on July 20, 2020. On June 4, 2012, the chapters were reissued in the tank in volumes, beginning with Hinata and Kageyama. Viz Media announced at New York Comic-Con 2015 that they will be licensing Haiky!! for publishing in English, and the first volume was released on July 5, 2016. Individual chapters are also accessible through the Shonen Jump membership program on the Viz Media website. The most recent three chapters are accessible in English on Shueisha’s Manga Plus platform.

Shoyo Hinata, a junior high school student, becomes enamored with volleyball after seeing Karasuno High School compete in Nationals on TV. Hinata, who is diminutive in stature, is inspired by Karasuno’s little but talented wing spiker, dubbed “The Little Giant” by pundits. Hinata is athletic and has an amazing vertical jump despite her inexperience. He joins his school’s volleyball club, only to discover that he is the only member, requiring him to spend the next two years convincing other pupils to assist him in practice.

Hinata’s buddies agree to join the club in his third and final year of junior high so that he may compete in a tournament. In their first official game, they are crushed by the tournament favorites, who feature third-year Tobio Kageyama, a prodigy setter called ‘The King of the Court’ for both his talent and his harsh play style. The two ignite a brief rivalry, and following the game, Hinata promises to defeat Kageyama in high school.

Hinata studies and gets admitted to Karasuno, the same high school where the “Little Giant” performed, but she is surprised to learn that Kageyama has also chosen Karasuno. Karasuno is shown to have lost its status as a powerful school during the era of the Little Giant, and is now referred to by other area teams as ‘The Wingless Crows.’  However, by combining Kageyama’s brilliant setting talents with Hinata’s exceptional agility, the combination develops an explosive new volleyball technique and an unexpected but formidable setter-spiker alliance. Along the way, Hinata and Kageyama encourage each other to realize their full potential, and Hinata forms bonds with his first true team, kicking off Karasuno’s road of redemption to recover their reputation and make it to the nationals.

This anime and manga have a huge number of fans. Once you watch the anime I am sure you will be curious enough to start reading the manga. Even though manga alone had so many fans but it is undeniable that anime also added a huge number of people to the fandom.