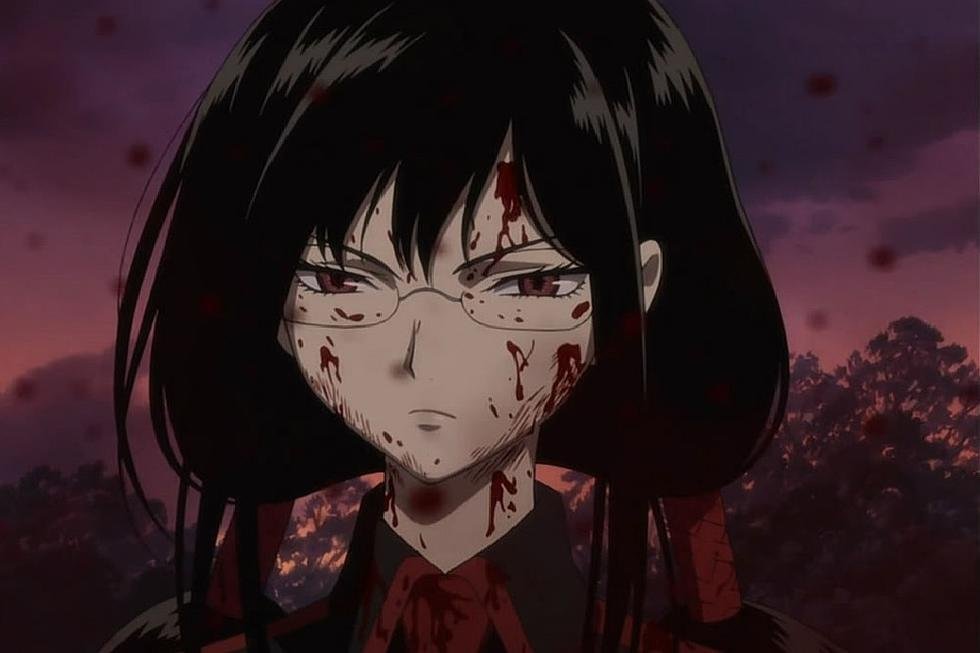 Blood C is the second installment in the blood series. The horror fantasy anime has in total of about 12 episodes and was released back in 2011. The anime has a shabby plot with predictable turns and twists. Characters aren’t that distinct so viewers can easily forget about them soon after watching the series. The action seems pretty acceptable but the narrative and the story are sloppy making it a boring ride for viewers.

Following cliché framework wrapped up in a shabby world set up and sometimes making no sense it really pulls down the bright side put on by the combat. The plot just thickens with more and more unanswered questions piling up which might causes the viewer to lose focus from the core plot. The background characters seem lifeless and their actions, the reason behind action almost makes no sense. The plot progression isn’t progressive at all and seems repetitive at some points.

The Blood franchise has a lot of installments. The movie Blood-C: The Last Dark is the sequel of the anime series Blood-C. However, no announcements have been made by the production company of the franchise so far so it is unlikely as of now to see a second season of the anime. It has been more than 10 years and so the chances for the second installment to come up are almost dead.

The plot provides us with a twisted story. The story is based in a world filled with complexity. The duality aspect of existence is portrayed in here wrapped up in fantasy- action theme. We get to follow the life of one Saya Kisaragi. Now Saya at first seems like a normal girl from appearance. During the day time she attends school, and spends time with her friends and all. She appears to be leading a subtle peaceful life like any other ordinary person outside of harm’s way. She lives in a village and often comes out to be a dense person when it comes down to matters relating to relationships and boys. However, things take a drastic shift when the actual scenario of Saya gets revealed. The dense, normal life-leading village girl Saya is also a slayer of monsters at night time.

She is a skilled warrior and has received the proper training to deal with monsters and eradicate the threat they pose to her village. She has sworn to protect her village and she won’t hesitate to go to any extent to fulfill her duty. Whenever any kind of monster intends to disturb the quiet peaceful life of Saya’s village gets obliterated by Saya. However, her determination, and beliefs get a bit unstable after a certain incident. In that incident, Saya came across a monster whom Saya at first considered to be just another monster seeking to cause trouble in the village but the situation changed when Saya comes to know about a broken covenant as she overheard the monster talking about it.

Before this incident she didn’t even had a simple clue regarding anything like that so the information of existence of something like that and more so knowing that from a monster had a certain degree of impact on Saya. She uses a Ceremonial sword that was bestowed upon her by her father. The sword is supposedly used to perform rituals and other stuff with sacred entity. That very sword is used by Saya to eradicate the threat of monsters. After learning about the broken covenant, she was in a middle of a dilemma.

While she was trying to make heads and tails of the entire situation she encounters a dog. The dog looked extremely strange and had a mysterious aura to it. The dog had the capability talk and out of curiosity, it asked Saya that whom did she make the promise to. The promise of protecting her village at any cost. The dog was extremely curious to see what will befall is she fails to keep the promise. Saya gets tormented with incomprehensible visions and sets out to reach the bottom of the actual truth that is deeply hidden in her village. We get to follow the journey of Saya as she navigates through the path to seek the truth and see the hidden secrets that surrounds her. Even the character design isn’t that satisfactory. The animation quality is nothing to be put under the spotlight.

Saya Kisaragi- Nana Mizuki (also known as Nana Kondou), from Niihama, Ehime, Japan provides the Japanese voice of Saya Kisaragi in Blood C. She is highly regarded by her other Seyiuus as well for her remarkable work.

“Dog”- Jun Fukuyama from Fukuyama, Osaka Prefecture, Japan provides the Japanese voice for the strange dog in the anime Blood C. His birthday is on Nov 26, 1978. He is an extremely talented Seyiuu and gas won a lot of awards. One of his most remarkable role is as Koro-Sensei from Assassination Classroom.

It has an IMDB rating of 6. out of 10. Here is a deep analysis of the ratings for this anime series.

1. Are the creators ready for Blood-C Season 2?

We cannot say anything unless and until we have an official announcement.

It is an action thriller and a fantasy series.

3. Will we have any trailer for the second season of Blood-C?

This will only be possible after the renewal of the series which seems impossible now.

4. What is the total number of episodes of Blood-C?

The total number of episodes is 12.

5. Where to watch Blood-C online?

You can watch the anime on Hulu.

It has been more than 10 years and so the chances for the second installment to come up are almost dead.