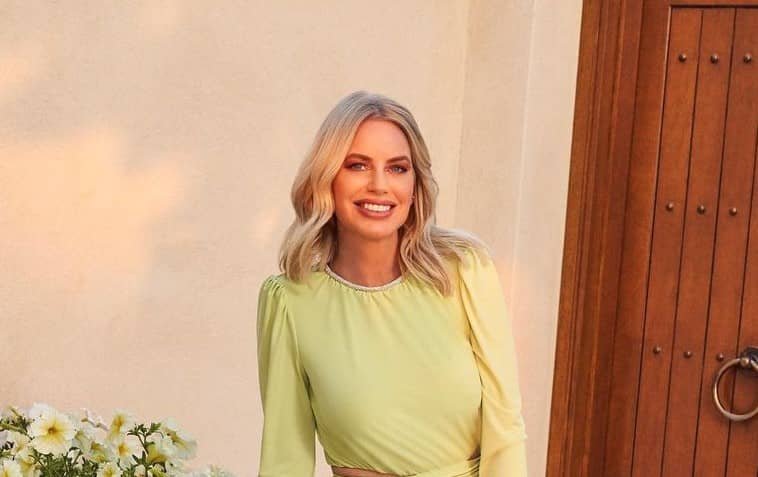 Caroline Stanbury is a popular TV personality, well-known for her role in Ladies of London and The real housewives of Dubai. She is originally from the UK, however, she currently lives with her husband and children in Dubai. Stanbury is liked by many fans of the show around the world. And aside from her reality shows, she is also an entrepreneur with her own company and also has a podcast of her own.

Read on below to find out Caroline Stanbury’s Net worth value. And if you want to keep yourself updated on your favorite celeb then do not forget to follow @poptimes.

With her reality shows, her own company, and others, Stanbury’s estimated net worth is 30 million dollars. She is rich and has a luxurious life in Dubai with her family.

She was born on 28 April 1976 in London, United Kingdom. Her parents are Anthony and Elizabeth Stanbury. Caroline is from a wealthy family in England. Her father is a venture capitalist, he worked as the managing director of a luxury fashion group while her mother ran a clothing business and is the great-granddaughter of a wealthy baron. Therefore, it is clear that Caroline since young has known wealth and is herself a millionaire now. Caroline has three other siblings.

Stanbury’s TV career as a reality show star began with her role in an American show called ‘Ladies of London’. The show amassed a great number of fans following even though it got canceled after its third season. The show ran from 2014-2017. Apart from that, Caroline is also an entrepreneur, she has worked as a stylist for high-end clients and started her own company, a luxury gift shop called ‘Gift Library’ which unfortunately closed in 2015. Additionally, she also ran a furniture line for a brief while. Caroline also got into a lawsuit when her business partner accused Caroline of transferring business assets into her private account, but the case was won by Caroline.

As for Caroline Stanbury‘s Marriage life, she was married to a financier, Cem Habib at the start of her career during the ‘Ladies of London’ days, the marriage lasted till 2019 with three kids. They got divorced and then separated.  Her next marriage or the current one is with a former Real Madrid soccer player, Sergio Carrillo who is 20 years younger than her. And they are living a happy life together in Dubai with Stanbury’s 3 kids from her former marriage. She has mentioned that Carrillo, her new hubby desperately wants a kid, however, Caroline herself has issues with pregnancy now due to her age. She has ‘frozen her eggs’ and has decided to give birth to their child through surrogacy which Carrillo is strictly against. He does not want anyone else to bear the baby and is adamant about it. Caroline says that this is due to him being much younger and therefore failing to see the real complexity of the issue. Carrallo does need to study biology a bit more it seems. Nonetheless, we hope that Caroline and Carrillo can have their baby soon and have a great family together.

Currently, she hosts a podcast called ‘Dead not divorced’ and also runs a successful luxury brand she also launched a shoe collection recently. Stanbury shared that her life has changed a whole since the start of her career, these days her life has become less stressful and easier even though she works more these days and is busier than before however, everything she does, does not give unnecessary pressure on her like the ones that used to before. She said that her life lot less regimented. Back in the UK, she said that people were taught to not show off their wealth in any form but now in Dubai, it is much more different as people freely show off their wealth and live luxurious lifestyles if they want to and can afford it. This has made her much happier. Her husband also mentioned that Dubai was a great place to live at present. It was excellent in terms of safety, as they could easily put out their valuables for the show still they could be sure that no one would steal them. On a recent trip to Greece with the family, their hotel room had been broken into and lots of stuff got stolen. Thankfully no one got hurt, this made both Stanbury and her husband realize how safe Dubai was.

As her life is going smoothly and successfully, we hope to see more of Caroline in the future with her roles in Reality TV shows, etc.