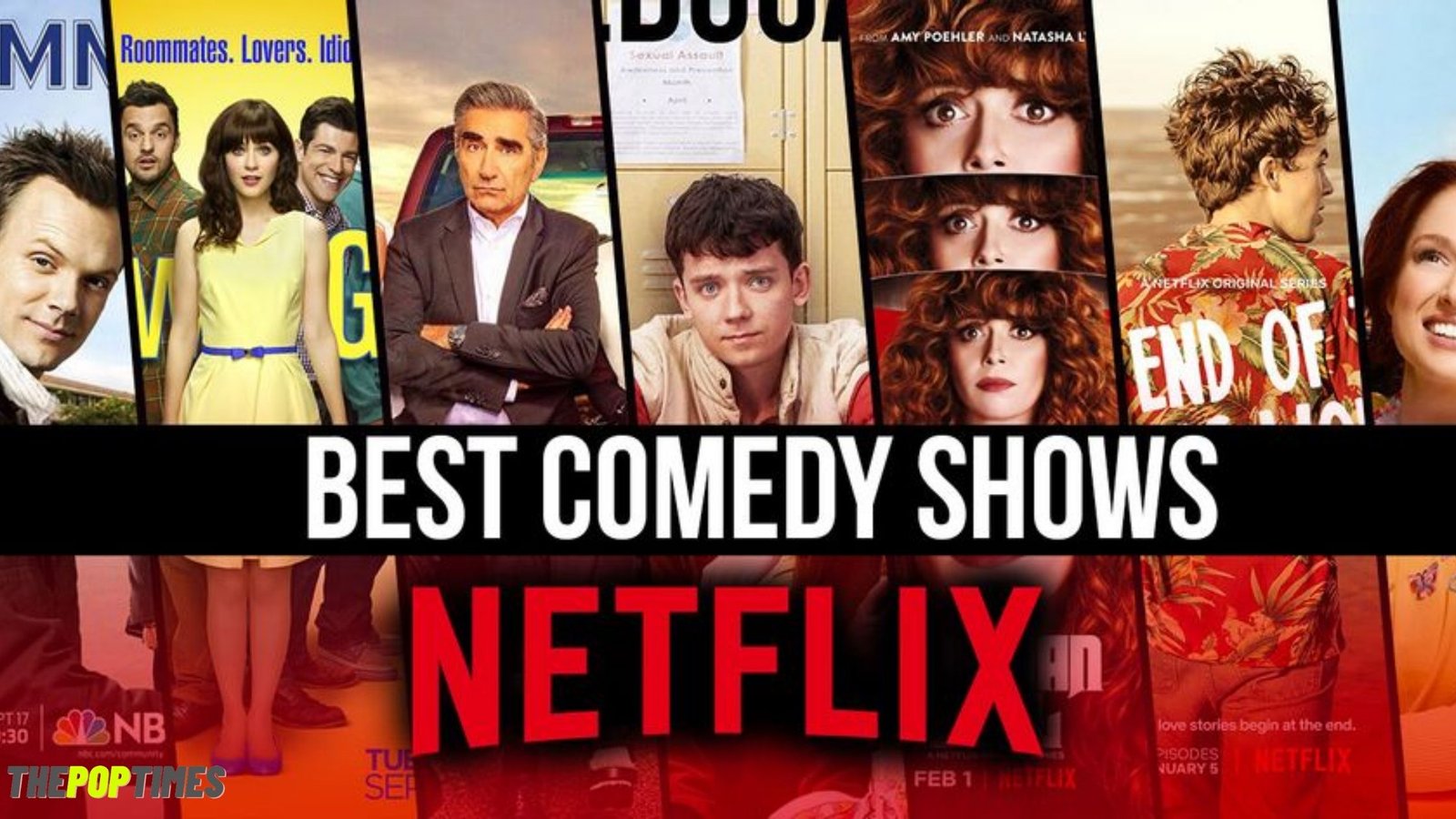 OTT platforms came into the limelight when the pandemic made people stay at home. But, Netflix was still popular for its shows and had many viewers across the world. We saw much amazing content that premiered on Netflix. One can find series and shows of almost every genre. One such genre that has made the platform content-rich is a dark comedy. Several dark comedy series are available on it and people are fond of watching them. Browsing these shows individually and then picking the best among them can create a mess. So, here we have listed the 12 best dark comedy show on Netflix that you must try. Before proceeding, let us know briefly about dark comedy.

What Is Dark Comedy?

Often, people consider comedy and dark comedy as the same genre but it is not so. We can’t say that they are the same but rather similar in another way. After hearing the word, comedy, we think of laughter and fun because of the funny scenes and concepts of a film. Dark comedy, also known as Black comedy, is a style of comedy that takes into account those topics that are serious or considered taboo. This is used to discuss the topic by creating humor and serious thought among the audience.

This film premiered worldwide on 7th September 2012. The film is starring Sam Rockwell, Collins Farrell, Tom Waits, Christopher Walken, Woody Harrelson, and other actors in supporting roles. It is the story of a writer who wants to finish his screenplay. But the problem is, he has a title but not a story. Two of his friends, Billy and Hans kidnap the dogs of rich people and then collect the rewards from them after they return the dogs safely.

This is how they earn their livelihood. As usual, they stole a dog but this time it was the beloved pet of a gangster Charlie Costello. The events that happened further were used as the content of Marty’s screenplay. Seven psychopaths are directed and written by Martin McDonagh. Critics gave positive reviews and this film was loved by the people.

Death At A Funeral

Directed by Neil Labute, Death At A Funeral was released on 16th April 2010. The cast members of the film are Chris Rock, Danny Glover, Martin Lawrence, Peter Dinklage, James Marsden, Regina Hall, and several others. Whenever we listen that somebody is preparing for a person’s funeral, we feel sorry and sad for him. When Aaron’s father dies and everyone gathers for the mourning, many problems arise. The siblings have their own fights while a stranger has a big secret with him that creates a total mess and therefore, Aaron is trying to pay a proper memorial to his late father.4

Being a critically acclaimed film, American Hustle has received three BAFTA Awards. It marks its release on 13th December 2013 and the stars Christian Bale, Amy Adams, Jennifer Lawrence, Bradley Cooper, Jeremy Renner, and Louis C.K. Irving (Christian Bale) and Sydney, (Amy Adams) are the con artists who work for an FBI agent. But they have been forced to work for that agent. He uses both of them to perform a sting operation which ultimately makes them step into the world of mafias. American Hustle is written by Eric Warren Singer and David O. Russell and the director is David O. Russell.

The Lobster is a dystopian film and also a black comedy that was released on 16th October 2015 in the United Kingdom and Ireland. It is accessible in 2 different languages, English and French. Colin Farrell, Jessica Barden, Olivia Colman, and Rachel Weisz are the lead characters. This movie has been appreciated by critics, and therefore, it received nominations at the Academy Awards for Best Original Screenplay.

The story is about the times when single people are sent to a hotel where they need to find a partner. But, there’s a twist here. For this, they only have 45 days after which that person would transform into an animal of their choice. David (Colin Farrell) is in that hotel after his wife went away leaving him after 11 years of marriage. If he fails in finding a partner, he would be a lobster.

READ MORE: Movies And Shows Like Friday Night Lights You Must Watch!

This South Korean TV series is the latest show that has been released on Netflix recently. Comprising 20 episodes, it was released on 20th February 2021. Starring one of the famous actors of South Korea Song Joong-ki as Vincenzo Cassano, the series was also aired on tvN. Apart from Song Joong-ki, Jeon Yeo-been, Kim Yeo-Jin, Ok Taec-yeon, and Kwak Dong-Yeon are part of the series. The story is about an Italian mafia. He returns to Korea but his intentions change due to which he has several enemies. Kim Hee-won and Park Jae-bum have served as the director and writer respectively.

The House Of Flowers

It is a Mexican TV series, created by Manolo Caro. It is a quite long series as it has three seasons that contribute to 34 episodes in total. Starting from 2018, when the first season premiered, the next two installments dropped in 2019 and 2020 accordingly. Verónica Castro, Paco León, Cecilia Suárez, Maria León, Arturo Rios, and Isela Vega are the star cast of The House Of Flowers. The story revolves around a Mexican dysfunctional family that runs a flower shop.

I Am Not Okay With This

This coming-of-age American TV series aired on Netflix in 2020 on 26th February. It is based on the comic book written by Charles Forsman. Because of the COVID-19 pandemic, the series faced cancellation after the first season. I Am Not Okay With This is about a teenager who deals with situations related to her school and family. The series only has 7 episodes with a running time of about 19 to 28 minutes. It is directed by Jonathan Entwistle and the producers are Buddy Enright and Rand Geiger.

It is an American TV series that stars Zoe Levin, Brendan Scannell, Nana Mensah, Micah Stick, and Theo Stockman. Recently, its second season made its way to Netflix. The first season arrived on 24 April 2019 while the latest season dropped on 27th January 2021. Created and directed by Rightor Doyle, Bonding has 15 episodes altogether. It has received an IMDb rating of 7.2 out of 10.

Starring Christina Applegate, James Marsden, Linda Cardellini, Sam McCarthy, and Max Jenkins, Dead to Me is an American television series that appeared on the screen before the people on 3rd May 2019. After the renewal, its second season was released on 8th May 2020. The show focuses on the friendship that builds up between Jen (Christina Applegate) and Judy ( Linda Cardellini). Jen is a widow who lost her husband in an accident while Judy is dealing with her problem as she and her fiance faced a breakup. Both of them are in different circumstances yet the story gradually becomes intense.

Ben Stiller has served as the director of The Cable Guy which was released on 14th June 1996. Starring Jim Carrey as Cable Guy aka Chip, Leslie Mann as Robin Harris, and Matthew Broderick in the role of Steven joined the cast of this film. Steven moves into a new apartment after his girlfriend made him leave the house. In the new apartment, he gives money to the cable guy for free movies. Chip wants Steven to be his friend but he is not interested. After this, the story takes a different turn.

READ MORE: 25 Movies Like Midsommar: Which One Will You Prefer To Watch?

People have seen many political satire films and series and The Dictator is one of them. After releasing on 16th May 2012, it received mixed reviews. The film has Baren Cohen and Ben Kingsley playing the role of Aladeen and Tamir respectively. Further, the cast includes Anna Faris and Jason Mantzoukas. The storyline of this film revolves around a dictator Aladeen, who visits New York but then gets kidnapped by a person who was hired by his uncle, Tamir. The Dictator was directed by Larry Charles.

These are some of the dark comedy films and series that are available on Netflix for you to watch. If you have any suggestions other than the mentioned series, do let us know in the comments section.

Insatiable is an American drama that falls in the category of dark comedy. In July 2014 there was an article written by Jeff Chu and published in the New York Times magazine. It was titled, The Pageant King of Alabama. This TV series is based on this article itself and it was on 10th August 2018 when the first season made its way on Netflix. Later on, the creator of the show, Lauren Gussis, renewed this series for another installment and after TWO favorable seasons, the streaming platform Netflix announced an official cancellation on 17th February 2020.

ALSO READ: Shows Like Sexify That Will Entertain You Greatly!