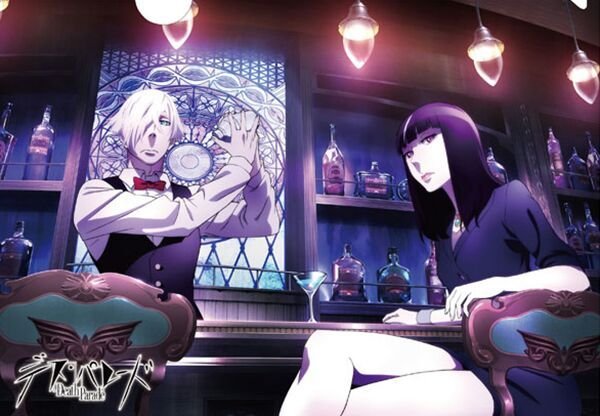 A twisted dark tale that explores the different aspects of life in a unique way. We get to take deep dive into different people the life they have lead and what impact does death can have on one and the ones surrounding them. Music that can move your toes to dazzling animation and color choices sets the perfect environment for the theme and the plot. The plot setup is extremely unique and fresh out of the box that can hardly get old ever.

The recently released widely popular game Cyberpunk 2077 produced by CD Project Red has an in-game bar (accessible by player) named “Afterlife” which can be considered as a reference to this anime. The anime was released back in 2015 and has only one season as of now with 12 episodes. The twists and turns, secrets yet to be revealed, the character development aspect forms the backbone of the series. It has only been one season till now. Here, in this article, we are going to discuss Death Parade Season 2.

There has been no news regarding the release of a second season of the anime. So as of yet, nothing can be said however fans are eagerly waiting for a new installment so if the creators respond to the call for a second season there might be a chance for revival.

A dark twisted tale filled with extravagant music and mesmerizing visuals are what Death Parade brings to us. An intriguing plot that might push the boundaries of one’s imagination. People often wonder what comes after death. What happens when the soul leaves its physical bond leaving behind just an empty shell on the land of the living. Nobody knows the answer and the only way to know what lies behind the gates of death is by experiencing death only. Some people consider that there is an afterlife, or the souls go to heaven or hell depending on the deeds they have done while they were alive, different ideas are out there regarding this topic but none of them is confirmed. The anime Death Parade, took its liberty to portray an unconventional setting that a person faces after death. The anime shows after death every soul gets only two options either to get reincarnated and to live another life, or get lost in the realm of obscurity. And to determine their fate a bar stands in their way to justify.

The bar is called Quindecim which is located on the fifteenth floor and it is not just any other bar although it looks like a regular bar it has a lot of things going under its sleeves. In the world of Death Parade, after falling in the hands of death, the person needs to partake in various games or activities in the bar and whether the person will be granted an afterlife or will be lost in oblivion solely depends upon the performance of the person in those assigned games. Decim who is the main bartender of the bar Quindecim guides them with the rules and regulations of the practice in the bar. Decim is also the arbiter of the afterlife and he is accompanied by the other employees of the Quindecim bar such as Nona, Kurokami, Clavis, Ginti, and others. Decim is a silent type of guy who remains calm and composed most of the time. Decim is assisted by Kurokami who happens to have an ill temper and most of the time she losses her composure. Unlike Decim her emotions are vivid and she expresses herself without holding back or anything. The entire Arbitrar system is managed by Nona herself.

She is also the bartender of the nineteenth-floor bar Nona Ginta. She has been working as the manager for about eighty-seven years now. And Decim, Clavis, Ginti, and all other arbiters work under her. Her appearance might be deceiving since she looks too young for her age however it should be kept in mind that she is an intelligent and extremely experienced arbiter and she knows how to deal with any issue. She guides those who work under her and even helps them with their mistakes. The story revolves around the bar of Quindecim and the workers in there especially that of Decim’s. How different arbiters interact with different departed people, how the departed people perform in different games of the bar and what different fates they face. It also revolves on what kind of different people the arbiter encounters and the stories of their life and how it impacts different arbiters.

Death Parade Season 2 has no trailer or visual of any sort available as of now. The anime is available on Netflix to watch.

Must Read– Will There Be Restaurant To Another World Season 2?