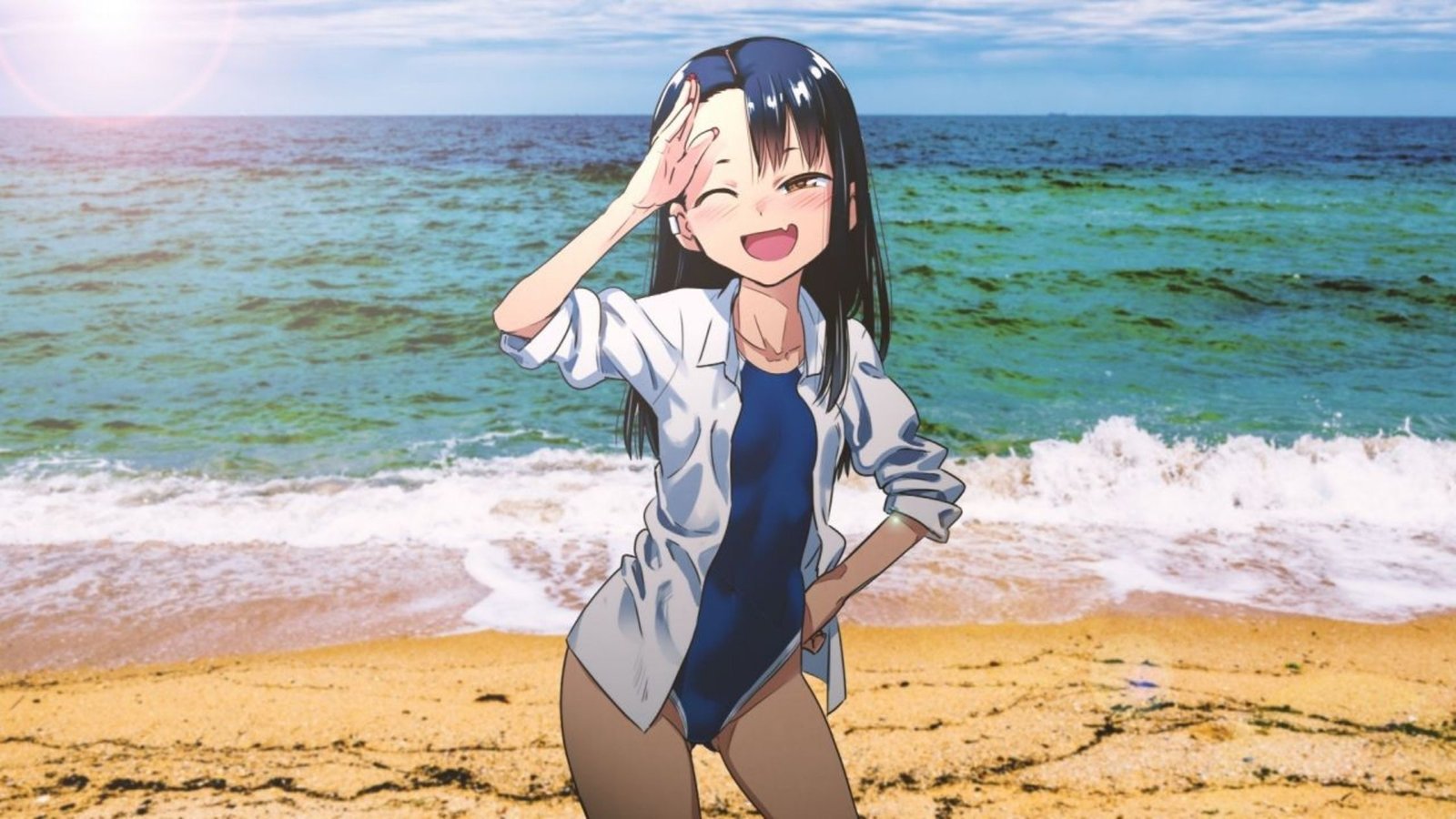 Don’t Toy With Me Miss Nagatoro is a rom-com anime which is about as evident from the name itself is about a girl called Nagatoro teasing Naota, her senior. The series at the beginning seemed like a bully-victim-based story which later seemed completely different. It’s mainly about character development and knowing the certain boundaries of others around one. The anime actually highlights the fact that what we see is not always the case. Nagatoro who seems to be bullying Naota all the time actually has feelings for Naota as it appears.

She can’t just confess that so she chose the way to tease Naota just as an excuse to become close to him. However, it should be kept in mind that bullying to any degree isn’t acceptable but in this series, we see Nagatoro actually caring for Naota. Defending him, standing up for him, supporting him through tough times, Nagatoro does all that and she also maintains the line when she teases him. Even Naota at first being cornered learned to stand up for himself, he became straightforward and more communicative.

Naota who once couldn’t even speak up properly even protected Nagatoro at times and that shows the character development aspect quite vividly. The OP and the entire anime show flawless color-enriched animation with silly style animation when necessary holding hands with properly placed humor. The series just shows that anyone can be friends with anyone if they are on the same plane. Naota and Nagatoro despite being entirely different they show a quite influential and unique relationship filled with fun jokes, serious elements at times all in all the mutual respect and care of each other. Here are all the details we know about Don’t Toy With Me Miss Nagatoro Season 2.

The first season of the series was released on 11th April 2021. Fans have been long awaiting this anime adaptation. However, there are certain controversies regarding this series. Some consider the bullying element of the anime quite questionable, some say otherwise. The second season has yet not received any confirmed date yet. But fans are intrigued to see what new turns will the relationship of Naota and Nagatoro will take.

The anime is about the daily interactions of 1st-year high schooler Nagatoro and her senior Naota who is a 2nd-year high schooler in the same school as Nagatoro. Naota is a shy, timid kind of guy who prefers being in his own shell without any interaction with the people around him. On the other hand, Nagatoro is an over-energetic outgoing extrovert who hangs out with her friends and knows how to deal with different people.

Naota first encountered Nagatoro when he was in his school library studying. At first, Naota was pretty repulsed by Nagatoro and her friends later on Nagatoro walked up to him and started teasing him to the point where he started crying. But Nagatoro pulled out her handkerchief to wipe his tears and then she introduced herself and said that she will address him only as “Senpai”. Naota is a member of the art club in school.

He finds his serenity in sketching and drawing various objects in the club room so much so that he considers that place as his own ” Oasis”. But thanks to Nagatoro out of nowhere his place of serenity wasn’t that peaceful any longer. Nagatoro almost every day started to show up at the art club room just to hang out with her “Senpai”, well more like to tease him, call him names, and in general to make fun of him.

She made fun of Naota’s otaku interests, called him gross and what not. She even bullied him in a sexually suggestive way and Naota unable to handle that most of the time got flustered and was called gross by her. However even how Nagatoro bullied Naota there was a certain line that she never crossed she even asked Naota that why doesn’t fight back when he gets bullied.

And at certain point viewers could realize that Nagatoro holds a soft corner in her heart for her “Senpai” and that Nagatoro does all of these as an excuse just to interact and hang out with Naota and see his reactions that’s all. But with time Naota realized that he needs to fight for his might or else this nightmare of his will never ends.

As time passed with frequent bullying from Nagatoro compelled him to grow a spine and stand up to Nagatoro by using comebacks to her bullying which put Nagatoro into perplexing conditions. This mutual flow of interaction made the chemistry between Nagatoro and Naota much more smooth as they were almost coming to the same degree. After some time it seemed Naota and Nagatoro are getting close and kinda getting accustomed to each other’s presence.

Nagatoro asking Naota to draw her and Naota at first being nervous but still managing to draw an exquisite sketch of her. What was the highlight of the scenes was the dedication of Naota he showed while he was making the sketch and how Nagatoro blushed and went speechless when she saw the sketch and also acknowledged the hard work Naota put into making that sketch. They even started hanging out outside of school from going home together, to go out to eat, eventually getting caught up in the rain.

Nagatoro once even invited Naota over to her house to wait for the rain to stop where even though a bit awkward at first, later they played games and had loads of fun. Naota at many points throughout the series proved how much of a gentleman he is and how much he actually cared about Nagatoro and respected her. And Nagatoro also showed how special Naota actually is to her. She gets gloomy whenever she hangs out with other boys and all and even when she gets asked out she shows no interest.

It is only with Naota she becomes fully energetic and lets her guard down. Nagatoro’s friends Gamo, Yoshii, and Sakura at first started as cruel and self-centered as they started bullying Naota and taking advantage of his timid nature for their own amusement but with time even they become considerate and as they realized the mutual likings of Naota and Nagatoro and tried to set them up by creating certain scenarios.

Gamo started to address Naota as “Paisan”. All of them started hanging out together and become actually good friends yet the teasing never stopped. Nagatoro’s softness for Naota became more visible when she started to defend Naota from getting even touched by her own friends. Gamo and others took the advantage of this insecurity and got more involved with Naota just to provoke Nagatoro into defending Naota.

Sakura when asked Naota to go on a pretend date with her in order to catch a stalker, Nagatoro was blown away, she even did all she could just end their date soon even though it was just pretend. When Nagatoro was hanging out with her friends and some other guys she seemed like she was unbothered.

Even when those guys asked her and her friends to accompany them, she along with her friends seemed all awkward and uncomfortable but when Naota mustered up all his courage and showed up at the very moment in front of them to ask them to join him, nervously, Nagatoro jumped up and started glowing like a bulb with a smile on her face while she agreed to him, even Nagatoro’s friends accompanied him leaving the other guys behind.

All were going fine only just before the president of the Art Club showed up. Witnessing the mess Naota, Nagatoro along with others created in the art room she decided to place a letter to dissolve the art club. Naota revolted against it as this art club is extremely important to him, he was backed by Nagatoro and her friends. They ended up in a challenge against the president where they have to win a contest in the cultural festival to prevent the extermination of the art club.

Nagatoro- Sumire Uesaka provides the Japanese voice for Nagatoro in the anime. She is from Kanagawa, Japan. She won the “Best Rookie Award” in the 10th Seiyu Awards. She is currently affiliated with Voice Kit and made her singing debut back in 2013.

Naota- Daiki Yamashita is the Japanese voice for Naota in the anime. He is from Shizuoka, Japan. He won the “Best Male Newcomer Award” in the 8th Seyiu awards. Currently, he is associated with Arts Vision.