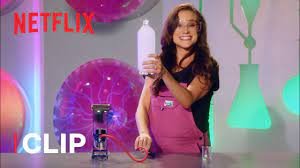 Emily wonder lab has made many parents happy that their children can watch other than animations and cartoons on streaming sites. They were happy that science was being taught in an innovative way that makes children happy. Parents want this season to be renewed so in this article we are going to address everything related to Emily’s wonder lab Season 2.

Emily’s Wonder Lab is an educational television series aimed at the kids. It has a total of 10 episodes with a running time of 11-14 minutes. The composers of the show are Louis Clark and Dave stone. It is the United Kingdom. Emily’s wonder lab Season 1 was released on August 25 of 2020.

This kind of show might not get great appreciation as there are very few people that are aware of this kind of show. They are very informative for the kid and also an adult. They can be entertaining equally for the parent and the kids, rather than some kid shows where only kids are entertained. These various kinds of experiments will always keep their mind curious and searching for something new to create. Even though the series is educational, it is made in an interesting way that can be palatable for the kids.

The program failed to make an impression on the top ten lists throughout the world, failing to crack the top ten in either the United States or the United Kingdom. It did, however, make an appearance in several nations, including Finland, Qatar, the Netherlands, and Norway. Live-action kid’s material on Netflix appears to be limited to one or two seasons. It’s one of a few categories where Netflix has struggled to get momentum.

Since its release in 2020 people have been waiting for the new season for 2 years. A petition has been launched on Change.org in an attempt to resurrect the program on Netflix or elsewhere. Samantha Furrer started the petition in early July 2021, and as of July 7th, it had over 75,000 signatures. Aside from Emily’s Wonder Lab, you may find Emily Calandrelli is a field journalist on Netflix’s Bill Nye Saves the World (which lasted three seasons). Emily has also presented FOX’s Xploration Outer Space and has written several books, including the soon-to-be-released Reach for the Stars, illustrated by Honee Jang.

Each episode delves into a different topic, such as utilizing air cannons to bowl, baking with solar-powered ovens, investigating the ingenious design of eggs, and, maybe most significantly, making rainbow horse toothpaste. Each episode also included experiments you may try at home.  The list of experiments in these 10 episodes is Glow Party, Walking on Oobleck, Rainbow Horse Toothpaste, Tornado Chasers, and Eggs! Eggs! Eggs!, Slime time, Blowing with air, Ballon Power, Spooky Science, and Solar Bake Off. Doing different experiments will always create curiosity in the child’s mind which will help in improving their cognitive skills.

As Emily’s wonder lab Season 2 is canceled there will be no plot, but if the cancellation is re-thought it will have the same format.

The hosts of the show are Emily Calandrelli; Mason Wells; Sky Alexis; Kennedi Butler; Makenzie Lee-Foster; Arya Darbahani; Zaela Rae; Alex Jayne Go; and Tenz McCall. These casts do experiments in different episodes and give a variety of knowledge on science.

If Emily’s wonder lab Season 2 is renewed even after deciding to be canceled then the cast will be the same.

As Emily’s wonder lab Season 2 is canceled, there is no availability of a trailer or teaser.

If you have a child, it is recommended to watch series with them and make them interested in science at an early age.