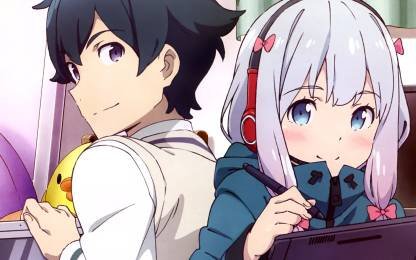 Eromanga Sensei is an ecchi, comedy, and drama series with 12 episodes, and each episode’s run time is 23 mins. The anime is an adaptation of a light novel, aired in 2017. Should fans wait for a new season? And what to expect in the new season? Curious?

It is a light novel by Tsukasa Fushimi and illustrated by Hiro Kanzaki. The anime was produced by A1 pictures and aired from April to June 2017. 2 OVAs were also released in January 2019. The anime got adapted from a successful light novel.

Here’s a quick recap of the 1st Season. The story mainly revolves around Izumi, Masamune, and Izumi, Sagiri; the two step-siblings living together under the same roof after their parents’ death.

Masamune is a student in high school but earns his living by writing light novels. His only wish is to meet his acclaimed manga illustrator, Eromanga Sensei who is famous for drawing the lewdest erotica. Under some embarrassing situations he finally gets to meet the artist only to learn, she is none other than his own little sister who had shut herself in her room for one long year. After this sudden encounter, the life of the two changes drastically. Masamune knew her as a very shy and introvert who hid behind her mother upon their first encounter. To his surprise, she changed into a whole new person when she engages herself in drawing. She becomes a total pervert who loves to draw erotic pictures of women in underwear and nude.

The anime is a really fun watch, the light comedy will surely make you roll in laughter. Masamune, often called an idiot, was slapped by her sister more than often and so was his constant failure to understand her feelings; will make you fall for his naivety very quickly. Will they both accept each other’s feelings and what does the future hold for them? And to make matters more complicated the other female writers to propose to him eventually, but will he turn them down?

Well, the anime last aired in 2017 and it’s been 4 years since its release. Aside from a few negative reviews, the anime received an average rating and the response has been really good. The light novel too is selling quite well. Fans not only loved the 12 episodes but also the two exclusive episodes released later on, as well.  It can be speculated that the busy schedule of the production team A1 might be the only reason for its late launch.

However, both the author and the director are busy with other series, so yeah, the chances are very slim to release an anime adaptation that too very soon. But still keep your fingers crossed, as you may expect some good news in a year or two.

Although it received an average rating of 6.48 from MAL, the season had great commercial success. Since two more episodes were released two years back, who knows you might hear the good news.

If Eromanga Sensei is on cards you may get to hear about its release shortly!

But if you have given up your hope on its renewal then, you can start reading the light novel from Volume 4.

You can watch Season 1 in Crunchyroll, Funimation, and even on Amazon Prime Video.

That’s all for now.