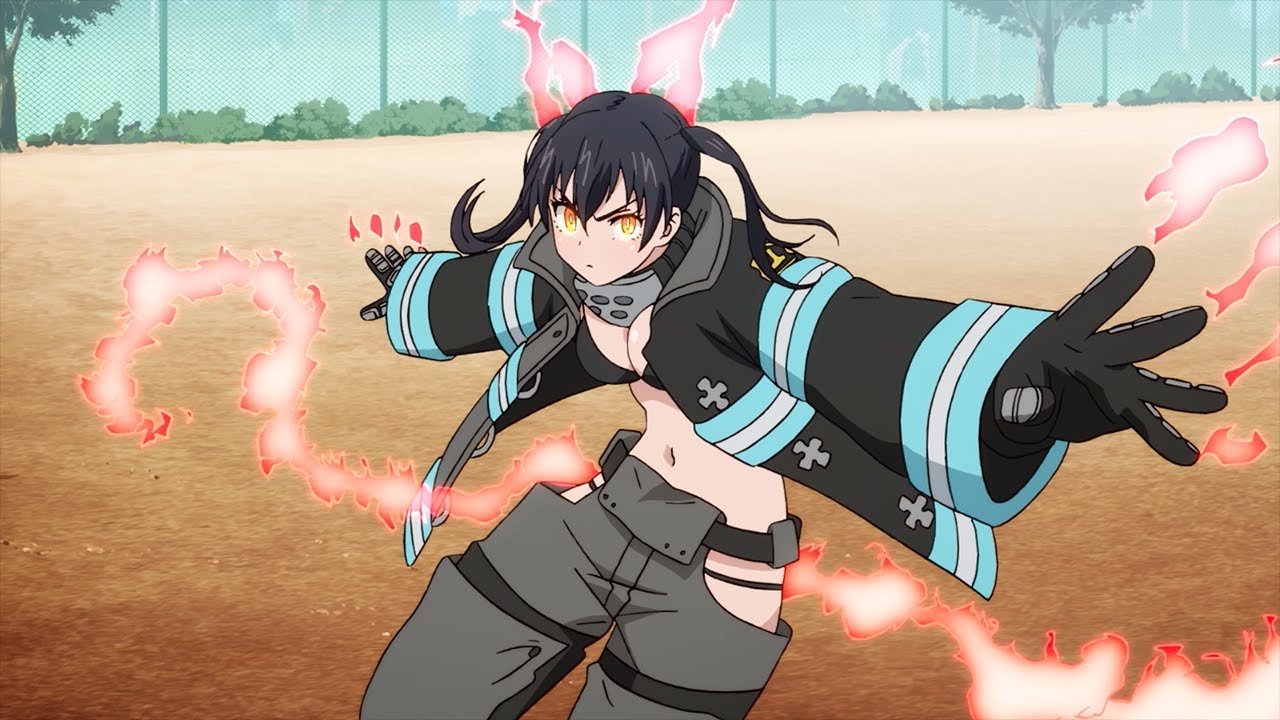 Fire Force is an amazing anime that is a loyal adaptation of the manga series of the same name which is written and illustrated by Atsushi Ōkubo. The plot is very well written and the pace is just right. It gives the viewer an adequate amount of time to savor the grim flavor of the plot but at the same times, it goes out of its way to put some light-hearted humor aspect of it on the table while refraining from dragging it so long that the viewer gets bored.

At first, it might seem like a usual shonen plot with a usual overenthusiastic shonen protagonist but as the story proceeds it slowly reveals that how much more the anime has to offer rather than just being a bland predictable story. The story raises a lot of questions and answers it eventually, however as of now there are a lot of unanswered questions but the environment of suspense it creates surrounding the plot makes the viewer more gripped by the story.

Each character is unique and very well written. Their personality and opinions make perfect sense either based on the situation they have grown up in or on their perspective. And each character has their own unique way to deal with things which makes the viewers connect and root for them as well. Even if they are supporting characters, the detail and dedication put behind them just improves the connection between the viewer and the anime as a whole. As of now, the anime series has 2 seasons with 48 episodes in total.

The manga is still going on and the author has said that it will be over soon. The series has gained a massive amount of fan-following thanks to its remarkable characters and intriguing plot. As of now, it is expected that the third season of the series will release in the year 2022 but it can also release in late 2021. Though chances of the latter happening seem very low. Fans just can’t wait to see more of Shinra, Making, Tamako, and others and also to have the answers to all the questions the series has raised so far.

The plot is based in a supernatural world where a horrifying phenomenon called Spontaneous Human Combustion prevails. Nobody has any clue regarding the phenomenon. Nothing about how it started, how it ends, why it happens, when does it happen, to who does it happen, and how to prevent it from happening so is known. It just happens out of nowhere without any prior anticipation or warming of any sort. This random phenomenon has petrified humans for many years now.

The phenomenon not only burns the victims into blazing flames but also turns them into grotesque creatures wrapped up in flames which are most of the time extremely violent and don’t seem to have any type of emotions which makes them a greater threat. These unbound creatures are named Infernals. However, after certain years of living among this phenomenon, certain humans have gained the ability to control and manipulate fire according to their will.

On accounts of human combustion, the infernal comprises of the first generation, and these humans who hold the capabilities to control the power of fire accordingly belong to the second generation or third generation. These later generations are called Pyrokinetics. And the intensity of their strength and abilities to control fire depends upon the generation each individual belongs to. The third generation is more adept and has greater control over fire than their previous generation. To retaliate the threat these Infernals pose to humanity the Tokyo Armed Forces, Fire Defense Agency, and Holy Church of Sol came together to pass the judgment and to come to an agreement of establishing the Special Fire Force.

What Happens At The End?

The Special Fire Force are again divided into a few departments and are distributed over different location each covering a certain area and each department are bestowed with the duty of dealing with issues related to Spontaneous Human Combustion including Infernals in areas under their jurisdiction. The story follows Shinra Kusakabe, a young enthusiastic third generation Pyrokinetic as he navigates through his life as a member of the Special Fire Force Company 8 and how he deals with different situations involving his friends and foes while dealing with his trauma from his childhood and trying to break through the shackles of his past to achieve his goal of becoming a hero over whom everyone relies on.

He deals with a unique disorder which causes him to smile under intense situations involving pressure and deep emotions which stand out inappropriate under certain situations. He is also called the Devil’s footprints which he got thanks to his Pyrokinetic ability of ignite his feet at will, creating an explosive impact. He gets deeply involved with his duty of extinguishing the threat of Infernals and putting their soul to rest. However, as the story progresses, Shinra slowly realises that his journey of being a hero, a journey he was so determined for isn’t what he actually expected. The actual path is more complicated and entangled with a lot of issues such as politics among the different brigades of the Special Fire Force, the trauma from seeing so many people losing their lives, so many families losing their loved ones, which deeply moved Shinra.

The situation is made worse by the unusual appearance of certain Infernals and the emergence of a shady group that claims to hold the answers to all the questions regarding the phenomenon of Spontaneous Human Combustion. Shinra then sets off to deal with all of these issues and to uncover the truth that has been covered up in shadows which is likely to have a link to an accident that happened in his childhood along with his path of being a hero.

Tamaki- Tamaki’s Japanese voice is provided by Aoi Yuii, also famous for her role as Yoshiko from Aho-girl. She is from Chiba Prefecture, Japan and was born on Mar 27, 1992.

Arthur- Yuusuke Kobayashi provides the Japanese voice for Arthur is the anime series. He was born on Mar 25, 1985. His other notable roles are as Senkuu from Dr. Stone, Kanzaki from A.I.C.O and Satoshi from 6 Lovers.

The anime is available on Hulu to watch.