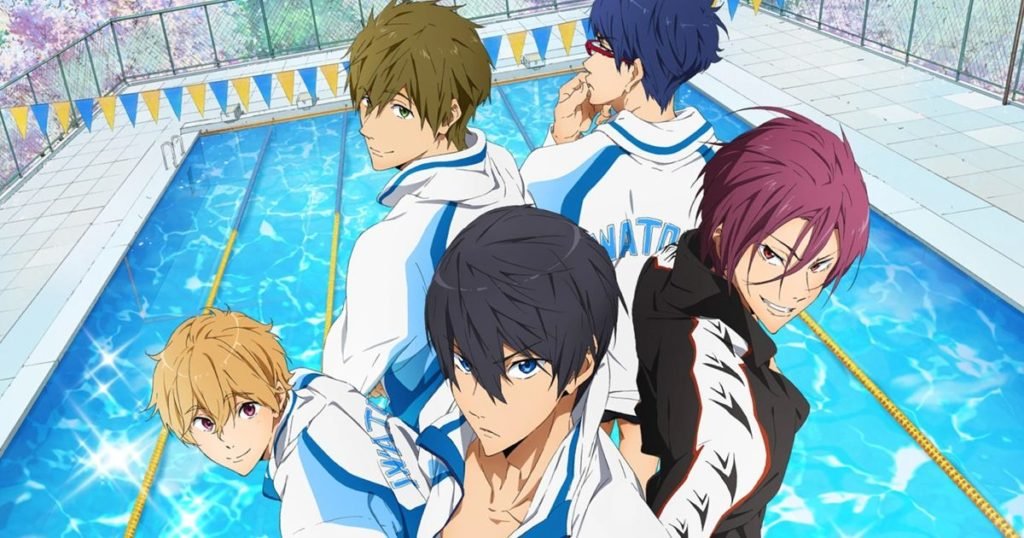 Animes such as Kuroko’s Basketball, Haikyuu, Hanebado, Yowamushi Pedal, and even classics like Slam Dunk raised the bar for the sports genre in anime too high. However the anime Free is also considered to have an enormous amount of contribution to the high reputation the genre has gained. The story of Free not only revolves around the activity/ sport of swimming. It concentrates on the passion and the enigma that surrounds it. The story has taken the sport to a spiritual level. Like it tells us about the passion that goes as deep as the water in the ocean. It also focuses on the characters and their development both physically and mentally which is directly and indirectly connected to the activity.

We get to see the story of some young people trying to navigate through their path in life or more like swimming through the deep ocean of life. The anime goes out of its way to explore the life of the people involved and is not stagnant to the activity of swimming only despite that being the center of the plot and the way it’s executed clearly justifies the enormous fan base the anime has gained whether it’s for the plot, the interesting unique characters accompanied by the eye-dazzling quality that Kyoto Animations has provided.

The plot allows us to navigate through a story of youth, passion, and human bonds. The story revolves around the activity of swimming whether as a means of sports or not. We get to follow the life of one Haruka Nanase as he navigates through his youth accompanied by hopes, dreams, aspirations, and his chemistry with the people he surrounds himself with. Haruka, is a high school student who holds a deep admiration for the activity of swimming.

From his very childhood, he has had a deep affection for water which ignited the deep passion that he holds for swimming. However not only did he have passion and ambition, but he was also quite talented when it came to swimming. In elementary School, he won a swimming tournament, where he got competed against his friends Makoto Tachibana, Nagisa Hazuki, and Rin Matsuoka. But the ending wasn’t even remotely as close as what Haruka expected. Rin got extremely disheartened after he got defeated in the tournament which deeply impacted Haruka. Even though he won, the pain he saw his friend go through made it all meaningless to him. Following this incident, all of the friends got detached and went their own way away from each other. However, fate had something else planned for them.

All of them again met each other years after when they all got enrolled in High school. But by that time a lot has changed, it is revealed that Rin went abroad to learn more about swimming, and now after returning he is enrolled in an all-boys boarding school and has gone through a major personality shift. In high school, we get to see Rin showing no will to restore the thing he had with his friend once but on the contrary, he is now determined to put down Haruka and show him that he is far superior to Haruka when it comes to swimming. However, it should be kept in mind despite Rin’s shallow behavior, deep inside Rin is a very caring person which gets brightly highlighted when he Interacts with his little sister Gou Matsuoka. Rin as a big brother is an extremely caring person, ready to go to any extent to do what he seems best for his sister.

Tachibana on the other hand is best friends with Haruka. The timid yet caring guy is practically inseparable from Haruka however he hides a secret that is related to his past trauma. Haruka and Tachibana decide to start the Iwatobi High School Swim Club along with Nagisa. Nagisa is a kind straight forward person who also holds a deep affection for swimming. It was Nagisa who recruited Rei Ryuugazaki, a talented handsome who has been classmates with Nagisa since 10th grade as the fourth member of the club. Rei was initially a part of the track team but decided to leave the track team to join the swimming club. The new club started their training to enhance their swimming skills. Four of them started to get close to each other and as they learn about each other, all of them started to bond with each other forming a beautiful chemistry as they train. However, all of this endeavor is for them to settle things between Rin and Haruka and make draw a conclusion regarding matters surrounding them.

Haruka- Megumi Matsumoto who also plays the role of Jirou from Death Parade provides the Japanese voice for Haruka in the anime. She is from Kumamoto, Japan, and was born on Feb 06, 1977.

Rin- The Japanese voice of Rin Matsuko in anime is provided by Mamoru Miyano who is widely popular for his role as Dazai Osamu in the widely acclaimed anime Bungou Stray Dogs. His birthday is on Jun 08, 1983, and he is from Saitama, Japan. In the second Seiyuu award, he won the Best Voice Actor award.

As we have mentioned above that the 4th season of the show has not been released as of now. So obviously we cannot say anything regarding the trailer for season 4 yet. But no worries guys, you will get the trailer for the 4th season one month before the show gets its release. Till then if you have not watched the show yet I would like to suggest you that first watch the trailers of the show, then decide whether you should watch this show or not.

Where To Watch Free Season 4?

As of now, we do not know where the makers will stream this season, but yes you can watch the previous seasons on JustWatch.