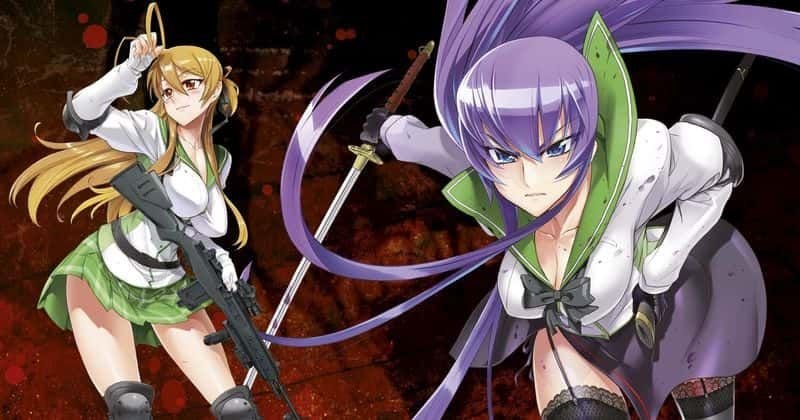 Highschool of the dead is a Japanese Manga series. The anime version of the show is directed by Tetsuro Araki and produced by Mitsutoshi Ogura. It was written by Yosuke Kuroda and Takafumi Wada wad the music composer. The first episode was premiered on July 5, 2010, and ended on September 20, 2010. The story revolves around a group of students who finds themselves and the world in the middle of a zombie attack.

It received positive responses from the audience. The show has an average rating of 7.2 out of 10 on IMDB and 7.1 on MyAnimeList.net out of 10. According to Google, 89% of users liked the show. Chris Beveridge commented that there is a lot to like here if you want to watch something interesting than usual high school dramas.

The first season was released in the year, 2010. There is no official announcement from the makers regarding season 2 yet. Probably, season 2 won’t return as 10 years already passed and the makers have not said a single word about the next season. The reason for the cancellation of the second season is unknown and it is expected that it always remains unknown. Moreover, the writer of the show is no more. The producers of the show are not interested in producing the second season. Even if they go with it, we would never see what the original writer had in his mind. The new writer will have to work hard to make the storyline of the show as good as the first season.

Highschool Of The Dead Season 2 Plot

The first season had 12 episodes in total. This season started with the separation of Takashi Komuro and his childhood friend, Rei Miyamoto. He saw the zombies who were attacking the front gate of the school. He warns Rei and Hisashi Igo. They escape with them before the news of the attack spreads across the school. Hisashi Igo is the romantic interest of Rei and they are dating each other. The three children went to Mr. Wakisaka who was a teacher but turned into zombies. He bites Hisashi in her arm. Saya Takagi and Kohta Hirano try to avoid zombies. Rei tried to contact her father and learns that the whole city is disturbed. Saeko Busujima is the president of the Kendo club and successfully saved the school nurse, Shizuka Marikawa.

The zombie pandemic has spread worldwide. Takashi tests a theory on zombies and turns out that they can only respond to sound. However, one of the survivors made a sound and they have to fight the zombies. A bus full of zombies crashed and they met the other survivors. Takashi and Rei move towards the city. They encounter a police car and Rei finds a revolver, baton, and some bullets. In the last episode, the gang is on the island but free from the zombies. The girls decided to have some fun. Takashi puts some leaves on fire but these leaves were hydrangea leaves. It caused them to have sexual hallucinations.

There are still many questions that need to be answered. What happens next? How did they stop hallucinating? Well, we have no answers to these questions.

Highschool Of The Dead Season 2 Characters

Highschool Of The Dead Season 2 Trailer

Since there is an official announcement regarding season 2 there is a teaser or trailer of the show for the second season. If you want to you can watch the trailer of season 1 by clicking on the link given below. In case you liked it and want to watch the whole show, it is available on Hulu.