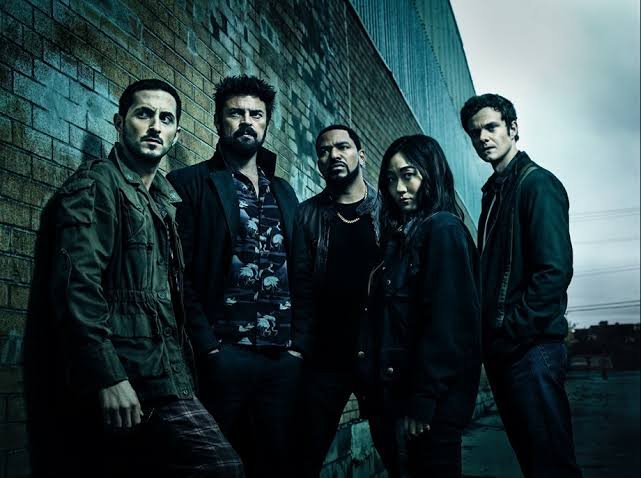 If you have read The Boys then you know very well who The Homelander is. If you haven’t, no fear we are here to tell you exactly that. The Homelander is a superhero and antagonist in the comic book series The Boys. He is one of the strongest in the comics and the leader of The Seven. He has been created by an organization called the Vought-American in very pathetic conditions if one might add.

You must be wondering how someone so powerful can be someone so wicked? Well, the simple answer is that he never learned ‘with great power comes great responsibility. Thus we find an arrogant, narcissistic, sadistic psychopath. He cares very little about those around him and often sees humans as lower to him.

He has a spectrum of powers he can control. His powers include heat vision, super strength, durability, flight, and enhanced vocal cords. Trying to make him a hero in the eyes of the public Vogue even comes up with a cover story. And unsurprisingly it matches that of Superman’s story.

In the television adaptation of The Boys, The Homelander is unarguably a rogue spin-off of Superman.

Who Is Black Noir?

Black Noir is another member of The Seven. However, one big twist that we find in the comics is that he is an identical clone of Homelander.  Vought-American made sure that if ever  The Homelander went rogue they create something strong enough to kill him. As a result of which we get Black Noir. He is mute, stoic, and pretty boring throughout the comics.

To be honest it is a very pathetic purpose in one’s life. So we really cannot blame Black Noir for losing his mind. As years passed, Black Noir was unable to fulfill his life’s purpose. He became psychotic and did some horrific things just to frame The Homelander. As Black Noir is a copy of Homelander it is only logical that they share all the abilities equally. However, Black Noir was meant to stop Homelander so he is much more powerful than him.

In the series, Black Noir is a more villainous version of Batman.

Now we know about our supervillains and their backstory.

But we also need to know why these two supervillains fight amongst themselves. Essentially we get a villainous batman fighting a villainous superman. We already know part of that. Black Noir had gone psychotic, having to sit and wait until he could finish Homelander. So he tried to frame him in many situations.

Black Noir has been manipulating the whole story from behind. Looking for the right time to strike.

The archenemy of The Seven is CIA black ops agent Billy Butcher. So Black Noir planned out a very unfortunate plan to take Homelander down. This silent and emotionless mastermind proceeds to rape Butcher’s wife. She then dies giving birth.

He puts this entire blame on Homelander. We already know how egoistic and self-centered this guy is. It isn’t surprising that he loses his mind to such allegations. When faced with the charges of multiple heinous acts Homelander is unable to recall committing these acts. He begins to question reality having lost his sanity.

Homelander kills the President in the White House. Noir and Butcher then confront Homelander. This is where we get the most shocking revelation of the whole comics. Noir finally takes off his mask to reveal himself as a clone of Homelander.

He also tells everyone that he is the one who raped Butcher’s wife. This leads to Homelander losing his calm and both of them get into a fight.

As for the results of the fight, it is quite shocking. No one else in The Boys comic universe comes close to beating Homelander. However, Noir was created to stop Homelander. Undoubtedly he is more powerful.

Sure enough, we get to see Black Noir emerging victorious. He had torn Homelander into pieces.

The fight did take a heavy toll on Black Noir too. He barely survived. He is left disemboweled and heavily injured. Finally, with the help of marines, Butcher finishes off Black Noir too.

The clear winner in the fight between the two is Black Noir. Both of them are a match of power. But for someone who has dreamed of finishing Homelander off for so many years, it is easier to get the job done. One can also say that Black Noir was more insane than Homelander. But with the presence of The Boys, neither of the two obnoxious villains manages to walk away.

What Happens In The Boys Series?

The third season of The Boys is currently airing on Amazon Prime. If you don’t know what The Boys is all about, we have got a summary for you.

In the Boys, universe individuals with superpowers are recognized as heroes by the general public. They work for a powerful corporation known as Vought International. Vought is the original creator of the superhumans. They have also made a way of monetizing them. However, on the outside no matter how heroic they are, most are arrogant, selfish, and corrupt in reality. The primary focus of the series is on two groups namely the Seven and the Boys.

The series has been derived from a comic of the same name. However, the series has deviated quite a lot from the comics. However, one thing that they have kept in common is the friendship between Black Noir and Homelander.

Homelander does not trust anybody else other than Black Noir. This friendship is greatly influenced by the comics. But the question remains whether the producers will follow this storyline or not.

The most exciting part for fans was the wait for the face reveal of Black Noir. Fans were expecting that the series version of Black Noir will also be a clone of Homelander. The face reveals happened in episode three. But fans were disappointed a lot. The reason is that a completely different actor is seen to be playing Black Noir. So it is obvious that the show will not take the course of the comics. This does open up newer doors for the series. It holds a future of unplanned surprises and twists for the series.

The Cast Of The Boys

The cast of The Boys is nothing less than star-studded. Billy Butcher is a former SAS operative. He hates anybody with super powers. Mostly he hates Homelander. The reason is that he blames him for the death of his wife. The character of Billy Butcher is portrayed by Karl Urban. We also see Jack Quaid as Hugh “Hughie” Campbell Jr.  Antony Starr does an excellent job as Homelander. Erin Moriarty plays Starlight. Starlight is the only person with superpowers who help save civilians for the good of her heart.

In the series, we see Nathan Mitchell as Black Noir. Although in the comic we see that Black Noir is a clone of Homelander. Other cast members include Aya Cash as Stormfront, Jensen Ackles as Soldier Boy, Dominique McElligott as Queen Maeve, Jessie T. Usher as A-train, Chace Crawford as The Deep, Tomer Capon as Frenchie, Laz Alonso as Marvin T. “Mother’s” Milk and many more.

Homelander is the leader of The Seven. Other members of The Seven include Black Noir, Starlight, Queen Maeve, A-Train, and The Deep. The team that The Seven has to face and maybe even be scared of is The Boys. The Boys is led by Billy Butcher. Hughie had joined them previously but left later on. Mother’s Milk is the second-in-command of The Boys. He plans and organizes all the endeavors of the Boys. Frenchie and The Female also join The Boys.

When Is The New Episode Releasing?

The new season of The Boys that is season three aired on 3 June 2022. The new episode of The Boys, that is episode 4 will be released on 10 June 2022. Currently, we are getting to see a brewing romance between Homelander and Starlight. The new episode will likely explore this area more. Season three would consist of a total of eight episodes. The series has deviated quite a bit from the comics version. We don’t yet know which course the series will be taking. It is, however, very exciting for the fans to explore new possibilities with the series.

Where To Watch The Boys Season 3?