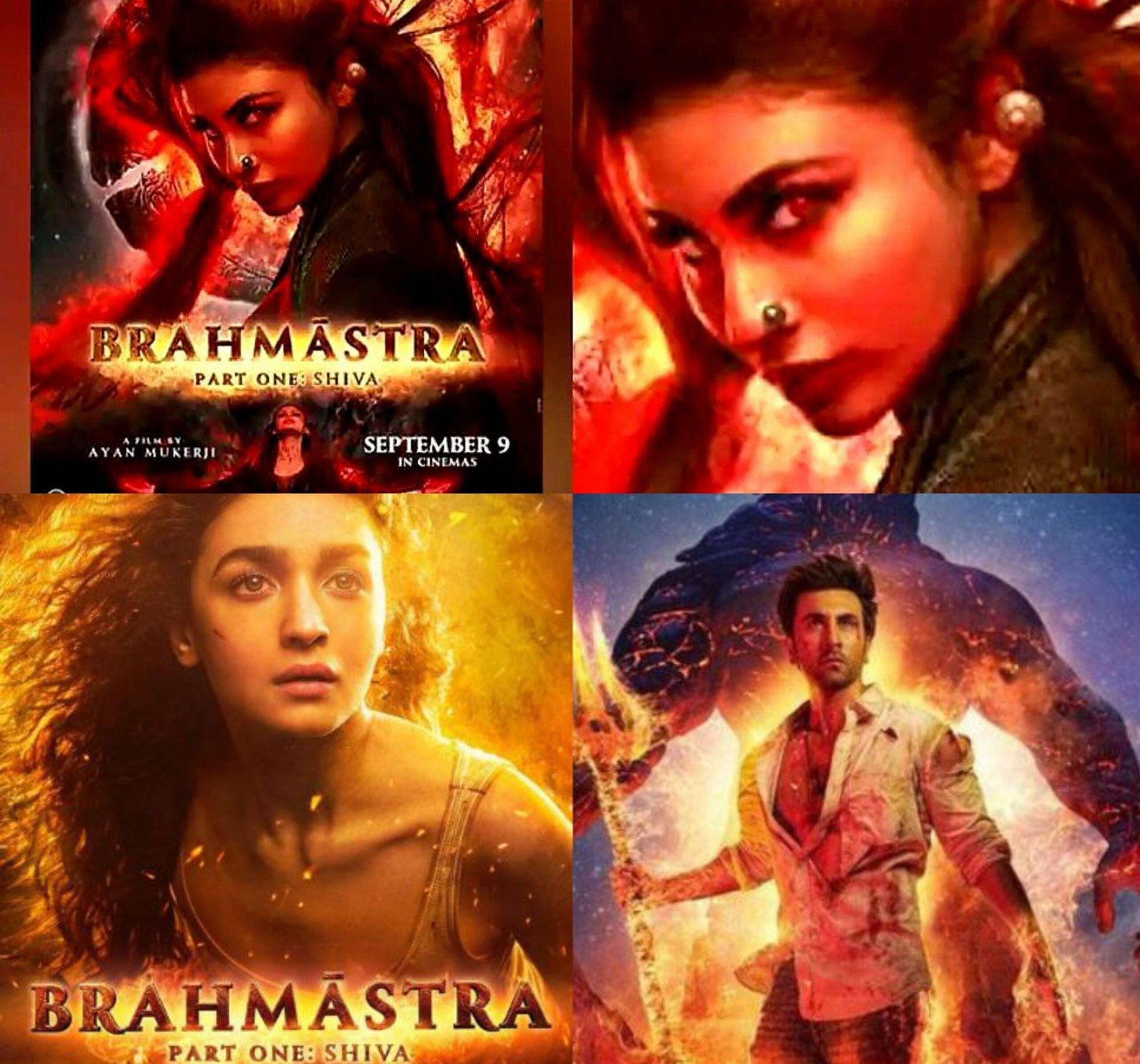 Brahmastra Part One: Shiva will be released in theatres on September 9th. The film is part of a new original cinematic universe based in the current world and inspired by deeply rooted notions and legends from Indian history. Produced by Karan Johar, Apoorva Mehta, Namit Malhotra, and Rani Mukerji.

Astraverse films will be directed by Ayan Mukherji, who previously directed Wake Up Sid and Ye Jawaani Hai Deewani with Ranbir Kapoor. Baahubali demonstrates how mythical stories like Amar Chitra Katha may help us expand our film industry.

Ranbir Kapoor and Alia Bhatt star in the film, which also features Amitabh Bachchan, Nagarjuna, Dimple Kapadia, and Mouni Roy. The film was first announced in 2014, but it has been delayed multiple times since then. It’s the start of The Astraverse, India’s first original movie world. Under the auspices of Dharma Productions, Prime Focus, and Starlight Pictures, it is produced by Karan Johar, Apoorva Mehta, Namit Malhotra, and Mukerji in partnership with Star Studios.

We hear that Bhramastra is the most powerful of all the astras, and that Lord Shiva is the God of these astras. The first film stars Akkineni Nagarjuna, Amitabh Bachchan, Alia Bhatt, and Mouni Roy. Bhramastra has been on the market for three years. With Fox Star Studios, Karan Johar is producing the film.

Is Astraverse Same As Marvel Universe?

The Marvel Cinematic Universe (MCU) is a shared universe and media property centered on Marvel Studios’ superhero films. “Brahmastra might be an Indian version of a Marvel movie,” one Twitter user speculated. But it is not the same as Marvel movies. It’s a whole other creation and has its own beauty. They’re taking a big risk by making a superhero film in the Marvel and DC universes. And don’t start comparing yourselves because #Hollywood has a budget of thousands of crores,” a Twitter user said. Brahmastra, according to director Ayan Mukerji, “takes us further with our technology.” The film heralds the start of a new cinematic universe known as ‘The Astraverse.’ According to the director, the film “touches on our roots,” “celebrates our rich culture,” and “moves us forward.”

Baahubali demonstrates how telling our own legendary stories may help us develop the Indian film market. Ayan Mukherji, who previously collaborated with Ranbir Kapoor on the films Wake Up Sid and Yeh Jawaani Hai Deewani, is teaming up with him again on the Astraverse flicks.

Bhramastra has been in production for three years and has been delayed three times. Amitabh Bachchan, Alia Bhatt, Mouni Roy, and Ranbir Kapoor appear in the film. The film is part of a trilogy produced by Ayan Mukerji called the ‘Astraverse.’

The fantasy adventure film Brahmastra Part One: Shiva, starring Ranbir Kapoor and Alia Bhatt, will be released worldwide by Disney. Amitabh Bachchan, Mouni Roy, Dimple Kapadia, and Nagarjuna Akkineni also star in the film. It’s claimed to be the start of the Astraverse, a new cinematic world similar to Disney’s own Marvel Cinematic Universe.

Amitabh Bachchan’s voiceover brings us to a mystical world where we can experience the powers of ‘Water,’ ‘Fire,’ and ‘Wind.’ These three ancient forces are known as ‘Astras,’ and the Lord who oversees them all is known as ‘Brahmastra.’

They fall in love after Ranbir nicknamed Shiva and Alia aka Isha meet at a fair. On the other hand, Mouni Roy alias Junoon directs her demonic army to track down the Brahmastra and utilize it to rule the world. Even Nagarjuna, aka Aniket, arrives in a spectacular avatar, possessing 1000 Nandi’s power.

On September 9, 2022, Brahmastra, starring Ranbir Kapoor and Alia Bhatt, will be released. Ayan Mukerji is the first director from Bollywood to use visual effects in a science fiction action adventure film. Ayan has only directed two previous films, both of which include some of Bollywood’s most memorable storylines.

A trailer for Brahmastra was recently released on Sony Music India’s official YouTube account. The trailer gave us a sneak peek into the plot of the film. The concept “Astraverse,” which few people are familiar with, was introduced to the audience.

#Brahmastra trailer: We don’t expect Indian cinema to produce big-budget films with a lot of visual effects. We can’t expect Marvel-level graphics right away, but the purpose must be respected. Internet users were enthusiastic about the trailer, pointing out how well-made the picture is in terms of plot.

It’s simple to see why Brahmastra is getting so much attention because it’s a Dharma Productions film. On Sony Music India’s official YouTube account, the trailer for Brahmastra was recently published. On September 9th, 2022, the film will be released in theatres. They’ve also started comparing it to Marvel and labeling it a knock-off because Bollywood is trying so hard with a $39 million budget to impress its fans.

Brahmastra Part One: Shiva will hit theatres on September 9th of this year. BRAHMASTRA- the Trilogy is a three-part film franchise and the start of India’s first original universe, the Astraverse, according to the film’s synopsis.

The trailer also features Mouni Roy and Nagarjuna Akkineni, who play crucial roles in the film. The story centers around Shiva, who has the ability to manipulate fire, and his encounter with a secret society that guards heavenly weapons. The trailer, which features anything from a fiery trident to an energy-created roaring bull, is heavily reliant on CGI. When a big evil emerges to seize control of the most powerful of the weapons, the Brahmastra, they seek his assistance.

The film tells the narrative of Brahmastra, the Lord of All Astras. Ancient forces such as fire, water, wind, and fire are introduced in the novel. Shiva encounters Isha, a lovely young lady who is completely unaware of his skills. He learns about a mysterious old light weapon and the guardians who guard him. However, evil seeks to destroy everything, and the dark world is attempting to acquire the Brahmastra.

The first half of the trilogy, which is part of Mukerji’s ‘Astraverse,’ follows the protagonist Shiva (Kapoor), who is in love with Isha (Bhatt). When Shiva discovers that he has a secret link to the ‘Brahmastra’ and a vast power within him that he doesn’t fully comprehend – the power of fire – his life is forever changed.

This year, Brahmastra Part One: Shiva will be released in theatres on September 9th. It’s a brand-new cinematic universe inspired by Indian mythology’s deeply embedded ideals and stories. The Brahmastra Astraverse is the beginning of the Astraverse, India’s first distinct universe.

Brahmastra, starring Alia Bhatt and Ranbir Kapoor, will be released on September 9th. Karan Johar produced the picture, which was directed by Ayan Mukherji.

The films are based on characters from Marvel Comics’ American comic novels.

It features some of the film’s most well-known actresses and actors, making it a compelling reason to watch the flicks in theatres. Amitabh Bachchan will portray Guru. Shiva, also known as DJ Daku or Agni Astra, will be played by Ranbir Kapoor. Isha, Shiva’s love interest, will be played by Alia Bhatt.

On June 15, the trailer for the sci-fi epic Brahmastra was unveiled. The teaser revealed not only strong performances from the ensemble but also an impressive level of CGI for a Bollywood picture. The trailer features the film’s principal characters, including Kapoor and Bhatt.

In under 7 hours, the trailer earned 1.8 million views and 186K likes. Sony Music India and Disney Plus India both invested a significant amount of money in promotion. The film was delayed because the studio wanted to make sure it was a big smash. Their admirers are even more ecstatic now that Ranbir Kapoor and Alia Bhatt have married. You can watch the trailer of Bhramshastra above.

On September 9, 2022, the film will be released in standard formats, 3D, and IMAX 3D. Brahmastra will be available for a year on Disney + Hotstar after a few months. The creators have the right to reveal any information concerning the OTT release. Brahmastra Part One: Shiva will be the first film released under the Star Studios name as a result of his rebranding.