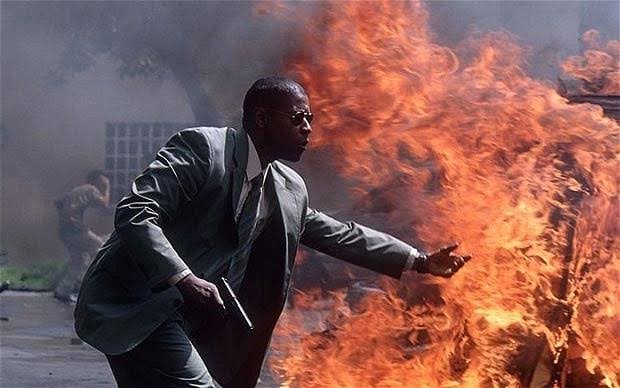 A 2004 action thriller film Man on Fire has a screenplay by Brian Helgeland and direction by Tony Scott. The film has an amazing cast and is set in Mexico. Denzel Washington plays John Creasy. John is a tired and sad former US Marine Corps Force Reconnaissance Captain and CIA special activities division Officer who now works as a bodyguard to Lupita or Pita Ramos, a nine-year-old girl played by Dakota Fanning.

Well, here’s what we know about Is Man On Fire Based On A True Story.

Is Man On Fire Based On A True Story

Unaware if this shall disappoint you but no this movie is not based on a true story. Instead, it is based on a Novel written by A.J. Quinnell. Interestingly this is not the only screen or movie adaptation of the book. Another adaptation was made in 1983 of the same one thus making this one a remake.

The original book is also not based on a true story. But it would not be entirely fair to say that this is all imagined. The author did take inspiration from two pretty famous kidnappings from that time. One of them was the abduction of the eldest child of a rich Singaporean Businessman. The man was asked to pay a huge ransom for his son to be given back home safely. However, the businessman was not as emotional and was more practical than the kidnappers had thought. To their shock, he straight up denied paying any ransom as according to him, paying ransom shall set the wrong precedent and thus endanger his other children.

Due to this, his son was killed but just as he thought no one ever threatened his children again for kidnapping.

Another source of inspiration for the central story was the abduction of John Paul Getty III. John was at the time the grandson of probably the richest man in the world John Paul Getty. The family used to reside in Italy. The abductors asked for a huge number as ransom. Something close to 17 million dollars. But the grandfather would not budge, for the same reason as our first example that it shall set a bad precedent and endanger the life of his other 13 grandchildren. Some also say that he was not budging as he suspected his grandson of staging this to get his money.

READ MORE: Is Old People Based On A True Story?

Although all his assumptions were falsified when he got his grandson’s cut ear in the mail one day. After that, his apprehensions were gone, and he ended up paying 2,2 million dollars for his grandson. This story inspired not just Man on fire but another movie called All the money in the world. But as A.J. was not writing a book strictly based on these two specific incidents rather his book used this as a central story or more of a base to establish the relationship between the kidnapper and the person from whom they demanded ransom.

So, he needed some intel on how a kidnapping actually goes down and what are the consequences. For this, he turned to the person he saved the life of on a plane ride one day. He connected him with the right kind of people. Why Itay? Because in the book the whole story is set in Italy as at that time Italy had some very notorious kidnappings. As the first movie was made close to when the novel was written in the movie the setting was used as Italy itself. But when it was remarked to the one, we are talking about Italy was not as notorious hence the creators changed it to Mexico. Because of this, a few other changes like the name of the girl were changed from Pinat Balleto to Pita Ramos.

Also, the ends differ or more appropriately to say are opposite for the central characters Pita and Creasy. In the book, Pita dies at the botched drop while Creasy fakes his death and begins a new life.

The story gets thrilling as our hero has to take tricks from his previous jobs and turn that officer man when Lupita gets kidnapped. Christopher Walken, Radha Mitchell, Giancarlo Giannini, Mark Anthony, Rachel Ticotin, and Mikey Rourke are some of the major supporting casts of the movie. The reception of the movie was not as good as the creators assumed but were still fair enough.

Ever since the movie was released it deeply impacted people and they just found it hard to believe that this was in fact a story the creator had imagined. Thus, their curiosity increased and they started to find out, and dig in to see if the story is really an imagined one or is based on some real events.

So, if you are one of those people too do not worry, we have got you covered. So, you have read the above and discovered all we have collected for you. And yes, you can watch the movie on Netflix.

The cast of this movie includes Denzel Washington as John W Creasy, Christopher Walken as Paul Rayburn, Dakota Fanning as Guadalupe Ramos, Radha Mitchell as Lisa Ramos, Marc Anthony as Samuel Ramos, Rachel Ticotin in the role of Mariana Garcia, Carmen Salinas as Guardian, Giancarlo Giannini as Miguel Manzano, Mickey Rourke as Jordan Kalfus. In addition to them, the movie also has Jesus Ochoa as Victor Fuentes, Gero Camilo as Aurelio Sanchez, Charles Paravanti in the role of Jersey Boy, and Maria Zaragoza as Jorge Gonzalez.

READ MORE: Is Vatican Girl: The Disappearance of Emanuela Orlandi Based On A True Story?