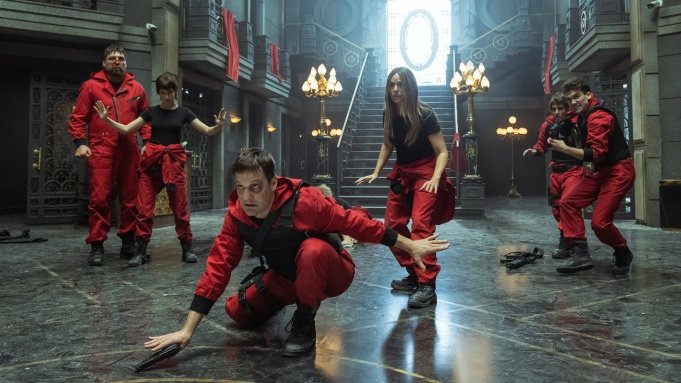 Money heist is a crime drama that streams on Netflix. The series drowned with immense love and popularity, especially in Lockdown Period. Countably there are several factors on which the series stood out. But the main factor of this series is its storyline. Which is carried away by one character that is ‘Professor’. Directed by and produced by Alex Pina. The story portrays a set in Madrid, and an intelligent person named ‘Professor’. He being 1st lead, recruits a group of eight people who choose city names as their aliases, to carry out their ambition of entering the Royal Mint in Spain and escapes with 984 million. The story gives us a moral message of not being rash in any situation and keeping calm to reach a goal. It got its popularity mainly during the lockdown after the release of its last series. As it is loved by the young generation mostly, it leaves a message of being patient to the Millennials.

Money Heist in Spanish ‘La casa de Papel was initially a Spanish crime drama series intended as a limited series told in two parts. It initially had its original release of 15 episodes on Spanish network Antena 3 from 2nd May to 23rd November 2017. And later, Netflix acquired its streaming right in late 2017. It reframed the series into 22 shorter episodes and released them worldwide. First, it got released on the 20th of December, 2017. Which made makers to brought the second part that is on April 6 of 2018. According to its growing intensity among the viewers, Netflix renewed the series with its increasing budget of 16 new episodes total in April 2018. Part 3 got released on the 19th of July 2019. Then after back-to-back part 4 also got released on the 3rd of April, 2020. And lastly, in July 2020, Netflix again renewed the show for the fifth and final part. The fifth part got released in two five-episode volumes on September 3 and December 3 2021 respectively. Altogether the series claimed to be the most-watched non-English-language show and one of the most-watched series overall on Netflix.

The series is noticeable for its subversions of the heist genre. While generally, the heist stories are mainly about male Anglo-centric focus, Money Heist reframes the story by giving it a Spanish identity and telling it from a female perspective by the character ‘Tokyo’. It didn’t follow the International taste as well, due to which it stood out different from regular American TV series. Emotional dynamics which include passion, impulsivity, friendship, and love have been explained in such a way that it sets it as a perfect strategic crime for keeping the tension of intensity.’ In November 2021 Netflix announced to create a spin-off series which will be titled Berlin and decided to be released in 2023 according to sources so far.

If a question of worth watching the series pops up?

It is a good show indeed! The reason why it is in the top 10 list of suggestions, is all about the professor coming up with commendable master plans. So, it is a must to exclaim this series to be a worth watching show.

It is always uneasy to say a final goodbye to a beloved show. But, Netflix’s most loved and profiting Money Heist announced its fanbase of the last series with a perfect amount of twist, intensity, and triumphs. The series ended on a note to the satisfying conclusion of portraying the Professor surrendering to the Bank of Spain. He surrendered himself to the forever angry colonel Tamayo waiting for the professor to negotiate his terms. Another factor for Tamayo was to know about the whereabouts of the gold. And it ended with a sense of emotion by letting people know about the actual treasure along with portraying the professor having tears of joy in his eyes. Because somewhere he knows that his parent proud of him.

Money Heist is a series that made the audience fall in love with every character. It is better to state that Money has formed two fanbases for the series and another for the royal most casting. It includes a good casting with several newcomers and experienced actors. Maximum of the characters received endless support and craze in the male-female roles. Beginning with the show-stealer of the show ‘The character El Professor who played the role of a master planner by Alvaro Morte. He is a Spanish actor and gained worldwide recognition after being a professor. Another most critically acclaimed and considered the strongest female character is Tokyo by Ursula Corbero. She is an actress, model, and best known for her role in Fisica o Quimica.

The next most popular character comes to the Character Berlin by Pedro Alonso who made his benchmark to be worth remembering. Other characters who are a part of this success are Nairobi and Alba Flores. Jaime Lorente as Denver. Alicia Sierra as Najwa Nimri, Luka Peros as Marsella and many more.