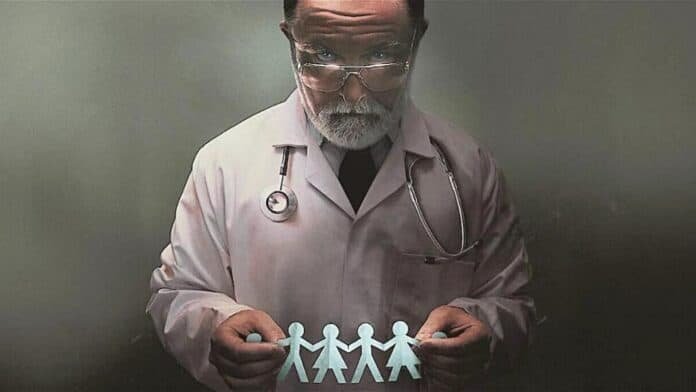 Our Father is the new upcoming movie on Netflix. It is a documentary film about a top fertility doctor from Indianapolis. Dr. Donald Cline, the famous fertility doctor, commits a grave crime. He conducts a sickening experiment that disrupts the lives of many.

The fertility doctor inseminated his sperm in his female patients without asking for their permission. Because of this horrible experiment, he became the biological father of at least 50 children. Decades later, these children demand justice for this deceit.

Our Father film is 1 hour and 37 minutes long. The documentary’s flow is from the perspective of Dr. Cline’s biological children. Our Father is an upcoming gripping documentary film from the Emmy-winning producer Jason Blum.

Is Our Father Based On A True Story?

Our Father is a Netflix true-crime documentary movie. The film is about a top fertility doctor, Dr. Donald Cline from Indianapolis, who conducts a horrible experiment that impacts many families.

Our Father film, based on a true story in the US, showcases the crime having no proper legal laws against it. Some parts of the Netflix documentary might be fictional, but the plot is real-life.

In 1979, Dr. Donald Cline opened his fertility clinic in Indianapolis. He kept a sickening secret. Instead of the donors’, the fertility doctor used his sperms in multiple cases. He inseminated his female patients with his sperms without their consent. Because of this mess, he became a biological father to at least 50 children.

In 2014, Jacoba Ballard took an at-home DNA test. She wanted to find her half-siblings. Jacoba was a single child in her family; she wished to have a sibling. But unfortunately, Jacoba got to know the reality before anyone else. She realized that she had not just one but many half-siblings.

MUST READ| Is The Terminal Based On A True Story?

In 2019, The Atlantic was the first to report this fertility fraud. The article detailed how the half-siblings found each other and joined forces to go on this quest. Jacoba Ballard was the first to start searching. She registered on an online forum for adoptees and donor-conceived children, where she found another woman, whose mother was Dr. Donald Cline’s patient. The test confirmed they were half-siblings. They all started connecting on Ancestry.com only to know the sickening secret of their DNA.

It was devastating for the fertility doctor Donald Cline’s female patients and their families. Everyone was shocked knowing a top fertility doctor from Indianapolis conducted a horrible experiment in the US.

Although it is a grave crime, it turns out that there are no proper legal laws against this. In 2009, Dr. Donald Cline retired from practice. In 2017, he got convicted of lying during the investigation about using his sperm to impregnate his female patients. In 2018, Dr. Donald Cline surrendered his license to the Medical Licensing Board of Indianapolis. The Board also banned him from applying to reinstate his medical license again.

Dr. Donald Cline got one year of suspension for two counts of obstruction of justice. Because there was no law against fertility doctors using their sperms to inseminate female patients, Dr. Cline did not pay any price for this crime. The fertility doctor is in his 80s and didn’t receive any penalty for his horrific act.

Netflix’s true-crime documentary movie will possibly also shed light on the mindset of committing something like this.

Our Father is a Netflix true-crime documentary film. Soon, Our Father film will join the ever-expanding documentary genre of Netflix. Meantime, Netflix released the trailer of Our Father film on April 14, 2022. And ever since then, the audience can’t stop talking about this horrific plot: A top fertility doctor, Dr. Donald Cline from Indianapolis, impregnates his female patients with his sperms without asking for their consent. The story is mindboggling. It is a mystery how no one ever know about this sickening secret for decades. Dr. Cline’s biological children try to find more about their family, only to stumble upon Dr. Cline’s horrific act.

On May 11, 2022, this true-crime documentary film will enter the Netflix universe. The audience is thrilled by the content produced in Netflix’s documentary genre. To watch this film, you need a Netflix account and subscription.

MUST READ| Is the Bombardment Based On a True Story?