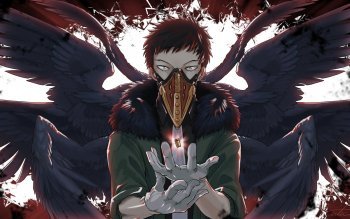 Who is Overhaul? Where can we find him? In this article, we will discuss all the answers to these questions. We will also look into his details of existence. To begin with, Overhaul is a villain and antagonist in the position of leader of Shie Hassaikai Arc in the anime called ‘My Hero Academia’. My Hero Academia is an adventurous anime focusing on the journey of a superhero. It is inspired by the Japanese manga series created by Kohei Horikoshi. The manga is still running since July 7, 2014, with it having completed thirty-three episodes. The show has gained immense fame and is embraced with heavy love by the audience. Directed by Kenji Nagasaki, Tomo Ōkubo and Masahiro Muka this show has been on several OTT platforms. There are multiple producers namely Kazumasa Sanjōba, Hiroshi Kamei, Naoki Amano, Hirokazu Hara, Natsumi Mori, Wakana Okamura, Kōji Nagai, Yoshihiro Ōyabu, Hayato Saga, Sōkichi Onoda, Mirei Tsumura, and Hiroya Nakata. It is a running anime with 113 episodes on the network of Adult Swim, Animax, JNN, NNs.

What is The Show Of Overhaul About?

The story has a remarkable visual impact and impression that align perfectly with its creative characters and plot. ‘My Hero Academia is about a world where everyone is accustomed to having special powers or superpowers called ‘Quirks’. These powers are widely spread and are commonly acquired by humans after the age of four. Individuals who furnish their power further and work on them more are seen turning into a hero and anyone who abuses the power is spotted as a villain. The story is about the journey and ride of a hero, of how an ordinary individual sets himself apart from the rest to give birth to a hero. The narrative outline is drawn around a boy named Izuku Midoriya. without any of these powers who was selected by the All Might to gain powers. As a result of rescuing his best friend unknowingly his mental bravery, strength, morality, and kindness were awarded by physical strength, stamina, and speed as the forces of the Universe brought him under All Might. The special powers not only gave birth to such heroes but also gave birth to negative forces of energy in the form of threatening and dangerous villains.

The overhaul was one such villain that was created as a negative balance to the story. His name was Kai Chisaki and was impactfully acted by the voice of Kenjiro Tsuda in Japanese and Kellen Goff, Caitlin Glass in English. He was one of the antagonists who was the boss of an opposing organization called The Shie Hassaikai. This arc of villains wants to takeover by overthrowing all the heroes. They planned to release a drug in the black market that will defeat the superpowers of the gifted individuals. The Overhaul was the psychotic and mentally unstable leader of this arc. His ‘Quirks’ include the power of distorting the form of anything and everything while also restoring their form and uniting his existence with others to trick them or use their quirks and powers. Although Overhaul was captured for trying to harm another character to make the drug he was sent to Tartarus after being killed. Episode 77 brings to light that he is not dead at all because he has been imprisoned in the prison of Tartarus by AFO. So, we can conclude without a doubt that Overhaul is alive even after all the reckless blockages in its way.

When Was It Released?

Studio Bones took up the responsibility of producing the anime adaptation of the manga series. The first season premiered in Japan on MBS and other networks. It came on every Sunday at 5 p.m. The second season of My Hero Academia premiered on April 1, 2017, on channels of Nippon Tv and Yomiuri TV, this was followed by the third season in April 2018. The fourth season premiered in October 2019. Its success led to the launch of season 5 in the year 2021 confirmed the launch of season 6 too.

Various creative clips and separate scenes of Overhaul are available on YouTube and other social media platforms. The show ‘My Hero Academia’ launched on many networks but is currently available on OTT platforms like Netflix, AnimePlanet, etc. What is your opinion on Overhaul? What do you think of his death? Let us know and do check out other articles about the anime world on our website.

Also Read : Where Was Jack and Jill Filmed? Know Here!