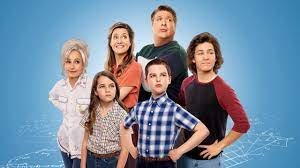 The Big Bang Theory is an American television series developed by Chuck Lorre, Bill Prady, and Steven Molaro, who also acted as executive producers and head writers. It premiered on CBS on September 24, 2007, and aired for 12 seasons and 279 episodes until May 16, 2019. Leonard Hofstadter (Johnny Galecki) and Sheldon Cooper (Jim Parsons), both physicists at Caltech, live in the same house with Penny (Kaley Cuoco), a waitress pursuing a career as an actress, who lives across the hall, and Leonard and Sheldon’s likewise nerdy and socially anxious companions as well as co-workers, aerospace engineer Howard Wolowitz (Simon Helberg) and astrophysicist Raj Koothrappali (Kunal Nayyar).

Before Sheldon got his own TV series like Young Sheldon, after introducing in The Big Bang Theory Sheldon Cooper become one of the five main characters of the series when it debuted in 2007.  The series, set in the late 1980s and early 1990s, is a spin-off prequel to The Big Bang Theory and begins with the character Sheldon Cooper at the age of nine, living with his family in East Texas and going to high school. Iain Armitage stars as young Sheldon, alongside Zoe Perry, Lance Barber, Montana Jordan, Raegan Revord, and Annie Potts. Matt Hobby was promoted to the main cast starting with the third season. The show’s narrator, as well as the executive producer, is Jim Parsons, who also plays adult Sheldon Cooper on The Big Bang Theory.

Is The Big Bang Theory And Young Sheldon Related?

Sheldon Cooper is a common character in both shows and serves as a link between them. Both series featured Sheldon, however, the Big Bang Theory introduced this character and made him so popular that he got his own show, which is still running, whilst the Big Bang Theory’s final 24th episode aired on May 16th, 2019, marking the end of the show’s 12 seasons. Young Sheldon is still going strong with 5 seasons and 11 episodes that premiered on January 13th, 2022, and are now accessible to watch on Amazon Prime.

Characters Featured In Both The Shows

In both series, there are a lot of characters who are the same. Marry Cooper (Sheldon’s mother), Missy Cooper (Sheldon’s sister), Meemaw (Marry’s mother), Professor Proton, and a slew of other characters appear alongside Sheldon. Because the two shows are interconnected but run at different times, each character may not be identical. Young Sheldon follows Sheldon’s early adventures as a 6-year-old boy genius, whereas Sheldon in The Big Bang Theory is an adult in every way. Sheldon’s behavior is essentially the same in both series. Both versions of Shelden, played by different actors, leave viewers wanting to learn more about this guy.

The Big Bang Theory depicts how adult Sheldon adjusts to life after spending so many years as a boy genius. The show makes no attempt to include easter eggs or references to Sheldon’s past. Only a few actors reprised their roles as the Sheldon family on the program, but the show never confused it when other actors played the Sheldon family because the time streams are distinct on both shows, giving the creators creative flexibility to show it in the most beautiful way possible.

Where To Watch Both The Shows?

Both shows are available for watching on Amazon Prime Video. Viewers from all around the world, especially the Indian audience, are enthralled by both shows. It’s a family show that may be enjoyed together. The new episode of Young Sheldon aired every Thursday.

As the big bang theory show no sign of return after 12 seasons but young Shelden is becoming more and more popular every day as the demand around the world for the show increase. The trailer and promos and both the series are available on YouTube as well as Amazon Prime.