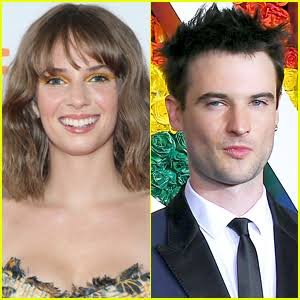 Who Is Tom Sturridge?

Tom Sturridge is an  English actor whom you might remember from the famous Gulliver’s Travels. He played a child in his first film directed by his father. From then on he only wanted to pursue acting. So he dropped out of college and starred in various tv series. Apart from his role as a child actor in Gulliver’s Travels, he is also known for his parts in several movies. These include Being Julia, Like Minds, and The Boat That Rocked.

His most awaited project is the new sci-fi series coming on Netflix called The Sandman. It is expected to come out in 2022.

Who Is Maya Hawke?

Maya Hawke is the daughter of famous Hollywood actors Uma Thurman and Ethan Hawke. She is a former model turned actress and an aspiring musician. She debuted as Jo March in the BBC miniseries adaptation of Little Women. However, her breakout role came as Robin Buckley in the third season of Netflix’s Stranger Things. We all love and admire Robin. We also saw her in Quentin Tarantino’s film Once Upon a Time in Hollywood.

Now to come to the real question. Yes, they are still dating each other. They had been rumored to be courting back in  2019. Though the rumors could not be confirmed. However, later in July 2020 had been clicked hanging in the Hamptons. Although, it was still not sure if they were just friends or if they were dating.

Finally, in August 2020, they were spotted cozy and kissing each other. Maya Hawke was seen wearing a pink floral dress and a straw hat. Tom wore a classic American look with a black t-shirt, blue jeans, and a baseball cap. They were seen walking on the streets of NYC while holding hands.

The duo also had masks on due to the coronavirus restrictions. The two photos that went viral from that day showed them walking arm-in-arm in one. The other one showed them kissing and being cozy. They appeared very happy and relaxed enjoying their day together.

And without much ado, their kissing photograph went viral. All doubts were cleared by this incident. But after this viral photo, they were not seen together for a long time. So doubts emerged again about whether they had split apart. Many of their fans had hoped that they are in a relationship. They shipped Tom and Maya as a couple.

Back on December 9, 2021, the couple was clicked again taking a stroll in New York City. The duo wore warm clothes and laughed and smiled under the sun as they walked together on the streets of New York City.

Needless to say, fans were elated. Since then they have been a steady couple.

They have been papped a lot of times following this which confirms them as a couple. However, neither of them has been open about their relationships. Fans are hoping that someday they’ll make this happy news public. Both their fans want to see more of them as a couple.

Tom Sturridge has quite a love life. Before news of him with Maya Hawkes became headlines, he was associated with Sienna Miller. They have dated back to 2011. Their relationship lasted for 4 years from 2011 to 2015.

This relationship also resulted in their beautiful daughter, Marlowe. She was born in July 2012. So even after their breakup they remain associated with each other. They are currently co-parenting their daughter. They were also seen together on the red carpet of the Tony Awards in 2021.

Who is Sienna Miller?

Before dating Maya Hawke, Tom Sturridge was with Sienna Miller. So you might ask who she is. Well to answer your question, she is a model turned actress.  You might know her from films such as Layer Cake and Alfie. She is also seen in Casanova, The Mysteries of Pittsburgh, Factory Girl, and many more.

She has even been nominated for

BAFTA and the Golden Globes.

Her most notable relationship before Tom Sturridge was with actor Jude Law.

She even got engaged in 2004. But later they broke up because of Jude Law’s affair with the nanny. Sounds very Hollywood-ish, I know. Their love was rekindled back in 2009 but for a short while only. They parted ways finally in 2011. After that Sienna started dating Tom Sturridge. This relationship did not last either. After this, she started dating and even got engaged to Lucas Zwirner. But unfortunately for fans, they have called off their engagement.