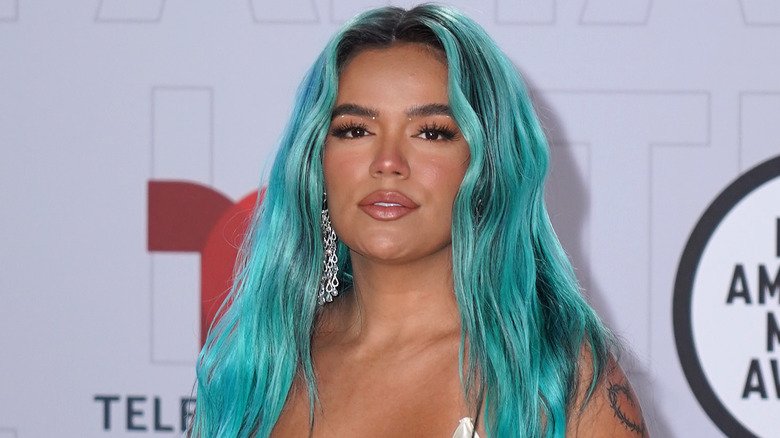 The Latin Reggaeton artist, Karol G is a big name in the Latin music scene. Since winning a Latin Music Award back in 2018, her career has never taken a step back. Karol G is not just singing but is also a songwriter. She is Columbian by birth. Along with her fundamental genre of Reggaeton and Latin Trap, she has also done some numbers on various other genres such as Sertaneja and just reggae music. The song that made Karol known to the public was ‘Lloro Por Ti, Ya no te Creo.’ And Karol G has even collaborated with big names in the pop industry such as Nicki Minaj (Tusa). The 31-year-old has a big presence in the Reggaeton genre. Aside from her music, Karol G is also big on the social media platforms worth about 26 million subscribers on her YouTube channel and a whopping 50 million followers on her Instagram page. Here’s what we know about Karol G Net Worth.

Read on to find out more about this artist and do not forget to keep yourself updated on your favorite shows and movies here at @poptimes.

When it comes to wealth, Karol G is one of the wealthiest Colombian artists. All thanks to a successful career and several years of experience in the industry. She earns huge amounts through her music album sales and concerts that she holds. Her debut album was a big hit titled ‘Unstoppable. Gradually she gained fans and followers in huge numbers. With 26 million subscribers on her YouTube channel, her Music Videos can easily reach a million views in a short period.

Some of her videos have also reached the ‘billion mark’. On top of that, she also does endorsement work for various brands such as ‘THE24K’, Ciroc, etc. Counting all of the above-mentioned sources, with such followers and fans her annual salary is estimated to be around 1 million dollars. And as of 2022, Karol G’s net worth is estimated to be around 8 million dollars. This makes the artist a millionaire.

READ: Ezra Miller Net Worth: How Much He Earns?

Karol G was born on the 14th of February in 1991, She is currently 31 years old. Karol G is the stage name for Carolina Giraldo Navvaro. She is Colombian by nationality and was born in Medellin, Colombia. Her music interest has been there since she was a child, she discovered her love for music when she was only 5 years old. Karol used to sing as a child.

As for Karol G’s education, she attended ‘Colegio Calasanz Medellin high school’. After graduating she completed her further studies, and she attended the University of Antioquia, Medellin, where she studied music.

At only 14, Karol G participated in the Colombian version of The X-Factor. She grabbed a whole lot of attention due to her singing ability. From there on, she was approached by various labels. And at the time Karol G signed with the ‘Flamingo Records’ labels at 14. This shows Karol G had a very early start in her music career. However, she decided to take her music career more seriously when she turned into an adult. She went to join the Big music label ‘Universal Latin Music’.

Unfortunately, at first, she got rejected. Which led her to drop her song ‘Ricos Besos’ independently. This was a hit in her home country. And after 4 years since she had been rejected by Universal Latin Music, she got signed with the label finally in 2016. Thereon, Karol G has dropped various hits which have made her a big part of the Latin trap and Reggaeton scene.

Who has Karol G dating and who is her current love interest? Let’s find out who could it be. We do not have much information on Karol G’s relationships before she became big. However, we do know that Karol G and Puerto Rican rapper Anuell AA, has dated and were even engaged till they separated in 2019.

Karol G met Anuel in 2018 while collaborating with him for the Album ‘Culpables’. The relationship was announced to the public via the music video for the single ‘Secreto’ from the Album. This was released in the later months of 2018. Since then the couple was seen to be together and deeply in love with each other. Shortly afterward they got engaged.

However in 2019, the pair split, Karol being the one who called it quits. Her reason for the break-up was the imbalance in their professional careers. She felt that Anuel’s professional life was doing much better than hers and that almost made her suffocate.

Karol G has not had any other links since Anuel AA.

READ: Which BTS Member Is The Most Popular In India? Can You Make A Guess?