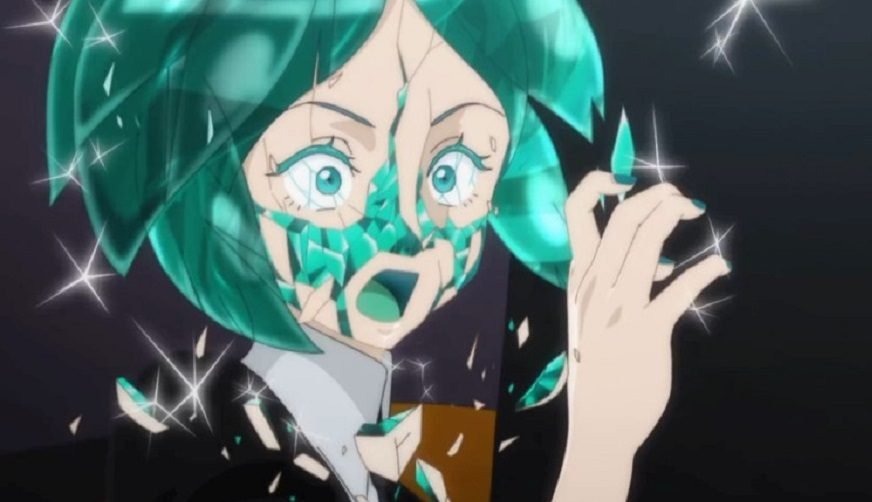 Hi all! Genki Desu? Well, the name of or even the topic of anime can make sick people get better and even lift one’s mood. Deso?

The anime that today we are going to talk about is a pretty famous one. Nor is the manga popular but also the anime is also mostly watched among its viewers and has a quite loyal fan base. So, what am I talking about? Let’s dive in then!

Houseki no Kuni, is adapted from a manga. The animation is produced with the help of computer graphics by the Orange Studio.

The action fantasy is written by Toshiya Ōno and directed by Takahiko Kyōgoku. The anime is produced by a series of people; Yōko Baba, Hiroshi Kamei, Yūichi Tada, Maya Fujino, Tomoyo Kamiji, Mika Shimizu, Yoshihiko Yamazaki, Hirotaka Kaneko, and Kento Yoshida. Phew a lot of them worked together to make the best out of it.

The anime made its debut in 2017, with a total number of 12 episodes run time being 24 mins each. Distributed by Orange Studio and Licensed by Sentai Filmworks and MVM Films; when are you watching this one?

Now before I go into why this is a must-watch anime. And share the story of the same. For those who have already watched it let me get back to you first.

If you’re thinking if the anime will have a comeback? Or when will season 2 make its way? Or is season 2 released? Is it canceled? Well, don’t think much and worry about it, leave it to us. You chill and go through the articles. Don’t worry I am letting you know before the article carries good news.

To answer this question of yours we will have to face two questions and look into them as a matter of fact.

Firstly, is there enough source material to continue with the story?

And secondly, how much profit will the team earn if they release a new season.

Now keeping all these in mind, let’s look into the date of its release.

First and foremost, season 1 of the anime wrapped up the premier by the end of December, the date being 27th December 2017.

It’s been four years since its release. But does that mean we will not get a new season?

Well first and foremost if we check the adobe factors, then. The anime has source material as the new and the latest volume in July 2020. So, the source material won’t be a problem as there is a story for the anime to cover.

Now about the profit. Although the volumes are making a huge sale. And season 1 is rated higher than average. But the producers fear that even if the anime returns with a new season, it won’t match their expected profit list.

They might gain profit but the thing is although the anime was a huge hit the profit was not up to the expectations. And they don’t even have Netflix backing them up.

But does that mean there is absolutely no hope? No, not at all. But all we can put in for now is, the anime is most likely to release its new season by the end of 2022. And since it’s been 4 years already, our haunch is, if the anime doesn’t arrive by the end of the year, then most likely the anime won’t ever return.

Land of the Lustrous Season 2 Cast

We can’t tell, much about the new season’s story other than the fact that it will follow the adaptation of the new volume. And with new volume publishing in 2021, there is a slight chance of the anime returning by 2022 end.

Then let’s have a look at the characters:

Well, these are the characters you are most likely to meet with.

Land of the Lustrous Season 1 Story

Meet the characters whose body is made with crystals instead of flesh and blood. In order to help them survive in an environment that is too toxic for the survival of humans. But are they safe, now that their body is made of crystals?

The answer to this is no. Now they have to be aware of the Lunarians, who hunt these crystals in order to make jewelry. Will the lives of these new kinds now be in danger?

Where To Watch Land of the Lustrous Season 2?

The anime is available for your watch in; HiDive, Amazon Prime Videos, or Gogoanime.

Watch this fantasy mystery Fall drama now guys. I have shared the trailer for your watch so that you can enjoy the anime after.

With this, I will draw an ending line. I mean you have reached the end. Keep visiting our page for updates and more, while we draft new news every day for you.