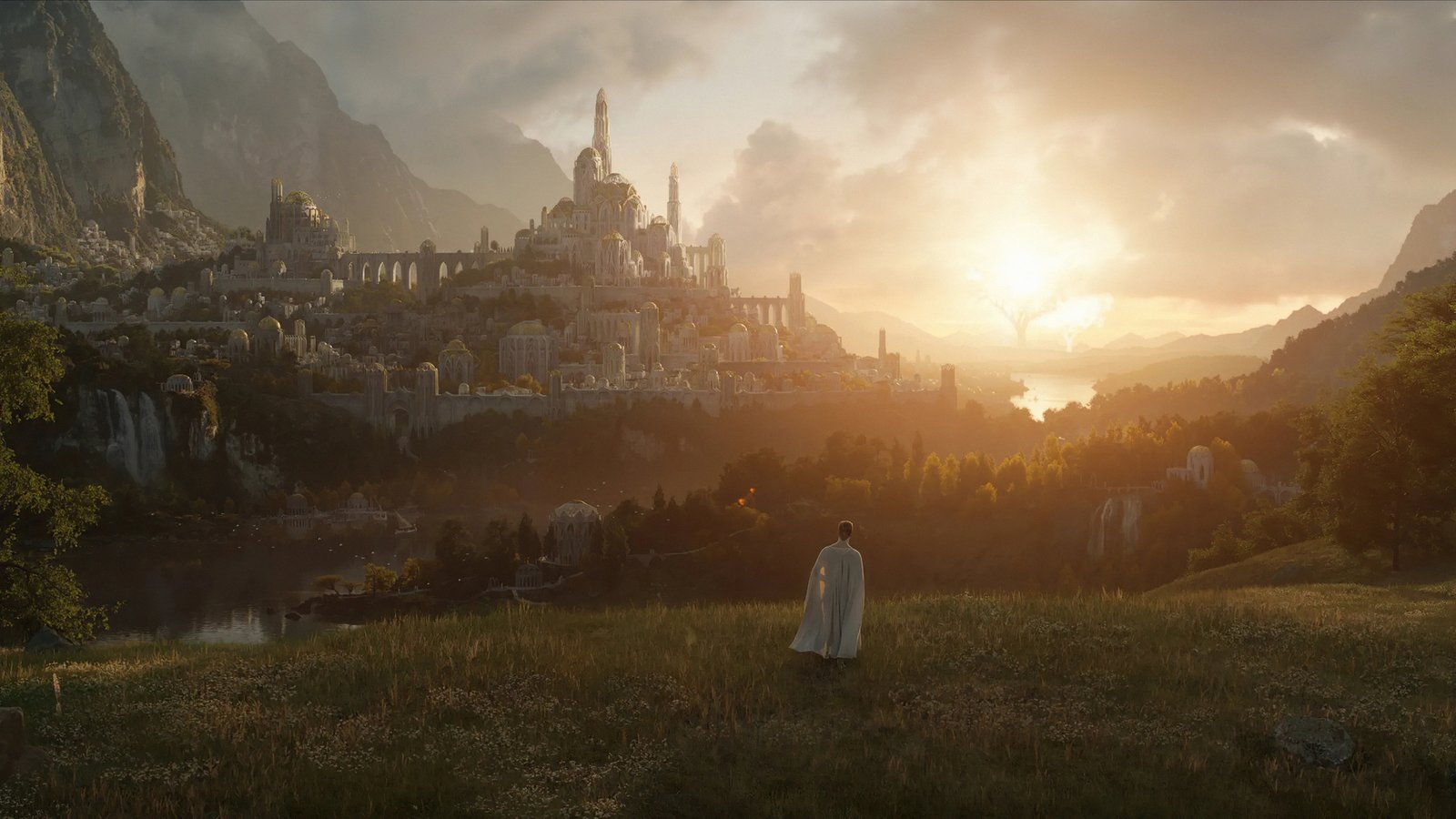 Bilbo, the hobbit that won over millions of hearts, needs no introduction. The dear little hobbit and his unexpected journey to the Misty Mountains were where it all began for the fans of the fantastical Middle Earth. But now it’s gone beyond that. As the story was handed over to Frodo, the dashing Strider, and Legolas in the Lord of the Rings Trilogy, we all thought that this was the end of the road for the LOTR fanbase.

But we were wrong! And oh, how overjoyed we are that we were!

The announcement of Lord of the Rings – Rings of Power last year brought with it a wave of euphoria and speculation. There are millions out there who live, breathe, and eat the whole Middle-Earth vibe on a daily basis and this news was nothing short of a miracle for them! A chance to go back to the very beginning and see young Elrond and Galadriel in action? Maybe find out why they are so close and fond of each other, you know what I mean?! And to witness the great event that kickstarted it all – the forging of the seven rings by Sauron. What Tolkien fan wouldn’t jump up and down with joy at that news?

But this happy news brought with it a hint of fear as well. Our hearts began thumping louder than ever with the echo of questions like –

Would they be able to do the book justice?
Would it be at par with the previous movies directed by the amazing Peter Jackson?
Would we be able to relate to the new characters?

These questions bubbled up in everyone’s minds putting a dampener on the excitement. But, the release of the first season of Rings of Power on September 1, 2022, put all those fears to rest! Because not only did the show meet everyone’s expectations but also exceeded them in every way possible. From cast to plot to setting, the Amazon Prime production team won it all with full marks in every score. And that delighted us to no end!

MUST-READ| The Sins Of Our Mother Ending Explained And More!

Lord of the Rings: Rings of Power Season 1 Ending Explained

We won’t lie though, watching Rings of Power was a bittersweet experience in the beginning because deep down in our hearts, we still expected old Gandalf strutting along the road of the Shire, ready to annoy dear Bilbo with ”I am looking for someone to share in an adventure!” We half expected Aragorn to surprise us with his brooding gaze and fast pace. But as the story progressed, that bittersweet feeling was replaced with an overflow of excitement about the new characters.

The story began with the Elves of Valinor marching onto Middle-Earth to fight against Morgoth, a threat to all kindness and light. The opening scenes were so beautifully captured, especially with Galadriel as a little girl alongside her brother Finrod. We were enchanted by these scenes in particular. Galadriel’s image, as per the previous movies, was of this beautiful and strong elf who could handle Sauron and all of his armies herself if she so desired! And now to see her under the protection and guidance of her elder brother was heartwarming to watch.

As the story progressed, Finrod died at the hands of Sauron, Morgoth’s most loyal servant, and overcome with grief and anger, Galadriel took it upon herself to defeat Sauron once and for all. So strong was her resolve that even a chance to see the magnificent trees of light back in Valinor again could not tempt her to go back.

With a sense of unfinished business, Galadriel jumped off her shit to Valinor only to be rescued by a Halbrand, whom we totally ship with Galadriel! They both give such enemy-to-lover vibes, but hey, we are only speculating really, for now. The rescue then leads to both of them being saved by a ship belonging to the Numenoreans. The scene when the ship sails through the magnanimous entry gates of the Land of the Star left us breathless for a moment. The cinematography is gorgeous. It’s just as fantastical as fantasy should be.

MUST-READ| Drifting Home Ending Explained: How Did Natsume And Kosuke End Up In A Fantasy World?

Parallel to Galadriel’s storyline and her quest to find out more about Sauron and where he is hidden, we get a glimpse of our darling Harfoots. Of course, the presence of Bilbo and Frodo was missed but we soon outgrew it after meeting the delightful Nori. You can see the rebellious streak in her peeking from within as she constantly gets into situations that she, as a Hrafoot, should not touch even with a six-foot pole.

But when Nori witnesses a comet flying right above her head and falling on the next village, she could not resist finding out what it is. As it happens, lying in the middle of the ground where it fell was a man, with a grey beard and a kind, long face. And our minds began jumping to conclusions the moment this mysterious character entered the story. Could he be Gandalf? He has got to be Gandalf!

But since there were three more episodes that needed watching, so we were sure we won’t get any answers for now. Keeping our disappointment in check, we soldiered on, much like Galadriel, to find her in a disagreement with Halbrand who, by this point, was definitely falling for the young elven commander.

We also found out more about the mark she found in the beginning and a few minutes of chat with Elendil in the Hall of Lore confirmed her suspicion. She was more sure than ever now that Sauron has neither accepted his defeat nor is he at rest. With the developments we saw in Arondir and Bronwyn’s plotlines, it was sure that orcs were back in Middle Earth. But what were their intentions for a sudden return? Elendil answered that question for Galadriel by informing her of their plans of building a tower for Sauron, a place for him to reside and grow his power and plan for the attack that we all know will soon come for all of Middle Earth.

As the story progressed, we made a few discoveries about the otherwise cute and gentle Harfoots. Turns out they are not as kind as all that. We all knew about the Harfoots’ unwillingness to interact with other races, especially Big Folks, and staying out of anything that could even remotely mean the same as ‘adventure.’ But when Rings of Power showed us the extent to which they take this fame of mind seriously left us in shock.

When the rest of the Harfoots got to know that Nori had extended a helping hand to the bearded man, they immediately turned against her and her family. Refusing to support them in any way, the whole family was banished to the end of the migration. And with Nori’s father severely injured, they were left stranded and alone in that large field. Thankfully, Nori’s kindness paid off and the man she had been helping came to their aid in the end. It was still a shock for everyone.

As we move forward, we witnessed a lot of tension in Numenor. Galadriel still faced issues with gathering support for the Sounthlanders while young Elrond was still trying to get During and his father to work with him and Celebrimbor to build the most magnificent palace Middle earth had ever seen. And we completely understood why they wanted to get the Dwarves on their team. That first scene when Elrond entered Erebor left us in awe of the Dwarves’ skills. To mine the vast depths of the mountains and make such a beautiful city inside? It was truly a delight to behold.

MUST-READ| Devil In Ohio Ending Explained And More To Know!

Not only that but Mithril was also introduced into the story which gave us massive bittersweet flashbacks of the first time Thorin gifted Bilbo the Mithril back in The Hobbit: An Unexpected Journey. Anyway, Durin showed his dear friend Elrond the ways and the qualities that that light yet resilient chainmail possessed but needless to say, his father wasn’t too happy with this decision on the young prince’s part.

And while the Dwarven king sent his son along with Elrond to find out what the Elves were cooking under their belt this time around, speculations on who could be Sauron and a desperate cry for confirmation of the Stranger to be Gandalf bubbled inside us. The show had definitely picked up the pace, loosely following the original mythology, and all the while keeping the viewers in suspense about the identity reveal of Sauron and, quite possibly, Gandalf. But one thing was quite certain, the story leaned towards setting up the set for a possible Galadriel and Halbrand romance. Was it nice to watch? Yes. Did it make us wonder about Galadriel’s husband? Yes, yes!

Battles arose, the first being the Battle with Udun. We can’t tell you how strange it was for us to watch a battle with orcs swarming in every direction and no Legolas or Gimli to lessen their numbers a bit. Still, it was as epic as a Tolkien battle can be without Gandalf on his white horse.

And yet, despite all of that, the season finale, Episode 8th, left us all in shock too many to count! The reveal of Halbrand as Sauron crushed our innocent hearts’ hopes for a romance between them. Halbrand was Sauron all along. And this piece of information left us questioning all the events that transpired up to that moment. For us, LOTR fans to see Sauron in the flesh, young and wicked in action was an experience that left all of us in a trance for a few seconds.

But that was not all. The bearded Stranger that Nori rescued said something about smells and noses and gave us major Lord of the Rings flashbacks, confirming what we always suspected. The bearded Stranger is, in fact, Gandalf! So cruel on the producers’ part to reveal such mind-boggling twists in the end and then leave us high and dry to wait for the next season which might not be out for another year. Cruel, indeed. But all we can do is wait now. Or re-watch the show again and again. The latter seems like a better option.

The show is available on Prime Video to Watch.