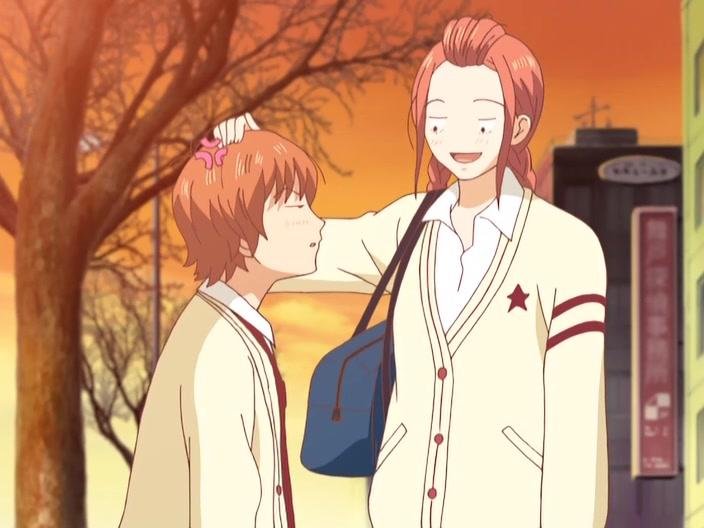 Lovely Complex is a rom-com anime with a distinguished plot. The light nature of the anime is refreshing yet filled with major emotional turns and the in-depth portrayal of insecurities and how they can affect someone and the person around them makes the anime more worthwhile to watch. Hilarious humor with proper timing and the chemistry shared between the main couple will make your heart melt as well as laugh like there is no tomorrow.

The name “Lovely Complex” sits well with the plot. Instead of just jumping into a relationship the main couple goes through a ton load of things, deal with serious issues first. Yet the story is sure to be one of the sweetest romantic stories out there. Its simplicity is what makes it more special. How two people with different worlds around them fell in love with each other, overcoming obstacles, growing strong together, cherishing little moments, things like these make the anime special.

Lovely Complex was released on 7th April 2007. There are possibilities of there being a second season if the mangaka decides to write more. As of now, no announcements have been done regarding the show. Although according to a few Otaku communities people are still willing to watch Lovely Complex Season 2 as it has been close to their hearts. It is highly expected that Lovely Complex Season 2might never make a return.

The main couple of the series includes Risa Koizumi and Atsushi Otani. Risa being a tall girl and Otani being a short guy, at first, they were skeptical about them being companions. At first, they were the comedy duo of the class. Their friendship began when they joined forces to set each other up with their respective crushes, both of them failed apparently. Dejected at first they decided to move on but they ended up being friends. Teasing each other about height, hanging out with each other, they were having a great time.

Only before Risa realizes that she has started to like Otani. Otani being dense had no clue regarding Risa’s feelings. Risa on one side was falling head over heels for him, getting flustered, being fidgety and awkward around him. Risa was having a hard time being sure regarding what she wants to do. Finally, she confessed to Otani regarding her feelings, Otani at first being confused and all rejected her. He wasn’t ready to accept Risa as girlfriend yet. That broke Risa’s heart, but she didn’t give up she tried the best she could to win Otani’s heart, went out of her way to make Otani understand how she actually feels for him.

But still, when she noticed that nothing is paying off she started giving up on Otani. Otani at the time was conflicted and confused regarding his own feelings. But after a lot of hassle Otani finally realized even he likes Risa and he expressed his feelings to Risa by kissing her on a rooftop under a bright spectrum of fireworks. After their feelings became mutual, they went out on dates and all. While they were in a relationship a lot of obstacles came their way, though a bit unstable at times, they sorted things out and kept supporting each other through thick and thin times.