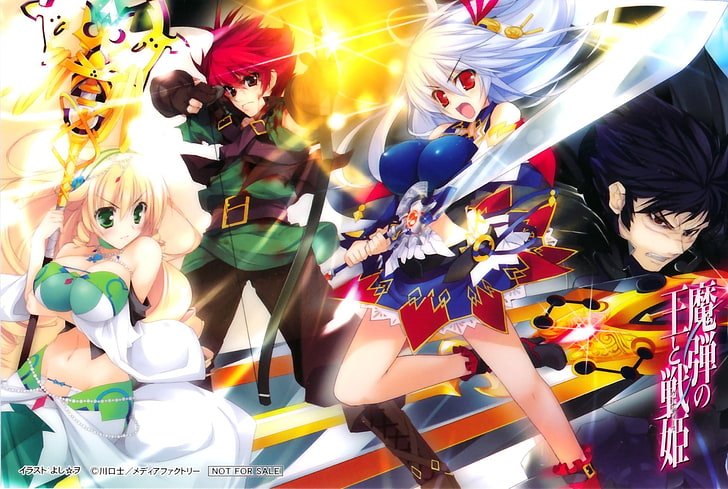 An interesting show with a war-based plot wrapped up with romantic and philosophical aspects is what the anime series of Madan no ou to vanadis provides. The show navigates through and deals with complicated political aspects, war politics, dark secrets, corruption, conspiracies etc. Based on the light novel series of the same written by Tsukasa Kawaguchi.

As of now, the anime series has only one season with a total of 13 episodes. The series brings on a deep adventure that deals with serious political issues which are close to reality. However, the storyline pacing is big rugged and there certain issues here and there. Here’s what we know about Madan No Ou To Vanadis Season 2 Release Date.

As of nothing about the second season of Madan no ou to vanadis is confirmed. So as of now, nothing can be said. Some fans are expecting an announcement by the end of 2021.

The plot of the anime is based in Europe, but this is not the Europe we are familiar with. The series is based on a fictional version of Europe which is entirely distinct from the real Europe. In the continent, as the story kicks off we get to witness a cold hostile environment between the countries of the continent. A continent is amidst a tense situation and is on the verge of falling into war.

The countries of the continent are standing on thin ice and a single crack would mean a war with utmost potential which will breed suffering and devastating consequences. The continent comprises many countries, and one country out there is divided into seven regions. The name of this country is Zhcted.

The country of Zhcted is divided into many parts and each part is under the rulership of War Maidens. These War Maidens are respectfully called Vanadis. Each of these seven regions of the country is under the rulership of an individual Vanadis. Vanadis are capable rulers who govern their respective regions with their own set of rules and regulations. Their rulership is independent of each other and they are free to rule however they seem fit regardless of what other Vanadis are doing.

Eleonora “Elen” Viltaria is a powerful Vanadis who happens to have her grasp over dragon-carved weapons which are extremely powerful and bear enormous devastating capabilities. Elen used to be a mercenary before she became a Vanadis. The region of Leitmeritz is under her authority and that’s the region of Zhcted she has under her rulership. Her sword which she carries to her battles has a special capability. The capability is not ordinary. The sword allows her to control the wind. She also leads an army named Silver Meteor army.

MUST-READ| Does Sydney Sweeney Have A Boyfriend?

Things started to get complicated as Elen declares war against the neighbouring country of Brune. Brune happens to be the rival country of Zhcted and both the countries see each other from a hostile perspective.

With the situation being complicated, a young skilled archer named Tigrevurmud “Tigre” Vorn emerged. Tigre has remarkable talent and skills when it comes to archery which makes him stand out from the rest of the crowd. He is also an earl for Alsace which is a region in Brune. He is a responsible person and follows his order like there is nothing else. He was bestowed with the duty to protect the region of Alsace from harm’s way.

Later on, after coming across Elen both of them clashed against each other and Elen emerged victorious which ended up with Tigre’s army getting slaughtered and wiped out. Tigre was the only survivor of his group since he was spared by Elen. Elen took him under her custody and Tigre became her “prisoner of war”. Elen orders Tigre to become her’s. However, after slight progress in the series, we get to see Elen getting impressed and gradually growing feelings for Tigre especially after witnessing his archery skills. And the story progress we get to see the chemistry and bond they grow between each other and how they deal with complexities and obstacles they come across.

Madan no ou to vanadis (season 2)  has no teaser or trailer available. The anime is available to watch on Hulu.

MUST-READ| Who Is Josephine Langford Boyfriend 2021?