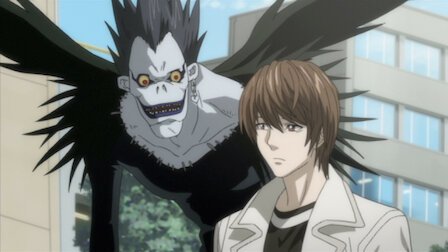 Death Note is a Japanese anime television series produced by Madhouse. It was directed by Tetsuro Arkai. The makers did not say any word about the renewal or the cancellation status of the second season of the show even though 14 years have already passed since the show was first released. The fans assume that the show has been canceled after one season.

The show has amazing ratings on various platforms. It manages to receive 9 ratings out of 10 on IMDB, 8.6 out of 10 on MyAnimeList.net, and 100% on Rotten Tomatoes. People all around the globe have praised the show. Even the critics have praised the show for its unique storyline. This anime was one of the series to win Best TV Anime at the 2007 Tokyo International Anime Fair. In the IGN’s Top 100 Animated Series list, this show grabbed the 51st position.

A high school student called Light Nagami finds a mysterious black notebook called Death Note. This book has the power to kill anyone as long as the users of this book know the face and the name of the target. He becomes terrified but to check its abilities he kills high-profile Japanese criminals. After this, he targets international criminals. After five days, Ryuk visits him who is the previous owner of the book. Ryuk is invisible and he tells Light that he had never touched this book. He dropped the book to the human world out of his boredom but now he is shocked by Light’s actions.

Criminals around the world started dying unexpectedly, the media assumes that only one mastermind is responsible for this and names him Kira which means killer. Interpol requests the assistance of an enigmatic consulting detective to help them in the investigation to find Kira. They all assume that Kira is based in Japan and L manipulates Light into revealing his location. Light vows to kill him and L deduces that Kira has in-depth knowledge of Japanese police investigation as his father is in the police. L suspects that Kira must be related to the families who are in the investigation. He assigns a team to investigate the families of those who are involved in this investigation and L learns Light as Kira. On the other hand, Misa Amane is an actress and a model who received a second death note. She wants Light to be her boyfriend but discovers that he is the real Kira. However, Light has another motive. He uses Misa to know the real name of L. It would be interesting to watch how this goes.

The main characters of the show include Light Yagami, Misa Amane, L, Ryuk, Near, Mello, Teru Mikami, Minoru Tanaka, and many more. There are also many supporting characters in the show which include SPK, Mafia, Kira Investigation Team, Associated of Kira, David Hoope, Taro Kagami, Criminals, and Initial victims, Shinigami, Sayu Yagami, George Sairas, Kanichi Takimura, and many more.

Fans of the show are confused about the way Light and Misa’s relationship is portrayed. Misa meets Light for the first time on the campus when she sees the real name of L. After this, her phone was stolen by L and she was captured in the suspicion of being second Kira. According to us, this relationship was one of the worst relationships in the show even though they were the only official pairing in the show. Their relationship was highly toxic as Light was just using Misa to know the real name of L to take his revenge. He manipulated her in many ways. Misa loved Light but it was clear that he did not love her. According to some fans, he is asexual.

We looked through YouTube and found the trailer for Death Note. If you want to take a look at it, all you need is to click on the link given above. Just tap on that link and the trailer will be played automatically.

Where to Watch Death Note Online?

In case, you want to take a look at the show, Death Note is available on Netflix for worldwide streaming. You can watch this show with a subscription account. As of now, it’s time to go and let us know in the comment section about your views and opinion about Light and Misa’s relationship. Happy Watching!