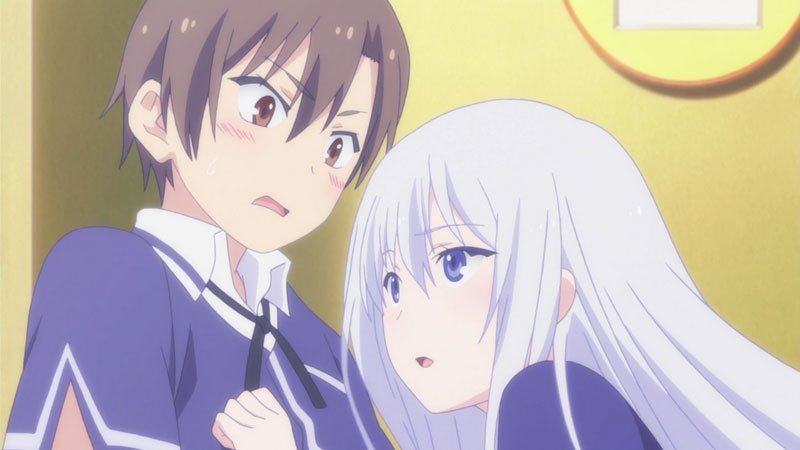 Looking for a light-hearted anime with a brush of high-school essence? Oreshura is a perfect fit! It is a jovial adaptation of a Japanese novel that is actually called Ore no Kanojo to Osananajimi ga Shuraba Sugiru which translates to ‘My Girlfriend and Childhood Friend Fight Too Much’ in English and is written by Yūji Yūji. The illustrations are done by Ruroo. Directed by Kanta Kamei, the anime adaptation is produced by Tatsuya Ishikawa and was launched by A-1 Pictures. The show enlightened the audience with a cute and engaging narrative of thirteen episodes. The episodes started airing on 6 January 2013 and continued till 6 January 2013. It was written by Tatsuhiko Uraha and the music was provided by Masatomo Ota. The characters are nice to look at and fit the warmth of the generic romantic comedy factor. One can stream the show on Crunchyroll where English subtitles are available too along with Japanese Audio.

The show has received worthy praise and has caught enough attention among weebs hence a continuation with season 2 is very much anticipated. There have been many talks about it but no official confirmation and is expected to launch in 2022. This is because the source material has still not been entirely covered so there is a vast scope. Let’s find out more about the adorable anime portrayal of Oreshura!

Eita Kado is a cynical high school that wants nothing to do with love and romance. He knows how to mind his own business and work on himself. There were two major incidents that shaped his personality and visions – the separation of his parents and a severe illness his childhood best friend suffers from. He sincerely works hard for his academics since he is pursuing a scholarship to get into medical school. But his life had other plans as a new character embarks upon him and his life, disrupting his plans. This character is named Masuzu Natsukawa who posed as a stunning beauty with glamorous silver hair. She has returned from Sweden.

She turns on her romantic charm and openly pursues the male lead, Eita. Eita had to give in as she had some secret of his with her and used it to blackmail him. But Eita later Eita finds out it was all an act since she just wanted to act committed so she could turn down all the guys wooing her without much fuss. The twisted fate of romance improves as a new delusional girl who claimed to be Eita’s ex-girlfriend enters the scene. As the title goes then the psychological and dramatic fights and mind wars start. Masuzu founded a club on purpose to pit the girls running for popularity against each other. Her hidden aim in this foundation is to embarrass those involved. Now Eita is stuck between handling his one fake relationship and his other affairs in life,

The animation of the characters was well portrayed as expected by A-1 Productions. The artistic effects and edits were also well in place. The characters are very appealing and suitable for a heart-warming romantic comedy watch! They are amicable and nice to each other. There is also the inclusion of humorous jokes in their conversations.

Let’s get introduced to the characters of the show now. As already stated above Eita Kidou is the most important character and protagonist of the show. He has brown shaded bangs as his hairstyle and big doe brown eyes. He has a strong will and determination towards his goal of becoming a part of the medical world and an equally strong dislike towards romance. The second character is Chiwaki Harusaki who goes to the same high school and has been the closest friend of Eita since his childhood. She has very pretty red-violet eyes and her look is enhanced by orange hair.

She always had feelings for her Eita but never gathered enough courage to confess it. She cherished her friendship with him a lot. She also becomes a part of the love triangle later in the show as she claims to know Eita better than the other. The third character and yet another important presence in the show are Ayi Fuyumi who has been acquainted with Eita since his childhood. She carries light pink hair tied up with a red ribbon. She claims to be a long-time lover of Etai who seems to have to separate due to family issues. The other major character is called Himeka who is delusional about being a lover from Etai’s past life.

The trailer will be available as soon as the makers make an official announcement about the release of the second season. Till then, stay tuned for further updates!