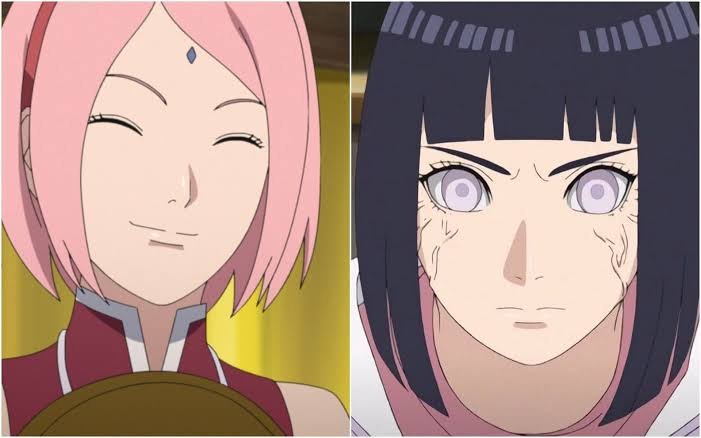 The Naruto series is a cult favorite manga and anime. And it has several interesting and exciting characters too. For those who do not know Naruto, it is a Japanese manga written and illustrated by Masashi Kishimoto. An anime was also aired starting in 2002. And fans loved it so much that the anime has received critical acclaim from fans all over the world.

The manga focuses on the fictional world of ninjas. And today in this article we will talk about two of the strongest female characters from the manga. Many know Sakura as Sasuke’s love interest and ship them together. But Sakura is one of the strongest ninjas in the Naruto universe. The same goes for Hinata. Fans love her and Naruto together. But as an individual character is no less than Sakura.

In the manga, both of these characters are very good friends and have saved each other on many occasions. But there are many fan fictions that explore the question of who is a better fighter. What would have happened if they would face each other in a battle? That is the question we are going to explore today in this article.

Both Sakura and Hinata are strong characters and have mastered a lot of techniques as ninjas. Both have special abilities which have helped them defeat a lot of strong enemies. In many instances, they have also helped the main protagonists in their fights. Both have very strong control over their chakras. So who would win? Let’s take a look.

We have often come across comparisons between male characters in manga and anime. Initially, we did not see many powerful female characters in anime or manga. But now many anime and manga feature very powerful female leads and characters. Two such characters are Sakura Haruno and Hinata Hyuga.
The question of this article is the point of interest of many fans. They are very curious to know who would win in a battle. Fans also have many theories regarding this topic.

And in this part, we will provide you with the answer after comparing the two characters on many points. No matter who your favorite may be, but when it comes to a direct fight between Sakura and Hinata, the probable winner of the battle will be Sakura. It would be a very intense fight indeed and both of them are well matched and possess great skills. If we are to give a simple reason, it would be that Sakura has more fighting experience than Hinata. And after all an experienced fighter has some upper hand in a battle. Let’s look at some detailed points of comparison between the two characters.

Read Also: Ezra Miller Net Worth: How Much He Earns?

First, let’s get introduced to the two characters properly. Let’s start with Sakura. Sakura Haruno is a kunoichi from the Leaf Village. She is a very important character in the manga and many consider her the female lead too. Sakura belongs to team 7 along with Naruto Uzumaki, Sasuke Uchiha, Kakashi Hatake. Sakura would go on to marry Sasuke and they would have a son together.

Although initially, she was the love interest of the protagonist and just comic relief, later on as the story progressed we see her character develop into a more mature and powerful ninja. This has been praised by many fans and critics and is seen as a great accomplishment of the manga series.

Sakura focused more on her studies and Chakra control so she didn’t learn combat much. This made her a liability on missions and she gravely depended on Naruto and Sasuke for protection. However, later on, she grew stronger and became a powerful Chakra controller. She could perform a Jutsu without wasting much chakra. Under Kakashi, she also learned how to come out of a genjutsu. She mastered this so well that later on, she could sense any time genjutsu was being used and could pull herself and others out of it.

Sakura was proficient in her Chakra which provided her with immense strength and speed. Under Tsunade’s training, Sakura grew to be powerful and a skilled Chakra user. She also learned the Summoning Technique which let her summon the giant slug Katsuyu. With its help, she could monitor and heal multiple wounded Chakras. She even had control over Earth, Water, Yin, and Yang Release and later learned the Fire Release too. Another of her powers included the use of fūinjutsu. This allowed her to plant multiple cherry blossoms which can restrict body movements releasing red chakra threads.

Another of her abilities is Medical Ninjutsu. With her excellent chakra control and intelligence, she could heal even the most fatal wounds, extract poison and perform complicated operations on a patient’s internal organs.

Read Also: Josh Groban Is Single? Who Is His Girlfriend?

Combining her chakra-enhanced fists with her medical ninjutsu she could deal some fatal blows to her enemies. And with the Strength of a Hundred Seal, she heals her own body without having to stop for medical examination or help. It can even make her resistant to battle injuries. When it comes to intelligence, Sakura’s skills and intelligence can be seen from her days in the Ninja Academy.

She finished the first phase of the Chūnin Exams quickly and earned the highest grades in the Academy. She can also set complicated traps for enemies and make deadly poisons. Sakura can perform medical autopsies and carry out investigations with her immense knowledge of genetics.
Thus with all of her powers, intelligence, and photographic memory, Sakura is indeed one of the strongest characters in Naruto.

Now, let’s take a look at Hinata. Hinata Hyuga is the eldest daughter of Hiashi Hyuga. She has been brought up as the heiress of the Hyuga Clan. Hinata is also a kunoichi from the Leaf Village and belongs to Team 8. She has a younger sister Hanabi, a twin brother Hizashi and a cousin Neji. All these characters also play some important parts in the story.

Hinata has been trained from her childhood by her father and has grown up learning to lead the clan. However, due to some chain of events, this does not happen ultimately. Hinata would go on to be Naruto’s wife and they would have two children together in the future.

Initially due to her docile and timid nature, many took her to be weak and incapable of fighting. However, with Naruto’s constant inspiration and support, she quickly enhanced her powers and became a skilled ninja. Being part of the Hyuga clan she has some special abilities too. Being trained by her father since childhood, she has immense control over her Chakra. She trained to get special abilities like the ability to form water needles with her chakra around water bodies. She can form needles with them and project them.

Her powers enable her to match those of a medical-nins and thus she helped in performing the Four Corner Sealing Barrier. Being a direct descendant of the Hyuga clan, she also possesses the ability to touch and find the Tenseigan. This helped Naruto to destroy the Tenseigan while touching her hand. As a Hyugan, she also possesses a dōjutsu Byakugan which grants her a 360° view. This makes her an efficient tracker and scouter. She can also see across vast distances by focusing her ability.

Her Byakugan also allows her to pinpoint her attacks and identify any Genjutsu being cast nearby. The chakra sensitivity of her Byakugan also allows her to pick up the slightest presence of a chakra making her a skilled ninja. When it comes to physical powers, Hinata’s Gentle Fist fighting technique gives her intense powers. Hinata also has gained mastery over the Protecting Eight Trigrams Sixty-Four Palms, the Gentle Step Twin Lion Fists, the Eight Trigrams Vacuum Palm, and the Eight Trigrams Sixty-Four Palms.

Unlike Sakura, Hinata does not usually use Ninjutsu and her nature transformations include only the Fire and Lightning Release. But she also has some proficiency in medical ninjutsu too. She can heal wounds with the Mystical Palm Technique. When it comes to intelligence, Hinata has proved her worth in several places. She is a skilled tracker and scouter thanks to her Byakugan. Although she wasn’t a very bright student in the Ninja Academy, she trained hard to become a skilled and efficient Ninja.

Where To Read Naruto Online?

To catch all the actions and excitement of Naruto you have to read the manga. Naruto was originally serialized in Shueisha’s Weekly Shōnen Jump magazine. Currently, you can read the manga on their official website or any manga website.

Fans can also catch the anime series based on the manga on Disney XD, Viz Media, Netflix, and many other online sites. Naruto had a lot of different parts and you have to catch up on all the different parts now. This cult favorite manga and anime has a strong fandom which is growing even stronger day by day.

Read Also: Which BTS Member Is The Most Popular In India? Can You Make A Guess?