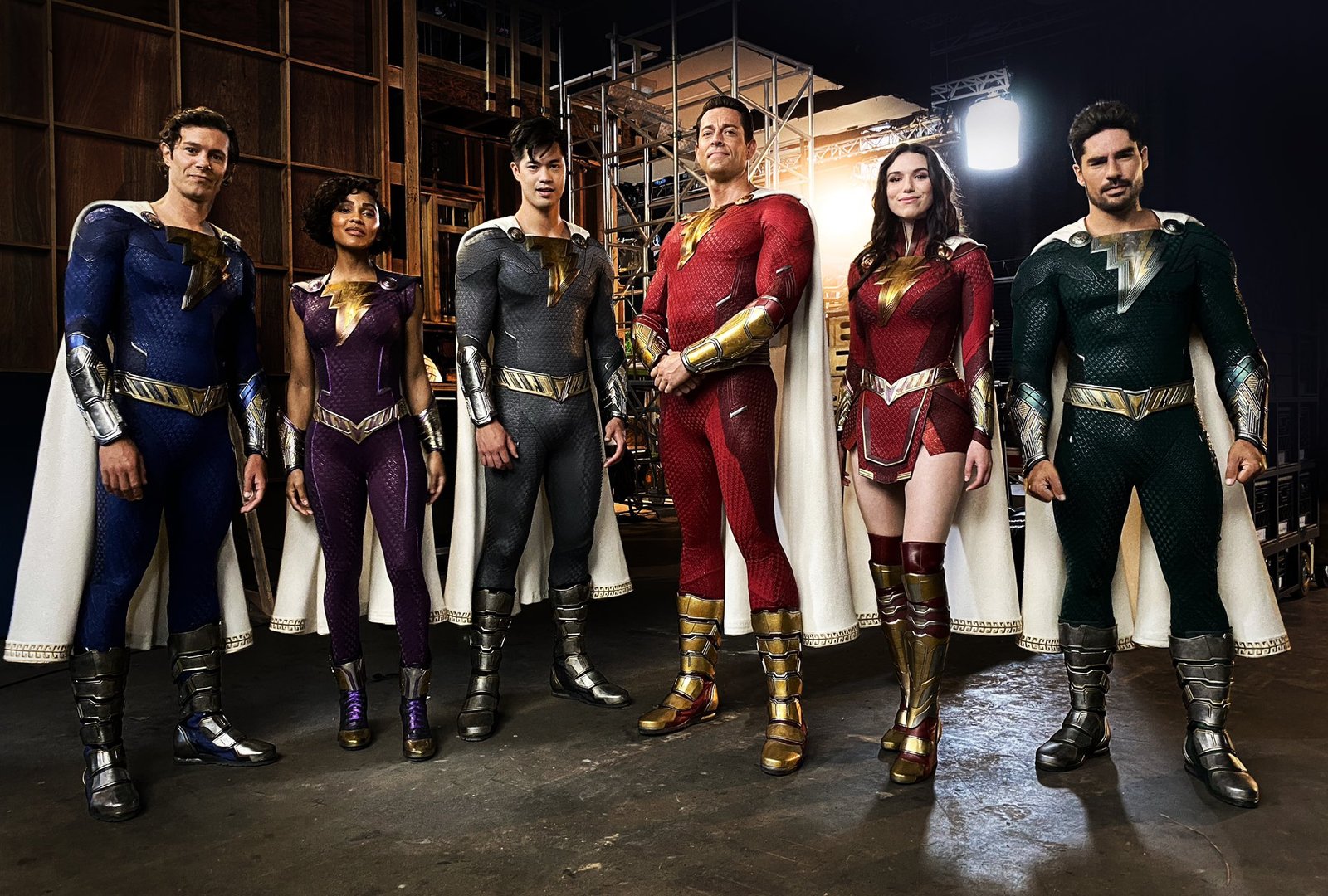 Shazam is returning with its sequel you all! Shazam! Fury of the gods is the title of the sequel to Shazam. The news that it was in development was already one of the big news for the fans and now the release announcement has just increased the excitement to another level. Here’s what we know about Shazam Fury Of The Gods Release Date

The superhero film of DC Extended Universe or DCEU is made on one of the famous characters of DC comics Shazam. The first film Shazam was released in 2019 and received positive acclaim from both the audience and the critics which was followed by an announcement that a sequel will be made. The sequel film is directed by David F Sandberg and written by Henry Gayden and Chris Morgan.

The anticipated film is being produced by DC Films, New Line Cinema, and The Safran Company. The distributor of the film is Warner Brothers Pictures. This movie is going to be the 12th film of DCEU and includes an amazing star cast with some recurring actors that you will get to know below as you continue reading. The film this time as well is going to be filled with humour, action, adventure, and fantasy making it a complete DC film.

The film has had a lot of date shifts bringing a lot of confusion and questions for the fans who have been waiting for it very patiently but now has been confirmed. The film is going to have a young touch with surprises and fun at least that is what one can understand from the shared footage.

We know you cannot wait anymore for the date reveal, so, get ready and say Shazam because this article will give you all the required details about the movie so that you can prepare yourself before the watch completely. So without any further ado, let’s raise the curtains from the information about the long-awaited film.

The long-awaited film by David. F Sandberg, Shazam! Fury of the Gods is all set to be dropped and revealed. Ever since the teaser has dropped the fans are extremely excited and I know you are too. If you have not been able to collect the date of release of the film in excitement then believe me you are at the right place. So, contain your excitement as I reveal the date.

The sequel to Shazam the part of DC Extended Universe will be released this year. Yes, you heard that right and the date of release is *drumrolls please* December 21, 2022, in the US. A part of your Christmas plan is set as the film is releasing during the month of reindeer and jingling bells. They are launching the movie during the holidays as they do not want the DCEU fans and Shazam fans to miss the first-watch experience. The film was initially planned to be released on December 16, 2022.

But the dates were changed and postponed because they did not want to have the date clash with another awaited movie Avatar: The Way of Water. Considering the immense popularity and grossing that the first Avatar did, the makers did not want to have any clash, thus the film was shifted to another date.

I know you must be feeling bad to some extent but isn’t it better than waiting till 2023 for the release? 2023 was the initial plan of the makers but then it was decided to launch this year. Thus, I guess it is much better to wait for a few months than to wait for a new year. So, mark the dates without fail to not miss the first day first watch experience.

Shazam Fury Of The Gods Story

The sequel to Shazam is called Shazam! Fury of the Gods’ development began after the predecessor film that received immense love from the fans. In 2021 the final filming started with all the cast members being confirmed in Atlanta. The film focuses on a major fight which includes heroes who are in their teen years under the supervision of Shazam and the daughters of Atlas.

Both parties will be fighting against each other. The young teen superheroes are none other than Billy Batson or Shazam’s foster siblings. The sequel would have been released early if covid would have not taken place, which halted everything including this movie. But thanks to the situation getting in control the audience will finally be able to see the film.

The film’s music has been developed by Christopher Beck as Benjamin Wallfisch could not return due to his packed schedule. Also, if speculations have to believe, then it is being said that there might be a cameo by Superman played by Henry Cavill, and if it is true then we cannot miss it at all. Now, in order to find out, what will happen and who will win, you will have to see the movie for which you need to remember the date so that you don’t miss the release and become a victim to the spoilers, which none of us likes or prefer.

Also, as you know this cannot be the only thing to see in the movie and many things are to be revealed. We have just been given some hints. So, do not miss out on the opportunity to find the whole story on 21st December.

Shazam Fury Of The Gods Cast

The cast of Shazam: Fury of the Gods includes highly talent-packed and skilled actors that are already creating a buzz as the announcement of the film’s release has been made. The list of the cast includes Zachary Levi who will be appearing in the role of Shazam. He possesses the wisdom of Solomon, with strength like Hercules, Atlas’s Stamina, Zeus’s power, and courage that reminds you of Achilles, and speed like Mercury; Asher Angel plays the role of Billy Batson.

He is a young foster child who just by saying Shazam transforms into a superhero; Jack Dylan Grazer will be playing the role of Fredrick “Freddy” Freeman. He is disabled physically and loves superheroes; Adam Brody will be presenting Freddy’s superhero form when he is an adult. The cast members include Rachel Zegler as Anthea, one of the daughters of Atlas, Ross Butler is the superhero form of Eugene Choi who is younger than Billy and is his foster brother, Meagan Good as the superhero form of Billy’s young foster sister Darla Dudley, and Faith Herman will be playing young Darla.

Other members include Lucy Liu, Dijimon Hounsou, Grace Caroline Currey will portray Mary Bromfield and Helen Mirren will be playing Hespera, who is another daughter of Atlas. Apart from them, you will also see Jovan Armand, D.J Cortona, Marta Milans, and Cooper Andrews. DCEU in terms of their cast selection never compromises and always brings amazing actors for us who do justice to their roles and to the film.

For this film as well the makers took a good amount of time to finalize the actors and their roles. It is the cast that makes the film reach its heights and DCEU is quite acquainted with this, which is why they never disappoint the fans.

Shazam Fury Of The Gods Trailer

The soon-to-be-released film’s footage was shown at CinemaCon which seems to increase the level of excitement among fans as the footages look promising and seem more magical. In terms of the trailer, the trailer was launched at San Diego Comic Con followed by Warner Brothers and DC who have already released the trailer on their official YouTube channel. The trailer shows the famous Philadelphia skyline and Philly.

The trailer gives hint that Levi as Shazam is suffering from imposter syndrome. He is also facing some issues with his powers. It will be interesting to find out whose power will really work in the fight. There is some trouble in keeping the family together too. The trailer also gives some recapitulation of the predecessor film.

Basically, the trailer itself looks quite amazing, powerful, and of course humorous with a lot of fantasy elements and action. So, if you haven’t seen the trailer yet then do watch it now to experience the thrill. The film definitely will be having a lot of CGI shots but then that cannot be avoided if fantasy feelings are to be provided.

Where To watch Shazam Fury Of The Gods?

The film will be released in theatres first in the US and then in other places. As of now, it has not been revealed where will the film be streamed. So plan your schedule accordingly so that you do not miss the release.

However, it is quite easy to guess that one of the places where it will definitely stream is HBO Max but then we cannot be sure until the makers reveal themselves. So, for now, you will have to prepare yourselves for cinematic viewing in film theatres.

Since you now know that the sequel to Shazam will be released, you might be thinking of rewatching the first part. If yes? Then you can stream the first part on HBO Max. Also, you can watch it on JustWatch.

READ MORE: Jurassic World 4 Release Date: Are We Getting Sequel To This Masterpiece?