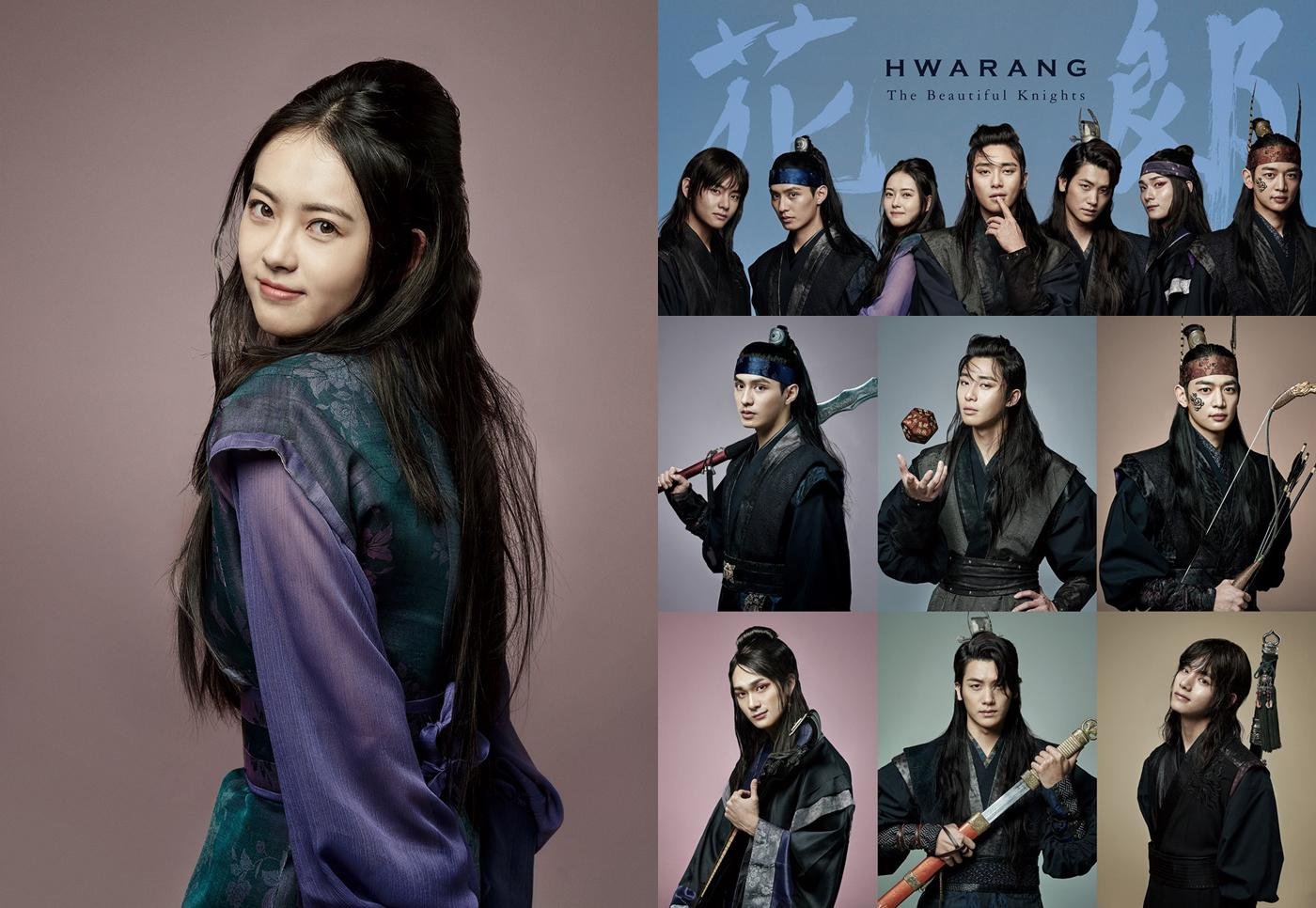 Hwarang: The Poet Warrior Youth Has been a great hit and has emerged love for Korean Historical Dramas in their Audience’s heart. The story of Hwarang is as follows:

Citizens, officials, and Sammaekjong himself have all grown impatient for the young King to relinquish power as he reaches adulthood. However, the powerful nobles who attempted to usurp power remain interested in the throne, and Jiso is afraid of the consequences of ceding it.

Jiso intends to create a new elite group, the Hwarang, that will cut across the existing power factions and bind them to protect her son and the throne in order to break the power of the nobles, who have grown accustomed to their privileges under the bone rank system.

So, If you Loved Hwarang, here are 8 more series like Hwarang That you can binge-watch.

During a total solar eclipse, Go Ha-jin (Lee Ji-Eun), a 25-year-old woman from the twenty-first century, is transported back in time to the Goryeo Dynasty. She awakens in the year 941, in the body of Hae Soo, one of the many princes of the ruling Wang family, during King Taejo’s reign.

She initially falls in love with the gentle and warm-hearted 8th Prince Wang Wook (Kang Ha-neul), but later develops feelings for Wang So (Lee Joon-gi), the fearsome 4th Prince who hides his face behind a mask and is labeled a “wolf-dog.”

As the plot progresses, Hae Soo becomes unwittingly entangled in palace politics and the rivalry among the princes as they vie for the throne.

They return to Goryeo after King Gongmin of Goryeo (Ryu Deok-Hwan) marries the Yuan princess Noguk (Park Se-young). They are attacked on their way, and the queen is killed. On the advice of his royal advisor, the king orders Choi Young (Lee Min-ho), Captain of the Royal Guard, to pass through a mystical portal (“heaven’s gate”) and find the “heaven’s doctor.”

Choi Young travels to the future and brings back Yoo Eun-soo (Kim Hee-sun), a modern-day Seoul doctor, to save the queen’s life. He promises to return her to her world once she saves the queen, but the royal advisor schemes and persuades King Gongmin to force Eun-soo to stay because she can help him.

As Eun-soo adjusts to her new surroundings, she and Choi Young fall in love with each other. However, as others become enamored with her as the “Heaven’s doctor,” Eun-soo becomes a pawn in the political power struggles between King Gongmin, the Yuan overlords, the sociopathic nobleman Ki-Chul (Yu Oh-Seong), and Prince Deok-Seung (Park Yoon-Jae), King Gongmin’s uncle. Choi Young, constantly putting his life in danger, foils numerous attempts by Ki-Chul and Deok-Seung to capture Eun-soo.

The series follows Choi Young and Eun-soo as they avoid and overcome impending problems, as well as whether or not they are successful in getting her to heaven’s door before it closes for good.

Set in a time when society does not allow females to be educated or employed, Kim Yoon-hee (Park Min-young) disguises herself as her brother, Kim Yoon-Shik, to help her family make ends meet. She works at a variety of odd jobs, mostly at a local bookstore, before being offered the opportunity to increase her earnings by acting as a substitute test-taker (an illegal act) for the upcoming entrance examination at the prestigious Sungkyunkwan, the Joseon Dynasty’s highest educational institute.

The series begins at the end of King Jinheung’s reign and ends with Queen Seondeok’s reign. Deokman was born as one of King Jinpyeong and Queen Maya’s twin daughters, but due to a prophecy, King Jinpyeong had to send his daughter away from the palace with the help of his clumsy but loyal servant Seohwa in order to save Queen Maya from being deposed by Mishil, who wanted to become Queen.

Seohwa raised Deokman as if she were her own, but a series of events led to Deokman discovering her true identity – only to be abandoned once more by her family in order to save the throne from Mishil’s clutches, with the exception of her twin sister Cheonmyeon, who died while attempting to help Deokman escape.

Deokman set out to reclaim what had been taken from her and avenge her sister by bringing Mishil down and becoming the first female king of Silla with the help of her trusted friend, Yushin, and troubled rogue Bidam, whom she loved, and eventually led a rebellion near the end of her reign due to a misunderstanding.

It tells the story of Hong Gil-dong, the son of a servant who stole from the rich and gave to the poor during the reign of famous tyrant King Yeonsangun, and his journey to becoming Joseon’s first revolutionary activist. Hong Gil Dong (Yoon Kyun-sang) is the son of a servant, Hong Ah Mo Gae, and thus has no legal standing in Joseon society.

With no opportunities for legitimate work despite his brilliance, Gil Dong becomes the leader of a gang of smugglers who steal from the rich and give to the poor. Yi Yung, Gil Dong’s contemporary, becomes the tyrannical King Yeonsangun (Kim Ji-Seok), who oppresses the lives of ordinary people. Jang Nok-Su (Lee Hanee), the king’s faithful consort, secretly pines for her first love, Gil Dong.

The Prince of Lan Ling is regarded as one of the four most beautiful men in Chinese history. He was known as the God of War because he led his army into battle and defeated his enemies while wearing a terrifying mask to hide his face. His real name was Gao Changhong, and he was a famous general during the Northern Qi period who was wise and loyal to his soldiers and treated them with great generosity and respect.

A prophecy predicted that the winner would be the one who received the priestess’ blessing. Yang Xuewu, the clan’s last priestess, unwittingly becomes embroiled in a conflict between Northern Qi and Northern Zhou.

Despite her prediction of a tragic fate for the Prince of Lan Ling, the military general of Northern Qi, she falls in love with him and aids him in his victory over Yuwen Yong, the Emperor of Northern Zhou. Her efforts, however, only bring him closer to his fate. The Crown Prince’s murderous jealousy grows as his standing among his people grows. Can she defend him when his family wants him dead?

During the Joseon Dynasty, King Yi Yoon’s long-awaited son is born, but in exchange for his life, the king will hand over control of the Bureau of Water Supply to the government’s secret society, the “Pyunsoo Group.” To protect the Crown Prince from the Pyunsoo Group, the king masks his face and raises him secretly.

Sixteen years later, Crown Prince Yi Sun, who grew up to be a respectable young man, removes his mask and leaves the palace in secret to investigate why he has been masked since birth. The goal is to meet with scholar Master Woo Bo, who is the only one who knows why. Crown Prince Lee Sun then befriends Lady Han Ga-Eun, the daughter of a high-ranking official, and a young man with the same name as himself, Lee Sun.

After some time, the Pyunsoo Group, a secret society, assassinates King Yi Yoon, but Crown Prince Yi Sun escapes. The Pyunsoo Group installs a phony king on the throne and controls him as well as the entire Imperial Court through the use of a suspicious drug with poisonous properties. After witnessing the people’s suffering, the Crown Prince resolves to fight the Pyunsoo Group and reclaim his throne.

The story of The Crowned Clown takes place in the mid-Joseon period when upheavals and power struggles over the throne had reached extremely destructive proportions. To avoid those plotting his assassination, the King installs a clown who looks exactly like him on the throne. As the clown settles into his role, the palace is upended as the King’s enemies are perplexed by the imposter’s inventiveness and his ever-expanding circle of allies, who are relieved to see the “King” finally become the ruler they have long desired.